The most important meal?

As Americans continue to fight the obesity epidemic and try to stem the incidence of type 2 diabetes, dietary guidelines are becoming increasingly important.

Among the possible keys to better health? Eating breakfast, for starters.

U researchers have found that eating breakfast daily or frequently is strongly associated with a reduced risk of developing type 2 diabetes, along with other metabolic conditions like hypertension and abdominal obesity. The study, led by Andrew Odegaard, a research associate from the School of Public Health’s Division of Epidemiology and Community Health, appeared in the journal Diabetes Care.

In other words, that age-old axiom that “breakfast is the most important meal of the day” may very well be true.

Not just ‘all or nothing’ 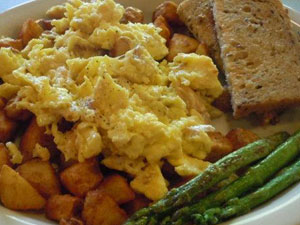 The study didn’t define what breakfast food is or needs to be, but it’s a good bet that asparagus would pass the test. Image credit: University of Minnesota

The researchers analyzed data from the Coronary Artery Risk Development in Young Adults (CARDIA) study, reviewing nearly 3,600 participants who did not have type 2 diabetes when their breakfast and dietary habits were assessed.

In addition, researchers found no evidence that the relationship between frequently eating breakfast and metabolic risk changed with a person’s overall diet quality.

Odegaard cautions that this was an observational study, “but it suggests that there could be something going on. And it was consistent across dietary quality; we saw the same thing with people who had the high-quality diet, too.”

He speculates that the potential health benefits of breakfast have to do with both the timing of the meal and the content of the food, and he hopes to do further research to clarify the roles of each.

“We think there’s some relevance to this,” says Odegaard. “When we have issues of obesity and diabetes and metabolic disorders in this country and throughout the world, is this a low-hanging fruit that has some relevance for dietary guidelines?”

If the answer is yes, you might be advised to grab that fruit and take a bite. Especially first thing in the morning.