Using ultra-fast laser pulses, a team of researchers led by UA assistant professor Vanessa Huxter has made the first detailed observation of how energy travels through diamonds containing nitrogen-vacancy centers – promising candidates for a variety of technological advances such as quantum computing.

A team of researchers led by University of Arizona assistant professor Vanessa Huxter has made the first detailed observation of how energy travels through diamonds that contain nitrogen-vacancy centers – defects in which two adjacent carbon atoms in the diamond’s crystal structure are replaced by a single nitrogen atom and an empty gap.

These “flaws” result in unexpected and attractive properties that have put such diamonds in the spotlight as promising candidates for a variety of technological advances.

The findings, published online in Nature Physics, could help scientists better understand the properties of these diamonds, which have potential applications ranging from quantum computing to the imaging of individual atoms in molecules. 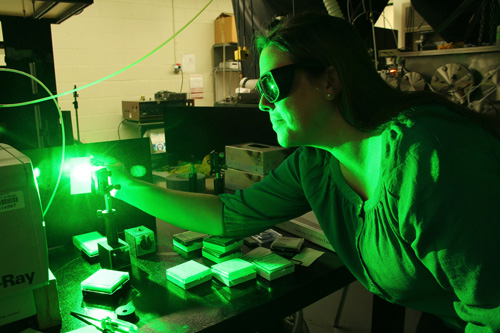 Vanessa Huxter uses ultra-fast laser pulses to study physical processes in diamonds that happen on a time scale of a few nanoseconds – billionths of a second. (Photo by: Beatriz Verdugo/UANews)

“Some of these defects have interesting optical and electronic properties,” said Huxter, who recently joined the UA’s Department of Chemistry and Biochemistry and led the research during a postdoctoral fellowship funded by the Natural Sciences and Engineering Research Council of Canada. Huxter did the research with co-authors Graham Fleming and Dmitry Budker at the U.S. Department of Energy’sLawrence Berkeley National Laboratory and the University of California, Berkeley.

Huxter said because the nitrogen-vacancy defects can be manipulated with optical methods such as lasers, they could be used for computing, data storage, sensing and even advanced imaging techniques capable of revealing the structure of molecules.

“In order to use this system for these applications, we have to understand its fundamental properties,” said Huxter, whose team is the first to study the ultrafast dynamics in these crystals in real time. “To use these systems for quantum computing, you want to have to some idea of what we call vibrational modes, because they determine the local environment and may possibly be used for information processing.” 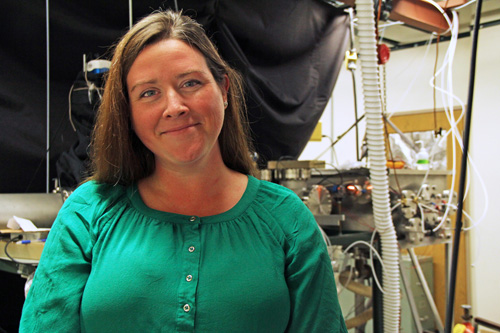 Vanessa Huxter just joined the UA’s department of chemistry and biochemistry as an assistant professor. (Photo by: Beatriz Verdugo/UANews)

To understand what that means, one has to picture the crystal structure of a diamond: a three-dimensional lattice of carbon atoms forming a highly ordered and repetitive structure. But the atoms are not glued into place. Rather, they vibrate back and forth as if connected by tiny springs. Wherever a nitrogen-vacancy defect interrupts the uniform carbon lattice, the vibrational properties change in ways that can be manipulated, for example by laser pulses.

“We use laser light to see what is happening in the system,” Huxter said. “When we hit these things with ultrafast pulses, it’s like hitting them with a hammer. We put a lot of energy into the system, and watch as that energy flows through it.”

The laser pulse knocks the electrons in the nitrogen-vacancy centers into a higher level of energy, which physicists call the excited state. Over time, the electrons fall back into their ground state, in a process called relaxation, while dissipating the energy into their surroundings. 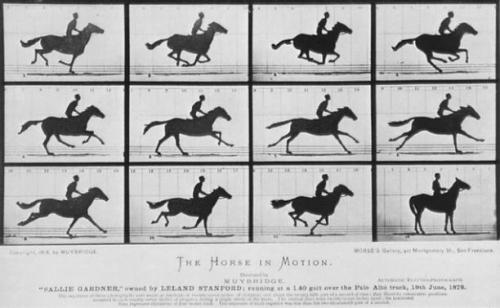 To watch how vibrations influence the ultrafast relaxation of the system, Huxter’s team used ultrafast laser pulses, because the relaxation occurs on a time scale of a few nanoseconds – billionths of a second.

Exactly how that energy moves through the crystal and how it influences the vibrations around the nitrogen-vacancy centers is crucial to figuring out how to take advantage of its properties, but nobody had ever been able to observe this process before.

“This is the first time we have been able to directly observe the vibrational spectrum of the system in real time,” Huxter said.

With her team, she employed two-dimensional electronic spectroscopy, basically a way of creating two-dimensional correlation “maps” that allow the researchers to watch the system as it relaxes to the ground state.

“Think of it as ultra-high-speed photography to freeze the action on a scale of atoms and molecules,” Huxter said. “We can watch the energy flow through the system in real time, and take snapshots along the way. We can see where the energy is going in and where it is coming out.”

In the world of ultrafast spectroscopy, which is reminiscent of the first high-speed photography developed by Edward Muybridge in the early 20th century to freeze the action of galloping horses, “nanoseconds are like a million years,” Huxter said, thanks to laser pulses lasting only femtoseconds. A femtosecond is one millionth of one billionth of a second. “In our experiments we were able to observe vibrations local to the defect with femtosecond time resolution. Being able to directly follow these vibrations led to some surprising new results including that these vibrations are quantum mechanically coherent for thousands of femtoseconds.”

“The question we ask is, what happens when you start replacing the atoms in the crystal?” Huxter explained. “Will you get a change in the elastic properties? Each nitrogen-vacancy center is like a softer region you can poke at. They absorb the laser energy where there was previously no absorption and we see all these extra vibrational modes we don’t see in the rest of the crystal.”

“In our scenario, the diamond is like a clear window. We look straight through it and only see the defects. We tailor our laser pulse to the absorption of the defects.”