November is just few months away. Two top candidates are getting busier with their campaigns. Election market is very hot at the moment. It’s all about going into the Oval Office. 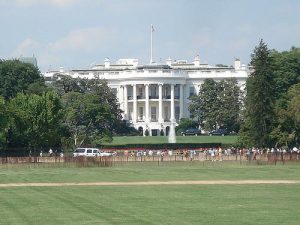 Clintons are decades in American politics. Mr. Clinton was twice in White House, Mrs. Clinton is now serving as foreign minister (in US it’s the Secretary of State) under Obama administration. They are experienced known figures in American and World politics. Mr. Trump, on th eother hand, is mainly a real estate business man. He is better known to the public through the reality game show ‘The Apprentice’ with his mark or symbol word “You’re fired”.

Could it be possible Mr. Trump apart from his business empire, got a powerful hand in the current election market too, with the know-how to gather the average American public on his side? The answer is: Could be. Although Mrs. Clinton because of her long and active political career fits better to take the Helm at White House, but in November ‘reality’ may take a different turn.

Mrs. Clinton however, doesn’t offer any bright look as President of the United States. If she will be elected, she will follow the same path like her predecessors, I mean America will not leave the war fields rather might get engaged into new warfare (with North Korea or China). She was directly involved with the so-called ‘Uprising’ against Libyan leader Muammar-Al-Gaddafi. She was often seen flyint to Paris to hold meetings with the then French President Nicolas Sarkozy and Britisch Premier David Cameron. The trio intrigued a ‘crooked’ plan to overthrow Gaddafi in the name of ‘Arab spring’ and now in ‘hot Arab summer’ everything looks more chaotic, ruthless and devasted. It’s reported that when Mrs. Clinton heard the news of Gaddafi’s death, she had a ‘crooked’ smile on her face.

The only thing she has in her purse is the ticket of being the ‘first woman candidate’ for Presidency in American history. But does it influence the campaign, I doubt. Emotions are too silly shows now-a-days, specially in current ‘disordered’ world situation. Although America is not directly involved in any war on its own soil, but its leaders are busy round the clock fabricating new wars almost in every continent in every siingle day. I guess a President Mrs. Clinton will not shun the path, and ordinary Americans somehow realize it now and this doesn’t make her a ‘hot’ candidate.

Mr. Trump seems like understanding the current sentiment of American people. He knows, the average citizens are someway tired of ‘traditinal politicians’ like Mrs. Clinton, who whatever promises after being elected get more engaged with wars outside than to solve home-grown problems that are piling up over the last decades. He has many cards on his table right now: anti-Muslim sentiment, unemployment, US trade policy, border with Mexico, relations with Russian are worth to mention among others. So Mr. Trump has a sound list of subjects for his election campaign.

The Republican candidate’s potentials and chances lie on two thinigs: He is very loud and aggressive (this is a huge potential for him) and he never held any high-level political position like Mayos or Secretary of State, so he had no chancnes to make any political mistakes and can’t be blamed for any scandals or occurrences associated with him. Mr. Trump will certainly make the best use of these two.

Although right now the election market is too hot regarding the ‘Khans family’ but for ordinary Americans, for unemployed ones in the streets, it may be anything else other than a ‘hot potato’. It will cool down soon, the next iteam will be on display, you will forget it all. In an ordinary daily life’s saga, it will make little or no influence at all on the voters. Khans son U.S. Army Capt. Humayun Khan sacrificed his life for America while participating in an illegal and unethical war invasion in Iraq. Why should it be an election issue now? Why should it matter?