Electrical energy fuels our modern lives, from the computer screen that keeps us up after sunset to the coffee maker that greets us at sunrise. But the electricity underlying our 21st century world, by and large, is generated at a cost — through the unsustainable expenditure of fossil fuels. For decades this demand for cheap, fast and non-renewable electricity has promoted pollution and global warming.

The key to reversing this downward spiral is deleting the “non” in “non-renewable electricity.” In a paper published May 24 in the journal Nature Communications, an international team shows that cheap energy in the form of solar cells is closer than we think, despite the long history behind the development of this technology.

“The traditional solar cells that are used commercially today stand on the shoulders of 50 years of research and development,” said David Ginger, University of Washington professor of chemistry and associate director of the UW Clean Energy Institute.

Fluorescence microscopy images of the same perovskite polycrystalline film before (left) and after (right) exposure to artificial sunlight. Shaded areas are regions with a higher number of defects. Those regions become brighter after light exposure, indicating that the number of defects has decreased. Image credit: Dane deQuilettes

Today’s solar cells — from the roofs of our homes to “solar farms” — are by and large based on the photon-converting properties of silicon crystals. While widespread, this technology is not as cheap and fast to produce as the fossil fuels we exploit today. Ginger, his team and collaborators — including scientists at UW, the Massachusetts Institute of Technology and the University of Oxford — want to upend this dynamic with non-silicon, ultrathin, synthetic crystals that are cheaper, faster and lighter.

The non-silicon crystals they use contain a unique mixture of organic and inorganic Earth-abundant elements. The crystals, termed “perovskites” after their unique arrangement of positively and negatively charged ions, are a promising lead in the next generation of solar cell technology. 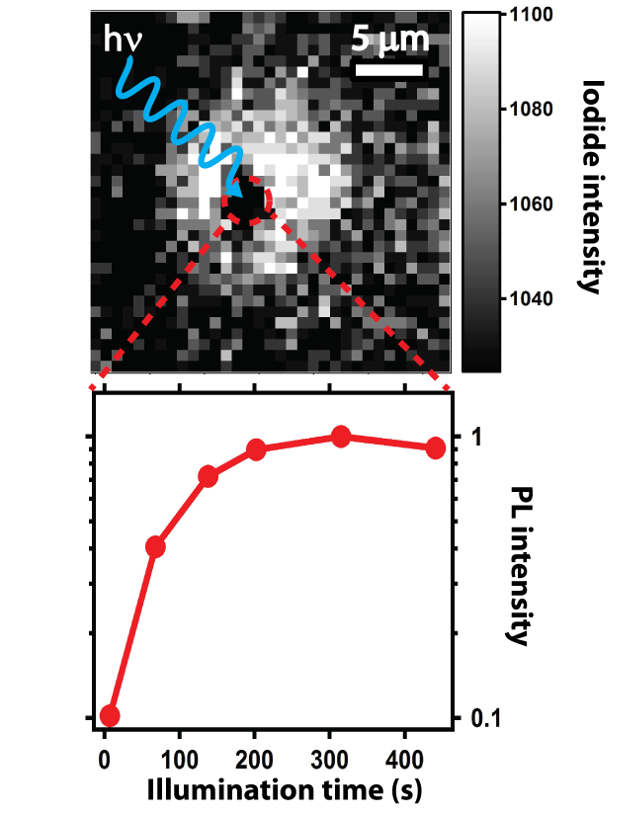 As the light emission from the film rises (dark spot at center), negatively-charged iodine ions, termed iodide, move away from the light. Image credit: Dane deQuilettes

But high efficiencies of perovskite crystals have only been realized on a small scale in the laboratory. To reach factories and consumers — especially for solar panels — they must last at least as long as today’s silicon crystals. That is a challenge that scientists like UW’s Dane deQuilettes are taking on.

“All perovskite crystals have defects — an inevitable consequence of the fabrication process — and we’re trying to come up with methods to repair them and improve solar cells,” said deQuilettes, lead author and a graduate student in the Department of Chemistry.

At just 1/100th the width of a human hair, the perovskite crystals that deQuilettes, Ginger and their colleagues work with are delicate and difficult to perfect. They’re rife with defects that decrease their efficiency, not counting the imperfections they accumulate over time.

deQuilettes and colleagues at MIT, including TED Fellow Samuel Stranks, sought out various treatments to reverse these adverse effects. In the process, they showed that the photons they shined on the perovskite cells had a therapeutic effect. Exposure to intense visible light increased the energy conversion efficiency of the perovskite crystals — and deQuilettes has proven why.

“We believe it all comes down to iodine,” said deQuilettes.

“We think many of the defects in these crystals lie along the surface, and that may cause negatively charged electrons to pile up at the crystal surface,” said deQuilettes.

“If that is the case, then when you shine light on the surface, negatively charged ions within the crystal — like iodide — will want to move away,” added Ginger. “That may explain how light helps these crystals heal, at least on a temporary basis.”

Under their experimental methods, light has only a temporary healing effect on the solar cell crystals. But Ginger, deQuilettes and their colleagues want to find processing routes or treatments that make their repairs permanent. Those endeavors — coupled with methods to expand ultrathin solar cell production — could make perovskites a viable and sustainable alternative to today’s silicon-based solar cell technologies.

“It’s exhilarating to work in a field that has the potential to revolutionize the solar energy industry,” said deQuilettes. “Now that we are learning how to heal defects, I think we are getting closer and closer to that revolution.”

Other co-authors are Victor Burlakov, Tomas Leijtens and Henry Snaith of Oxford University; Daniel Graham of the UW; and Anna Osherov, Vladimir Bulovic and senior author Samuel Stranks of the Massachusetts Institute of Technology. UW research was funded by the U.S. Department of Energy and the National Science Foundation.