Surprising but true. Top US Media outlets bias in favor of Hillary Clinton is larger than any ordinary voter’s understanding of election campaign neutrality. Now it’s beyond any Norm – nakedly wild.

Recent Wikileaks revelatioins of 65 mainstream journalists close affiliation with Hillary Clinton’s campaign is just a drop in the real ocean of ‘media corruption’. Now it all makes sense, why Republican Candidate Donald Trump passed through a rough time of ‘negative press image’ till today. Clinton’s campaign desperately used media power to ‘brainwash’ the American voters and went so far branding Donald Trump as the most ‘unqualified’ person to be elected as the US President. 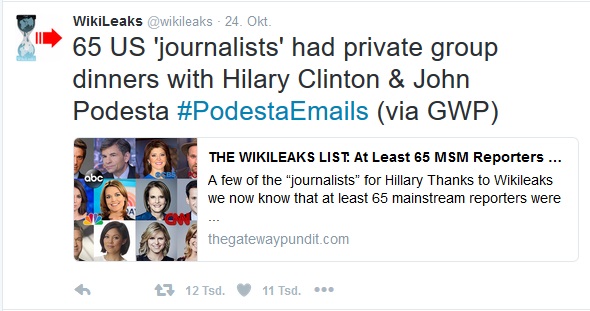 Let’s look at some of the top media headlines calling Trump ‘unqualified’ for the presidency:

The Washington Post (July 18) – Donald Trump is not qualified to be president. And the American people know it.

Politico (September 26) – Is Donald Trump qualified to be president?*

*This article is written by Politico’s chief political correspondent Glenn Thrush who, as The Gateway Pundit wrote, was sending the Hillary campaign articles for their review before publishing.

No wonder, Donald Trump got it all right – the election is being already rigged by the media!

Question is, is it the media that ‘decides’ the next president or it’s the people who will elect one of their candidates for the Whilte House?

The Election Basar 2016 – Boys, now ‘stand up’ and vote for Hillary Clinton 🙂