Mimicking nature is not easy, but new insights by researchers at the Department of Energy’s Lawrence Berkeley National Laboratory (Berkeley Lab) could help create a viable artificial system of photosynthesis.

One of the major challenges for scientists working to create systems that efficiently convert sunlight, water and carbon dioxide into fuel is finding materials that can do the work while also surviving the corrosive conditions that are part of the process. Existing methods to determine material stability have been hit and miss, but a Berkeley Lab-led research team has applied a combination of experimental and theoretical tools to rigorously determine how well a material will weather the harsh environments present in these systems. 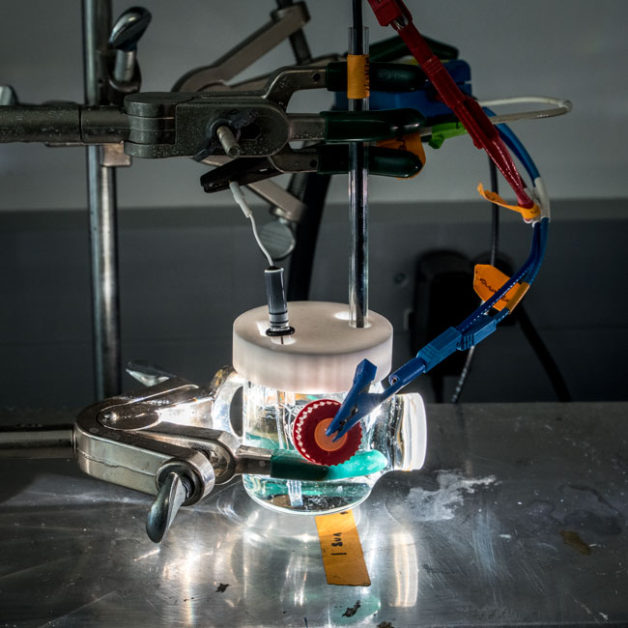 Shown is a photoelectrochemical cell illuminated by a solar simulator. A bismuth vanadate thin-film electrode is being tested in an electrolyte solution to mimic conditions in an artificial photosynthesis device. (Image credit: Paul Mueller/Berkeley Lab)

The researchers, part of DOE’s Joint Center for Artificial Photosynthesis (JCAP), describe their work in a study published Tuesday, July 5, in the journal Nature Communications.

“None of the existing methods to predict material stability were working,” said study lead author Francesca Toma, a Berkeley Lab staff scientist in the Chemical Sciences Division. “We need to develop a set of techniques that could give us a more accurate assessment of how a material will behave in real-world applications. How can we figure out if this material is going to last 10 years? Having methods that allow us to understand how a material degrades and to predict its stability over the years is an important advance.”

Artificial photosynthesis has a way to go to achieve the controlled, stable process of its natural counterpart. A key step in both natural and artificial photosynthesis is the splitting of water into its constituents, hydrogen and oxygen. In natural systems, stability of the components that perform this function is not required, since they can self-heal in living cells.

But unlike plants, practical solar fuel generators demand stable materials that do not need to be continuously replenished. Another consideration is that these devices need to operate in highly corrosive conditions that exacerbate the wear and tear on sensitive components. Unfortunately, most materials do not survive in these environments, and their performance degrades accordingly, the researchers said. 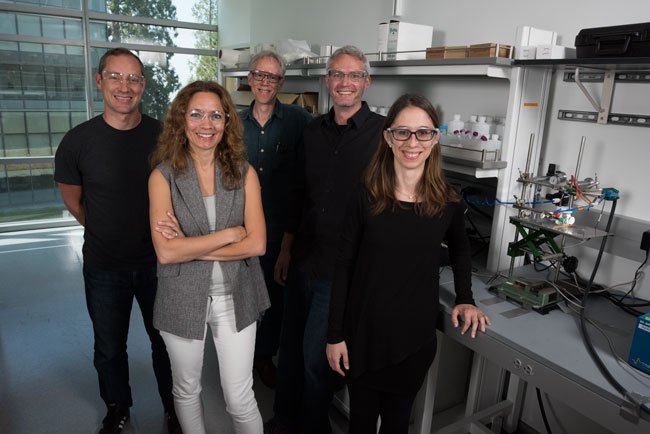 The scientists focused on bismuth vanadate, a thin-film semiconductor that has emerged as a leading candidate for use as a photoanode, the positively charged part of a photoelectric cell that can absorb sunlight to split water. Going by traditional approaches to predict material characteristics, bismuth vanadate should be resistant to chemical attack. It is not.

In reality, bismuth vanadate exhibits complex chemical instabilities that originate from kinetic limitations, which are related to the inability to structurally reorganize the surface phase such that it could reach a stable configuration under the operating conditions.

The scientists used carefully selected experimental methods to analyze bismuth vanadate before and after its use, as well as directly under operational conditions. They found an accumulation of light-generated charge at the surface of the film, which led to structural destabilization and chemical attack of the metal oxide semiconductor.

“For complex metal oxides, a significant structural reorganization is required to create a thin layer on the surface that can be thermodynamically stable, and that process can be very slow,” said Toma.

Shown is a cross-section of pristine (left) and damaged bismuth vanadate, a thin-film semiconductor, taken by a transmission electron microscope. The bismuth vanadate is colored yellow to highlight the contrast with the layer below. The yellow layer is intact on the left, but fragmented on the right after exposure to an alkaline bath. (Image credit: Matthew McDowell/Caltech)

“Today, bismuth vanadate is one of the best materials available for constructing photoanodes,” said Sharp. “Ultimately, though, we need to discover new semiconductors that can more efficiently absorb light and help drive the reactions that allow us to store energy from the sun in chemical bonds.”

The researchers added that one of the next steps in understanding these materials is to study the relation between the local chemical composition and performance over different length and time scales under operating conditions.

“Understanding the origin of the degradation process is crucial to designing materials that are more resistant,” said Persson. “It is our hope that this study will spark further improvements in the screening and development of new materials with enhanced stability under operating conditions.”

This work was performed at JCAP, established in 2010 by the DOE to develop a cost-effective method of turning sunlight, water and carbon dioxide into fuel. JCAP, a DOE Energy Innovation Hub supported by the department’s Office of Science, is led by the California Institute of Technology with Berkeley Lab as a major partner. Imaging work was done at the Molecular Foundry, a DOE Office of Science User Facility.