Billions of tons of carbon trapped in high-latitude permafrost may be released into the atmosphere by the end of this century as the Earth’s climate changes, further accelerating global warming, a new computer modeling study indicates.

The study also found that soil in high-latitude regions could shift from being a sink to a source of carbon dioxide by the end of the 21st century as the soil warms in response to climate change.

The research was led by Charles Koven of the U.S. Department of Energy’s Lawrence Berkeley National Laboratory (Berkeley Lab). He conducted the research with a team of scientists from France, Canada, and the United Kingdom while he was a postdoctoral researcher at France’s Laboratoire des Sciences du Climat et de l’Environnement. The modeling was conducted at a supercomputing facility run by France’s Alternative Energies and Atomic Energy Commission. 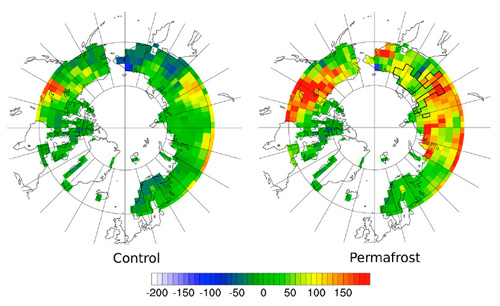 A sink becomes a source, as revealed by these two simulations of net CO2 fluxes due to climate change at the end of 21st century. The control simulation on the left did not include permafrost processes. The permafrost simulation on the right included processes that depict how carbon accumulates in soil and how it decomposes. In the latter simulation, large carbon losses are seen in central Canada where substantial permafrost stocks exist that are vulnerable to warming. Units are in grams of carbon per square meter per year. Image credit: Lawrence Berkeley National Laboratory

Their study was published in last week’s online early edition of the Proceedings of the National Academy of Sciences.

Their findings counter results from a comparison of models that was included in the Intergovernmental Panel on Climate Change’s 2007 fourth assessment report. The comparison found that climate change will spark a growth in high-latitude vegetation, which will pull in more carbon from the atmosphere than thawing permafrost will release.

But unlike earlier models, the new model includes detailed processes of how carbon accumulates in high-latitude soil over millennia, and how it’s released as permafrost thaws. Because it includes these processes, the model begins with much more carbon in the soil than previous models. It also better represents the carbon’s vulnerability to decomposition as the soil warms.

As a result, the new model found that the increase in carbon uptake by more vegetation will be overshadowed by a much larger amount of carbon released into the atmosphere. 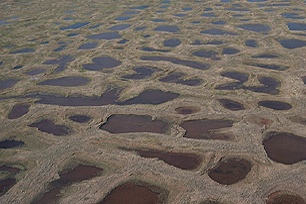 High-latitude soil such as permafrost hold vast quantities of carbon that could speed up global warming if it enters the atmosphere. Photo courtesy of the U.S. Geological Survey

“Including permafrost processes turns out to be very important,” says Koven, who joined Berkeley Lab’s Earth Sciences Division as a staff scientist earlier this year. “Previous models tended to dramatically underestimate the amount of soil carbon at high latitudes because they lacked the processes of how carbon builds up in soil. Our model starts off with more carbon in the soil, so there is much more to lose with global warming.”

Koven and colleagues set out to estimate how much carbon dioxide and methane (which contains carbon) could be released by boreal and Arctic land ecosystems as a result of climate change. These regions are crucial to the global carbon cycle because they are rich in soil organic carbon, which has built up in frozen soils and peat layers over thousands of years.

Much of this carbon is presently trapped and not cycling. But scientists believe that some of it could be released in response to warming and become a positive feedback to global climate change. At stake is an estimated 2,167 petagrams of carbon in all layers of high-latitude soil, which is more than two trillion U.S. tons.

The scientists modified a land surface ecosystem model called ORCHIDEE to account for how carbon behaves at different layers, such as at the surface versus 30 centimeters below ground. They also accounted for the rate of soil carbon decomposition as a function of temperature at the freeze-thaw boundary, which sinks deeper and deeper as soil warms. Other improvements include soil physics that more realistically capture the effects of organic matter on carbon. Most other models do not have all of these phenomena.

To determine how these processes affect the balance of carbon dioxide and methane in high-latitude soils, the scientists ran four simulations from 1860 to 2100, each with a different assortment of processes. They added in a middle-of-the-road climate change scenario that caused high-latitude surface soil to rise 8 degrees Celsius by 2100, which is much greater than the global average.

The simulations revealed a climate-induced loss of between 25 and 85 petagrams of carbon, depending on the processes included. The best estimate is from a simulation that includes all of the permafrost soil processes. It found that 62 petagrams of soil carbon will be released into the atmosphere by 2100, or about 68 billion U.S. tons. This release of carbon is equivalent to an additional 7.5 years of global anthropogenic emissions at today’s rate.

The simulation also found only a slight increase in methane release, which is contrary to previous predictions.

“People have this idea that permafrost thaw will release methane,” says Koven. “But whether carbon comes out as carbon dioxide or methane is dependent on hydrology and other fine-scale processes that models have a poor ability to resolve. It’s possible that warming at high latitudes leads to drying in many regions, and thus less methane emissions, and in fact this is what we found.”

Koven adds that there are large uncertainties in the model that need to be addressed, such as the role of nitrogen feedbacks, which affect plant growth. And he says that more research is needed to better understand the processes that cause carbon to be released in permanently frozen, seasonally frozen, and thawed soil layers. Researchers in Berkeley Lab’s Earth Sciences Division are focusing on improving global climate model representations of these processes under two Department of Energy-funded projects.

The research was supported by the Department of Energy’s Office of Science and project Impact-Boreal, which is funded by France’s Agence Nationale pour la Recherche and the European Union project COMBINE.