Pegloticase, a modified porcine enzyme, can produce significant and sustained clinical improvements in two out of five patients with chronic gout that is resistant to conventional therapies, researchers report in the Aug. 17 issue of JAMA.

In two controlled clinical trials, pegloticase rapidly lowered high levels of uric acid, the biochemical abnormality in gout, and kept it in the normal range for six months or more in 42 percent of patients receiving the drug every two weeks. Forty percent of patients had complete resolution of at least one of the painful swollen joint nodules, known as tophi, a hallmark of severe gout.

“This represents the first effective therapy for a group of patients who previously had no options at all,” said the study’s senior author, Michael A. Becker, professor of medicine at the University of Chicago. “This is for patients with severe gout, including major disabilities and high levels of pain. Many of these people had dramatic responses within months, some with complete resolution of tophi, as well as reduced levels of pain and disability. The rapidity of these outcomes is unheard of.”

“People are dramatically helped by the drug,” said rheumatologist John S. Sundy, director of the Duke Clinical Research Unit and lead author of the study. The drug’s response among patients who have failed common therapies is typically an “all-or-nothing result,” he added, “providing marked relief for those who benefit.”

Becker cautioned that “it’s not curative, but it resets the clock, moving the hands back on a patient’s struggle with a progressive disease.”

Condition rapidly on the rise

Once associated with European royal families, gout is increasingly a middle-class American disease, with connections to obesity, hypertension, diabetes, heart disease and alcohol abuse. An estimated 6 million people, about 2 percent of the U.S. adult population, have gout — a number that has increased by about 50 percent since 1990. 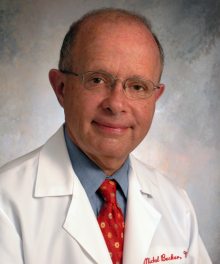 The disease is caused by a gradual accumulation of uric acid. When levels exceed the saturation point, uric acid forms tiny urate crystals, like thousands of little needles, which deposit in the lining of joints and other tissues. The crystals can cause inflammation, swelling and intense pain. A favorite target is at the base of the big toe, a common site for acute arthritic attacks and tophi.

There are medications for chronic gout that block the synthesis of uric acid or help the kidneys remove it. For about 3 percent of people with gout, however, these drugs either are ineffective or cause intolerable side effects. This leaves about 120,000 to 180,000 patients in the United States with chronic disabling disease and, until recently, no effective therapy.

Pegloticase—approved by the FDA in September 2010 for the treatment of severe, refractory gout—was designed to meet that need, filling a gap left by nature. Most species, except for humans and a few other primates, produce the enzyme urate oxidase (also know as uricase). This enzyme converts uric acid to allantoin, which is far more soluble in fluids and can be easily excreted. “It essentially digests uric acid,” Becker said.

Scientists at Duke, led by Michael Hershfield, developed the compound and spent decades to fine-tune the drug and usher it to market. They modified the version of the enzyme from pigs and wrapped it in polyethylene glycol to protect it from being degraded or attacked by the patient’s immune system. The coating extends the half-life of the enzyme from eight hours to 10 to 12 days, so patients need an injection just once every two weeks, making this drug suitable for long-term treatment.

When pegloticase is injected into patients with severe gout, their uric acid levels return to normal within 24 hours. This can lead to gradual dissolution of uric-acid crystals and eventual resolution of gout symptoms.

The two parallel clinical trials focused on 212 patients from 56 rheumatology practices in the United States, Canada and Mexico. They enrolled patients with severe gout and high uric-acid levels who were not helped by or couldn’t tolerate standard treatments. Patients were divided into three groups. One group was injected with 8 milligrams of pegloticase every two weeks, one group received pegloticase every month and one group got a placebo—injections of saline but no actual drug. All participants were enrolled for six months of treatment.

Forty percent of biweekly injection patients and 21 percent of those getting monthly injections had complete resolution of one or more tophi within six months, compared with 7 percent of patients receiving placebo. Patients who received the drug also reported improved physical function and quality of life.

Nine out of 10 patients, however, had at least one adverse event. The most common were gout flares—brief, treatable attacks of pain and inflammation. These declined after the first three months of treatment.

The second most common side effect, and the primary reason for patients to withdraw from the study, was an infusion-related reaction; 26 percent of treated patients, most of whom had already stopped responding to the drug, developed an immune response to injection of the foreign protein. Although patients were given medications to reduce the risk and severity of an immune response, about 5 percent of biweekly and 8 percent of monthly patients had a serious reaction. These all resolved completely.

Nearly all of the patients in the study had multiple cardiovascular risk factors and seven patients died during the trial period. The authors recommend “measures to stabilize cardiovascular problems prior to and during treatment.”

Most patients eventually developed antibodies against the drug, which suggests that it may be difficult to repeat treatment months or years later. Additional research is aimed at learning the optimum duration of treatment and bolstering the drug’s response in more patients.

Despite the risks, “this is an advance – a significant advance,” Becker said.

Sundy added: “This is a group of people for whom there has not been another option for a long time.”

The cost of pegloticase, sold as Krystexxa by Savient Pharmaceuticals, is about $60,000 for a year of treatment. Most patients complete treatment within six to eight months.

It may also be very useful for transplant patients, Becker said. About 10 percent of transplant recipients get gout and many can’t take the standard medications because they interfere with the drugs that prevent rejection.