*Organizations around the world are addressing cyberbullying — and digital safety overall — by empowering youth and providing educators with resources to help them navigate the digital world. Includes tips for preventing cyberbullying.*

Redmond, Wash. — Aug. 25, 2011 — For all the benefits that smartphones, computers and the Web have to offer — especially for young people who have embraced digital technology and use it every day — there will always be those who misuse the technology to harass others, including their peers.

Known as “cyberbullying,” this problem can occur at any time of the day or night, due to the always-on nature of the devices and technologies used to create these hurtful interactions. So, for some young people, home offers no respite from being victimized. In fact, cyberbullying has beome common enough that the term was recently added to the Concise Oxford English Dictionary.

While technology can help people monitor the problem, more needs to be done. A number of organizations worldwide are arming young people and educators with the tips and tools they need to help create a safer digital environment.

Cyberbullying and Its Consequences

In their book “Cyberbullying Prevention and Response: Expert Perspectives,” Sameer Hinduja and Justin Patchin, co-directors of the Cyberbullying Research Center, reported that one in five U.S. teens surveyed was a victim of cyberbullying in 2010. In addition, one in five teens admitted to being a cyberbully themselves.

While the media typically reports only on the most serious, tragic cases, Hinduja said such incidents are rare and only scratch the surface on cyberbullying and its potential long-term consequences.

Hinduja said the research he and Patchin have conducted shows a connection between cyberbullying and truancy, absenteeism, poor academic performance, eating disorders, school violence and delinquency. 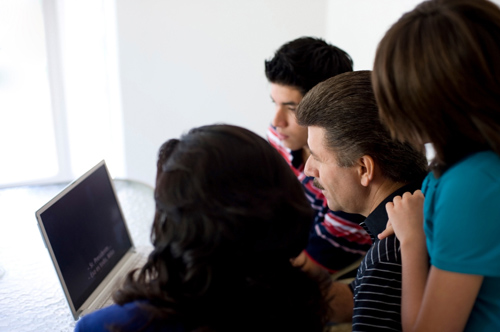 Keeping the family computer in a central location is just one of the ways to help keep children safe online. Image credit: Microsoft

“This isn’t just a flash-in-the-pan phenomenon, or something you can relegate to cyberspace. It’s something that has meaningful consequences for our youth,” Hinduja said. “So, we’re trying to understand it better, and then figure out how we can shape policy and programs.”

One program that tackles cyberbullying is CyberMentors , a U.K.-based project that trains young people to mentor peers who are victims of bullying.

The project is offered through Beatbullying, a nonprofit organization that, since 1999, has placed anti-bullying programs directly into schools and communities. Founded as an offline resource for young people, Beatbullying adapted its peer-mentoring program for online use to give young people a relevant, easy way to receive help.

“What we’ve been able to do is help any young person who is being bullied or cyberbullied. They can go online, talk to someone their own age, and get help immediately, in real time,” said Richard Piggin, deputy CEO of Beatbullying. “For a lot of young people, we’ve found they find it to be an invaluable source of support.”

Piggin said to date, the organization has trained 4,500 “cybermentors.” In the U.K. alone, some 11,000 others have expressed interest in volunteering their time and mentoring their peers.

“So many young people want to give back and support other children who are going through this,” Piggin said. “It’s now a question of how we are able to reach them and who we need to work with to reach all children, for whom cyberbullying is just as much of a problem as it is for British kids.”

Another part of creating a healthy digital environment is providing educators and parents with the tools they need to navigate the digital world. Both groups often are unprepared to handle or discuss cybersafety issues.

One such effort is Generation Safe, a project that is part of The Internet Keep Safe Coalition (iKeepSafe), a nonprofit alliance comprising more than 100 policy leaders, advocates, educators, law enforcement officials, and experts in technology and public health.

Generation Safe provides school officials with the training, resources and expert advice they need to quickly resolve any number of digital safety issues, including cyberbullying, school hacking, stalking and “sexting.”

The program offers professional development through online videos, step-by-step actions for dealing with cybersafety incidents, and a comprehensive self-assessment for schools that wish to evaluate and quantify their digital safety climate. In addition, these tools are designed to help reduce cyber-related incidents by addressing prevention, detection, intervention and post-incident management.

“It’s not enough to say ‘stand up and do something,’ ” said Marsali Hancock, president and CEO of the Internet Keep Safe Coalition. “You have to say, ‘Stand up, do something, and here are some options.’ ”

Microsoft provided startup funds for Generation Safe and announced its partnership with the project in November 2010 at the International Bullying Prevention Association’s seventh annual conference in Seattle.

Jacqueline Beauchere, a director in Trustworthy Computing Communications at Microsoft, said she and others within the company were impressed with the positive, pre-emptive approach Generation Safe takes toward digital-safety issues.

“It’s easy to look at an issue like cyberbullying from a negative position,” Beauchere said. “We wanted to flip it to the positive and help ensure that we’re giving people the tools and resources they need to get the best, safest online experience possible.”

Beauchere said Generation Safe is especially important because educators typically do not receive the training needed to efficiently manage cyber-related incidents. She pointed to a Microsoft-sponsored study from the National Cyber Security Alliance released in May 2011 that found 36 percent of teachers in the U.S. had no training in online safety issues in the last 12 months. In addition, 86 percent said they received fewer than six hours of training in the last year.

Teaching adults about digital safety is as important as teaching kids. Because today, many parents either don’t grasp digital safety issues or they are embarrassed to discuss technology they don’t understand.

Laura Banks is a mother of three in Derwood, Md., who has taken an active role in protecting her kids online ever since, in 2005, her then-seventh-grade son brought a school-provided laptop home.

Banks said that around that time, she began doing research and thinking more critically about digital misuse and how to help protect kids. She said it didn’t take her long to see that engaging in the digital world has real-life consequences and that while kids may have the upper hand in terms of technical expertise, it’s still up to adults to be good parents.

“Parents need to understand that when you’re giving kids a computer or smartphone screen, you’re opening them up to an entire world,” Banks said. “But, if you’re teaching them how to behave and engage and be kind and respectful and be responsible for their actions in this world, then that will carry over into their digital world if you make the link that the two are the same.”

Because many kids often do not receive the digital safety education they need at home, this responsibility often falls to schools. However, like some parents today, many of today’s high-level school officials were not raised in the digital world. So, unlike the kids in their charge, these administrators are not always as well-versed in digital devices, their functionality and their potential for misuse.

To overcome this digital, generational knowledge gap, some educators have embraced programs such as Generation Safe to better understand the digital environment and improve their ability to speak to children about safety, security, ethics and robust digital health.

Steve Giles is principal at Riverton Elementary, a magnet school for gifted children in Riverton, Utah.

Giles taught for nine years and has been an administrator for another 17. At 53 years old, however, Giles said he recognizes the gap between him and his students in terms of digital expertise. To bridge this gap, he is working to understand how technology is used and misused so that he can help keep his students as safe as possible.

“As much as I study and as much as I try to be on top of things, these kids are just so far beyond where I’ll ever get,” Giles said. “Generation Safe allows us to tap into resources, helps us think about situations that can occur that we haven’t even thought about and helps us be prepared so that we’re not always in a reactionary mode.”

In addition to iKeepSafe, Microsoft works with a number of organizations to help keep children safer online, including the following: