AUSTIN, Texas — The three-dimensional structure of a site on an influenza B virus protein that suppresses human defenses to infection has been determined by researchers at Rutgers University and The University of Texas at Austin.

The discovery could help scientists develop drugs to fight seasonal influenza epidemics caused by the common influenza B strain.

Their discovery also helps explain how influenza B is limited to humans, and why it cannot be as virulent as A strains that incorporate new genes from influenza viruses that infect other species.

The devastating flu pandemic of 1918, the pandemics of 1968 and 1977, and the avian influenza that emerged in the middle of the last decade were caused by influenza A viruses. Understanding features of influenza B virus that limit it to humans will help scientists better understand how influenza A strains are able to cross species. 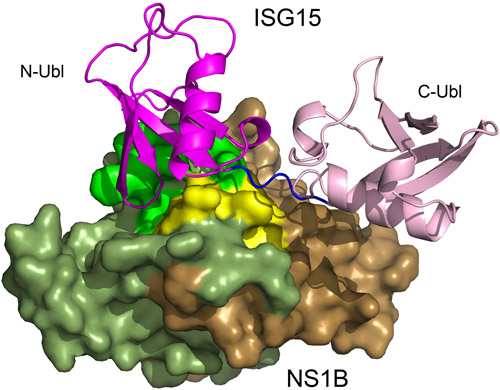 Three-dimensional structure of a complex between influenza B virus protein, NS1B, represented as the solid form, and the human protein that fights infections, ISG15, represented as pink and magenta ribbons and strands. The sequence of the ISG15 protein found only in humans and non-human primates, represented as a short dark blue strand, binds to the NS1B protein, immobilizing ISG15 and preventing it from fighting the virus. Researchers determined the structure using X-ray crystallography. Image credit: Rongjin Guan, et. al., Rutgers and The University of Texas at Austin.

The researchers have determined the three-dimensional structure of a complex between an influenza B virus protein and one of its human protein targets, resulting in suppression of the cell’s natural defenses to the infection and paving the way for the virus to replicate efficiently.

The findings are detailed in a paper published in PNAS.

“Our study shows the basis by which non-structural protein 1 of influenza B, or NS1B, binds to a human host protein, immobilizing it to prevent it from fighting the virus,” said Gaetano Montelione, a lead author and professor of biochemistry and molecular biology in the School of Arts and Sciences at Rutgers.

That human protein, known as interferon-stimulated gene 15 protein or ISG15, is an essential part of the defense mechanism that human cells use to protect themselves from viral infections. Chemicals that block the binding of NS1B to ISG15 may have antiviral potential against influenza B virus.

The study, led by professors Montelione and Robert Krug at The University of Texas at Austin, also reveals why NS1B cannot bind ISG15 molecules in other species, such as dogs or mice.

Only human and non-human primate ISG15 proteins have a unique molecular sequence in a small part of the protein that makes it possible to bind to the NS1B protein. So far, influenza B virus has been found only in humans.

“The three-dimensional structure of the NS1B-ISG15 complex, which we determined using X-ray crystallography, has given us a clear understanding of the molecular basis for this species specificity,” said Krug, professor and chair of molecular genetics and microbiology in the College of Natural Sciences.

“Flu infections continue to be a major health problem, with more effective drugs critically needed to treat infected individuals and control potential pandemics,” said Aaron Shatkin, director of the Center for Advanced Biotechnology and Medicine (CABM) at Rutgers and an eminent virologist. “This discovery opens new possibilities for achieving these very important goals.”

Participating in the study from Rutgers were Rongjin Guan, Li-Ching Ma and Brendan Amer, who along with Montelione are members of CABM and the Northeast Structural Genomics Consortium. They were joined by Paul Leonard of the Robert Wood Johnson Medical School, University of Medicine and Dentistry of New Jersey, who is also a member of CABM and the Howard Hughes Medical Institute. Participating from The University of Texas at Austin were Haripriya Sridharan and Chen Zhao, who along with Krug are also members of the university’s Institute for Cellular and Molecular Biology.

Montelione is the Jerome and Lorraine Aresty Chair in Cancer Research at Rutgers, an endowed chair established to support Montelione’s research efforts in the general area of cancer biology research. Significantly, some of the human proteins that are targets of the influenza virus’s defense mechanisms, like ISG15, are also important in cancer biology. Krug is the Mr. And Mrs. Corbin J. Robertson, Sr. Regents Chair in Molecular Biology at The University of Texas at Austin.