The gut bacteria of honey bees have acquired several genes that confer resistance to tetracycline, a direct result of more than five decades of use of antibiotics by American beekeepers and a potential health hazard for bee colonies, a new study by Yale University researchers show.

The genetic analysis of the gut bacteria, which are believed to help in bees’ digestion and ability to ward off parasites, suggests changing antibiotic use by beekeepers might be one factor in the mysterious colony collapse disorder afflicting bee populations. 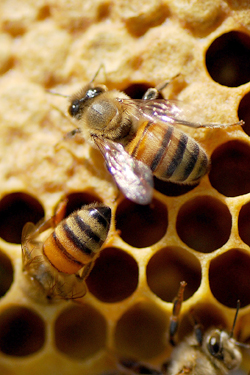 “No one pathogen or parasite is responsible for the mass die-offs, and many factors seem to be involved,” said Nancy Moran, senior author of the paper and the William H. Fleming, M.D. ’57 Professor of Ecology and Evolutionary Biology at Yale and the Microbial Diversity Institute at West Campus. “But it is interesting that major problems with these colonies began at the same time as the introduction of a new antibiotic in 2006.”

Honey bee pollination is crucial to agriculture, worth an estimated $15 billion in the United States alone. Tetracycline has been used for decades to ward off a potential colony-destroying infection called American foulbrood. The Yale study published in the Oct. 30 issue of the journal mBio shows eight beneficial gut bacteria common in honeybees and bumblebees have acquired genes that make them resistant to tetracycline. These genes are not found in colonies in countries where antibiotic use is not allowed. Moreover, one of the resistance genes has been found in American foulbrood, an evolutionary event that led beekeepers to adopt a new antibiotic Tylosin around 2006 — about the time colony collapse disorder was first detected.

Moran speculated the new drug may have disrupted beneficial gut bacteria in bees, contributing to the health problems of the bee colonies.

She also noted that antibiotic resistance genes are able to jump between unrelated bacterial species and that the genes found in the gut of honey bees were identical to those found in bacterial pathogens in humans and isolated from livestock.