COLUMBUS, Ohio – More than 80 percent of pigs that tested positive for influenza A virus at Ohio county fairs between 2009 and 2011 showed no signs of illness, according to a new study.

Ohio State University researchers tested 20 pigs each at 53 fair events over those three summers and found at least one flu-positive pig at 12 fairs – almost a quarter of fairs tested.

The influenza strains identified in pigs in this study include H1N2 and H3N2 viruses – strains that have been circulating in pigs since 1998. In 2011, all of the H3N2 and H1N2 isolates found in pigs at the fairs contained a gene from the 2009 pandemic strain of H1N1, which is similar to the H3N2v strain causing human illness this year. 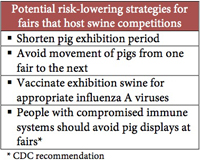 Though this finding alone is no cause for panic, it does show how quickly influenza viruses can change, said Andrew Bowman, lead author of the study and a Ph.D. candidate in veterinary preventive medicine at Ohio State.

In a second study led by Bowman, researchers compared the genomic sequences of influenza A viruses recovered in July 2012 from pigs and people. The analysis, showing a greater than 99 percent genetic similarity among the viruses, confirms that pigs and humans were infected with the same virus, indicating interspecies transmission.

As of Sept. 25 this year, the Centers for Disease Control and Prevention (CDC) had confirmed 107 human cases of H3N2v influenza in Ohio since July 2012, with the majority linked to exposure to pigs at agricultural fairs. While most of the human illness caused by H3N2v has been mild, one person, who had a compromised immune system, has died.

The more often that flu viruses are transmitted, the better their chances are of evolving into a strain to which humans are not immune, which is the big-picture concern among scientists monitoring these viral infections.

“Pigs can be infected with human-, avian- and swine-origin influenza viruses, making it possible for these viruses to easily swap their genetic material, which could allow for a new strain to emerge,” Bowman said. “The potential is there for newly emerged strains to be the next pandemic we never saw coming.”

Bowman and colleagues will continue to investigate strategies to protect swine and public health. In the meantime, the research group has offered potential risk mitigation strategies for fairs with swine competitions to consider: shortening the pig exhibition period, avoiding movement of pigs from one fair to the next, and vaccinating exhibition swine for appropriate influenza A viruses. In addition, the CDC recommends that people with compromised immune systems avoid pig displays at fairs.

Both studies appear online and are scheduled for later print publication. The three-year surveillance at Ohio fairs is published in the journal Emerging Infectious Diseases, and the analysis of human and pig viruses appears in Emerging Microbes & Infections.

Each summer, agricultural fairs bring together animal and human populations that normally don’t spend much time in the same place. Pigs are susceptible to multiple strains of influenza A viruses, and the three-year surveillance suggests that the daily visual inspection of pigs at fairs isn’t effective at identifying pigs infected with influenza A viruses. This combination of facts adds up to an environment conducive for the transmission of influenza A viruses among pigs and between humans and pigs, potentially in both directions.

“The prevalence of flu in market-weight pigs in commercial swine-production settings is pretty low. But finding flu at the fair shouldn’t be that surprising. If you bring 200-plus pigs together from multiple locations and house them with new neighbors for a week in a new environment, they are all bound to share pathogens,” Bowman said. “But we were surprised to find as much flu as we did subclinically, when pigs weren’t showing any signs of illness.”

Bowman and his colleagues, members of the College of Veterinary Medicine’s Animal Influenza Ecology and Epidemiology Research Program, tested pigs at 15 Ohio county fairs in 2009, 16 in 2010 and 22 in 2011, using nasal swabs to collect their samples.

The scientists found influenza A virus in at least one pig at 12 (22.6 percent) of the 53 fairs. At the fairs where flu was detected in the pigs, the average frequency of virus detection was 63 percent. Pigs showing signs of illness were observed and tested positive for flu at two fairs, and pigs without signs of illness but positive for flu were found at 10 (18.9 percent) of the 53 fairs. That means pigs at 10 of 12 fairs with positive flu cases, or 83.3 percent of flu-positive pigs, actually didn’t appear to be sick. A total of 1,073 pigs were tested over the three-year period.

“This is an explanation of why people were becoming infected in 2012 – because a high percentage of infected pigs with no clinical symptoms are exhibited at fairs,” said Richard Slemons, professor of veterinary preventive medicine at Ohio State and senior author of both studies. “There is potentially high exposure. Therefore, this is something we hadn’t seen before or did not know was going on because no one had systematically examined fairs.”

Influenza A virus usually infects the respiratory tract, and pigs can “shed” the virus into the air. Slemons described flu-positive swine areas as potentially under a “cloud” of flu particles that would be difficult to avoid. Swine infected with flu typically show clinical signs similar to those in humans: nasal discharge, cough, fever, lethargy and poor appetite.

In the second study, the researchers used swine-origin virus isolates collected during fair surveillance that had continued into the summer of 2012, and obtained the genetic sequences of human-origin influenza A virus isolates from GenBank, the National Institutes of Health genetic sequence database. The human viruses had been recovered from people with flu-like illness following exposure to pigs at an Ohio fair in July 2012.

The timing of the illnesses and the proximity of humans and pigs suggested the viruses were the same, but it was the higher than 99 percent similarity in the viruses’ genetic sequences that confirmed interspecies transmission, Bowman said.

“This study presents clear molecular evidence that pigs and humans were concurrently infected with the same strain of influenza A virus at an Ohio county fair in July 2012,” he said.

Bowman noted that the results of the two studies create new questions: How do these viruses get to the fair, what can be done to lessen the risk to animals and people, and are the infections going in only one direction, from pigs to humans?

The research program members are continuing to monitor the antigenic and genomic properties of type A influenza viruses in swine.

“It is possible that humans are infecting the pigs. The lineage of the H3N2 strains we see in pigs can be tracked back to the human seasonal flu of the 1990s,” Bowman said. “Human-to-swine transmission of influenza viruses has the potential to significantly impact swine health.”

He noted that influenza A virus is not considered a food-safety risk as long as pork is cooked properly.

Jacqueline Nolting and Sarah Nelson of Ohio State’s Department of Veterinary Preventive Medicine were co-authors on both papers. Additional co-authors of the Emerging Microbes & Infections paper include Srinand Sreevatsan and Carol Cardona of the University of Minnesota, Mary Killian of the USDA and Shannon Page of the Ohio Department of Health.