Behind the Surface: 19th-Century Haitian Paintings Provide Link to Past

Behind the surface of a painting lies the history of its making. Scholars now know more about the histories of some 19th-century Haitian paintings held in Yale’s collections, thanks to the collaborative efforts of colleagues from Yale, the Smithsonian Institution, and Haiti.

The participants in the project originally came together out of concern for the future of the paintings, many of which are in need of restoration and conservation efforts. Now that preliminary studies of the paintings are complete, planning is underway for the next phase: preserving these portraits for future audiences and researchers.

In 2011, Mark Aronson, chief conservator at the Yale Center for British Art (YCBA), traveled to Haiti as part of a team of volunteers who wanted to help repair artwork that had been damaged in the 2010 earthquake. (Read YaleNews coverage of his trip.)

Before Aronson left for Haiti, Ian McClure, chief conservator at the Yale University Art Gallery, asked him if he knew about some Haitian paintings at the Peabody Museum of Natural History. Aronson wasn’t aware of them, but when he got back from Port-au-Prince, he went to Yale’s West Campus, where the paintings were stored, to look at some of them.

The 15 paintings, which are held in the collection of the anthropology department at the Peabody, are attributed to Haitian artist Louis Rigaud. The portraits date from the 1870s and depict Haitian presidents and leaders, including François-Dominique Toussaint Louverture, the leader of the Haitian Revolution and the first president of Haiti. 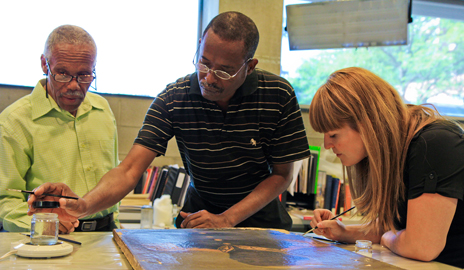 “We have one of the largest and most comprehensive Caribbean collections anywhere in the world,” says Roger Colten, senior collections manager at the Peabody. Most of the items, totaling more than 100,000 in number, are not paintings, but are archeological in nature. “One of the ways we learn about the collections is when scholars come in and take a look. It’s nice that other institutions here at Yale have taken an interest and have run with it,” says Colten. 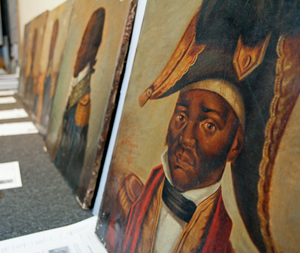 “It was an amazing set of coincidences that the paintings are here at all — that Ian was walking down the hall at West Campus and saw them, and because I was going down to Port-au-Prince, Ian said ‘Go look at these paintings.’ So all the stars aligned and here they are,” says Aronson, gesturing to the set of paintings now set up in the YCBA conversancy studio.

Seeing the paintings, and their condition, gave Aronson an idea: “Having worked in Port-au-Prince with conservation trainees I was particularly interested in whether there was a way to continue that training in New Haven to give colleagues in Haiti exposure to what modern conservation studios are like, new techniques, and also experience working with objects of their own cultural patrimony.”

Richard Kurin, undersecretary for history, art, and culture at the Smithsonian Institution and founder of the Haiti Cultural Recovery Project, contacted Aronson to ask if the YCBA could host two interns for one month to study the paintings. So, in August and September 2012, Smithsonian conservation trainees Franck Louissaint and Jean Menard Dernoncourt, both professors of fine art at the École Nationale des Artes in Port-au-Prince, spent four weeks working with the paintings in the YCBA’s conservation studio.

They analyzed and documented the 15 works, studied how they were made, and considered treatment options. They also visited conservation labs and collections on campus and gave talks on their conservation experiences, as well as their own art-making processes.

For the pair of Haitian artists, the story behind these paintings begins well before paints were mixed or brushes prepared. It starts with the birth of their nation. During a talk at the YCBA in September, Dernoncourt spoke passionately about the history of the men depicted in the portraits. “Jean Menard can talk about these generals and military history for days and days,” said Louissaint.

Dernoncourt says that he hasn’t painted any work of his own since the earthquake. For now, he is concentrating on rescuing and restoring works of art that speak about Haiti’s history.

While the paintings were at one time deemed to have no artistic value, they are now seen as an important link to the past. “The archive on images for African diaspora art is historically very thin. When it comes to Haiti, it’s even thinner,” says Yale art historian Erica James. “It’s not that it doesn’t exist, or that there isn’t a rich history of Haitian art. There is.”

The problem, says James, is that there are not many remaining art objects to study. “That’s partly because earthquakes aren’t new in Haiti. There was cyclical destruction, both politically and by nature, so a lot of the work has been destroyed,” says James. “These paintings allow us to frame a period again. It allows us to look at this period in a new way and expand an archive that we believed, in a sense, had been destroyed. In that sense, these paintings have proven invaluable.”

Yale conservator Jessica David, who studied the paintings alongside Dernoncourt and Louissaint, says the work has been very productive: “We’ve been doing tests on the paintings to see how they respond to moisture, to see if we can get tears back into alignment, and how much time this would take in phase two: to see to the full conservation and restoration of the 15 paintings. We’ve had positive and encouraging results so far.”

One surprising revelation for the team was the discovery that at least some of these paintings seem to have possibly begun as images that were transferred to the canvas photo-mechanically and then covered with paint.

David is currently busy restoring the portrait of François-Dominique Toussaint Louverture so that it can be displayed at the Yale University Art Gallery as part of an installation overseen by curator Patricia Kane.

It is hoped that the work done with this collection so far will lead to a longer treatment phase involving one or more conservators from Haiti, possibly working at Yale’s West Campus. A third phase would involve finding exhibition, publication, and teaching opportunities.

“The idea that a project like this would grow organically from the collections and through conversations with colleagues around campus is very promising for its success,” says Pam Franks, deputy director of collections and education at the Yale University Art Gallery.