Biofuels from Algae Hold Potential, but Not Ready for Prime Time

Scaling up the production of biofuels made from algae to meet at least 5 percent – about 10 billion gallons – of U.S. transportation fuel needs would place unsustainable demands on energy, water and nutrients, says a new report from the National Research Council, or NRC. However, these concerns are not a definitive barrier for future production, and innovations that would require research and development could help realize algal biofuels’ full potential.

“Algal biofuels are not quite ready for prime time,” said NRC committee member Joel Cuello, a professor in the UA department of agricultural and biosystems engineering who co-authored the report. “In other words, if scaled up today, the resources that have to go into production would not be sustainable. However, in our report we say that this not a show stopper, because there are technology combinations that can be designed and developed to make the production process more environmentally sustainable.” 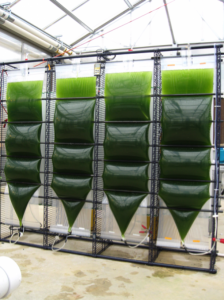 For algal biofuels to contribute a significant amount of fuel for transportation in the future, the committee said, research and development would be needed to improve algal strains, test additional strains for desired characteristics, advance the materials and methods for growing and processing algae into fuels, and reduce the energy requirements for multiple stages of production.

Biofuels derived from algae and cyanobacteria are possible alternatives to petroleum-based fuels and could help the U.S. meet its energy security needs and reduce greenhouse gas emissions such as carbon dioxide. Algal biofuels offer potential advantages over biofuels made from land plants, including algae’s ability to grow on non-croplands in cultivation ponds of freshwater, salt water or wastewater.

The number of companies developing algal biofuels has been increasing, and several oil companies are investing in them. Given these and other interests, the National Research Council was asked to identify sustainability issues associated with large-scale development of algal biofuels.

Cuello said if current methods were to be scaled up to meet the 5-percent goal, algal biofuel production would consume too much water, energy and nutrients to be environmentally sustainable at this point. Additional concerns voiced in the report are the amount of land area needed for algae ponds and uncertainties in greenhouse gas emissions over the production life cycle.

“Resource consumption is very dependent on which technology components you combine and how you combine them to constitute a biofuel production pathway that is both environmentally sustainable and economically viable,” he explained.

Most of the current development involves growing selected strains of algae in open ponds or closed photobioreactors using various water sources, collecting and extracting the oil from algae or collecting fuel precursors secreted by algae, and then processing the oil into fuel. 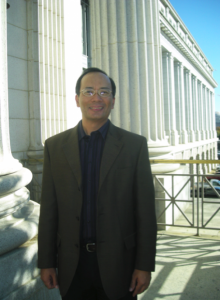 “Our report brings awareness to address the concerns of making production not only commercially viable but environmentally sustainable,” he said. “In my opinion, you can’t divorce the two. As a matter of fact, most efforts aiming at lowering the production costs is to make the process more sustainable in terms of energy, water and nutrient use.”

Several researchers at the UA are exploring innovative ways to extract biofuel from algae more effectively and, ultimately, sustainably.

For example, researchers in Cuello’s lab have developed the Accordion photobioreactor to provide a controlled environment for growing algae.

Kimberly Ogden of the department of chemical and environmental engineering studies algae to better understand the chemical structure of the oils, with the goal of being able to process them into biodiesel with the same facilities currently used to process petroleum.

Another approach, followed by Judith Brown in the UA department of plant sciences, seeks to coax algae into producing more oil.

“The most effective way of addressing the challenges our report identified would be in an integrative approach addressing all the factors together – water, nutrients, energy, land use and greenhouse-gas emissions,” Cuello said.

“There is the biological component – the algae, and the engineering aspect – cultivating, harvesting and processing “ he added, “and there has to be a conversation between the two. For example, you could have high-yielding algae that excrete the oil or its precursor, which would eliminate the need for harvesting the algae biomass in the first place.”

Similarly, by using wastewater from agricultural or municipal sources to grow and feed the algae, one could address both the water and the nutrient issue, and lower the energy demands in the process as well.

Cuello pointed out that the report should not come as a surprise to experts. “All of the federally funded research projects on algal biofuels are, at least indirectly, already working to address these concerns that we identified and explicitly stated because people have been aware of these challenges – though perhaps not with the degree of process integration that is required.”

The report was sponsored by the U.S. Department of Energy to aid the agency in its decision-making process regarding sustainable algal biofuel development. The National Academy of Sciences, National Academy of Engineering, Institute of Medicine and National Research Council make up the National Academies. They are private and independent nonprofit institutions that provide science, technology and health policy advice under an 1863 congressional charter.

Panel members, who serve as volunteers, are chosen by the academies for each study based on their expertise and experience and must satisfy the academies’ conflict-of-interest standards. The resulting consensus reports undergo external peer review before completion.