ANN ARBOR, Mich.— When tropical marine cone snails sink their harpoon-like teeth into their prey, they inject paralyzing venoms made from a potent mix of more than 100 different neurotoxins.

Biologists have known for more than a decade that the genes which provide the recipes for cone snail toxins are among the fastest-evolving genes in the animal kingdom, enabling these predatory gastropods to constantly refine their venoms to more precisely target the neuromuscular systems of their prey.

But scientists had been unable to explain the molecular mechanisms behind the impressive diversity and the speedy evolution of cone-snail toxins, which are known as conotoxins.

Now, two University of Michigan evolutionary biologists report that their reconstruction of the evolutionary history of these genes has revealed rapid and continuous gene duplication over the last 11 million years that is coupled with the accelerated rates of conotoxin evolution.

“The high rates of gene duplication may actually facilitate the rapid evolution of gene-family members by increasing the number of opportunities for beneficial mutations to occur through increases in the gene copy number,” said Chang, a doctoral student in the Department of Ecology and Evolutionary Biology. 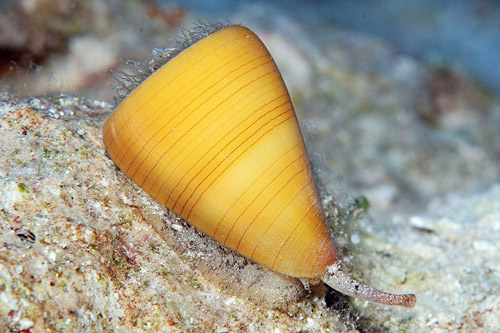 When tropical marine cone snails sink their harpoon-like teeth into their prey, they inject paralyzing venoms made from a potent mix of more than 100 different neurotoxins. Shown here is the oak cone, Conus quercinus, one of the species examined in the U-M study. Image credit: Jeanette Johnson

The final version of a paper about the U-M conotoxin study was published online Thursday in the journal Molecular Biology and Evolution.

Cone snails make up the genus Conus, which contains more than 600 species of predatory sea snails, most of them tropical in distribution. The study by Chang and Duda looked at conotoxin gene sequences from the genomic DNA of four closely related Conus species. Originally collected in Hawaii, Panama and American Samoa, the specimens were stored in the collections of the U-M Museum of Zoology.

The study by Chang and Duda is the first to examine conotoxin genes from several closely related species to reconstruct the evolution of conotoxin gene families. Within a species, genes that are extremely similar in structure and function are considered to be part of the same gene family. Genes that make up families are hypothesized to have arisen from a common ancestral sequence through gene duplication, which adds an extra copy of a gene to the organism’s genome.

Over evolutionary time, the extra copy of the gene can accumulate random mutations. Beneficial mutations—ones that result in a valuable new function—can be retained through natural selection, resulting in a new gene and the creation of a gene family.

As the process is repeated again and again, additional genes are added to the family. Today, the typical cone-snail species has 100 to 200 unique neurotoxins in its venom, and the gene-duplication process likely contributed to this diversity, said Chang and Duda.

“Our main result, as I see it, is that this rapid gene turnover is something that can drive rapid evolution,” said Duda, an associate professor of ecology and evolutionary biology and associate curator of the U-M Museum of Zoology. “We’re equating redundancy—having multiple copies of the same gene present in the genome—to rapid change.”

The origin of novel gene function through gene duplication, mutation and natural selection represents one of the mechanisms by which organisms diversify and one of the possible paths leading to adaption. However, the extent, role and consequences of gene duplications in the origins of ecological adaptations, especially in the context of species interactions, have been less clear.

In their Conus study, Chang and Duda analyzed the “A-superfamily” of conotoxin genes and found that it displays extremely high rates of gene duplication that are correlated with accelerated rates of evolution.

Rapid evolution allowed Conus to diversify and fine tune its toxins, changes that may have been compelled by dietary shifts among the snails or the development of toxin resistance in prey species. Cone snails feed on marine worms, fish and other snails.

The work was supported by funds from the U-M Rackham Graduate School and a Rackham/Department of Ecology and Evolutionary Biology block grant awarded to Chang. The work was also supported by a National Science Foundation award to Duda