UCLA researchers have pinpointed a new mechanism that potently activates T cells, the group of white blood cells that plays a major role in fighting infections.

The team specifically studied how dendritic cells, immune cells located at the site of an infection, become more specialized to fight the leprosy pathogen known as Mycobacterium leprae. Dendritic cells, like scouts in the field of a military operation, deliver key information about an invading pathogen that helps activate the T cells in launching a more effective attack.

The research appears online March 25 in the journal Nature Medicine.

It was previously known that dendritic cells were important for a strong immune response and that the number of dendritic cells at an infection site positively correlated with a robust reaction. However, until now it was poorly understood how dendritic cells become more specialized to address specific types of infections.

“This is the first time that this potent infection-fighting pathway with dendritic cells has been identified and demonstrated to be important in fighting human disease,” said the study’s first author, Mirjam Schenk, a postdoctoral scholar in the division of dermatology at the David Geffen School of Medicine at UCLA. 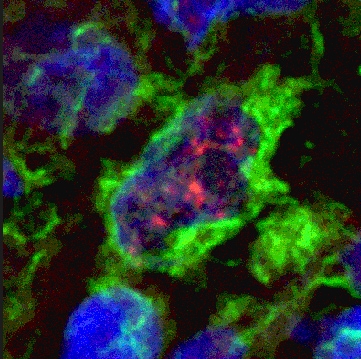 In conducting the study, the scientists used monocytes taken from the blood of both healthy donors and leprosy patients and incubated the cells with the pathogen M. Leprae or specific parts of the mycobacteria known to trigger NOD2 and TLR2, both of which are associated with immune system activation.

The researchers wanted to investigate how these proteins might trigger mechanisms that “turn on” different immune receptors that recognize specific parts of the microbe in an infection. The NOD2 interleukin-32 pathway was the most effective and caused the monocytes to develop into dendritic cells that carry critical information about the pathogen to the T cells.

The team studied the gene-expression profiles of the protein-triggered pathways and also examined how the monocytes of leprosy patients responded to NOD2. They found that NOD2 worked to induce moncytes to become dendritic cells in tuberloid leprosy, a milder infection that is more easily contained. The NOD2 pathway was inhibited and could not be activated in lepromatous leprosy, which is more serious and causes widespread infection throughout the body.

“We were surprised to find the high potency of the dendritic cells in triggering certain specific T cell responses, which may be useful in developing new therapeutic strategies for infectious diseases and cancer,” said senior investigator Dr. Robert Modlin, UCLA’s Klein Professor of Dermatology and chief of dermatology at the Geffen School of Medicine.

Leprosy, one of the world’s oldest known diseases, is a chronic infectious disease that affects the skin, the peripheral nerves, the upper respiratory tract and the eyes and can lead to disfigurement of the hands, face and feet. In 2008, approximately 249,000 new cases of leprosy were reported worldwide, according to the World Health Organization.

Modlin said leprosy is a good model for studying immune mechanisms in host defense since it presents as a clinical spectrum that correlates with the level and type of immune response of the pathogen.

In the next stage of research, the scientists will attempt to further understand how to manipulate the innate immune system to induce a potent immune response in human infections, and possibly for cancer immunotherapy as well.