*Anthropology Helps Us Understand the Past and Allows for a Deeper Understanding of the Future.*

COLUMBIA, Mo. — For more than a century and a half, scientists and tourists have visited massive animal-shaped mounds, such as Serpent Mound in Ohio, created by the indigenous people of North America. But few animal effigy mounds had been found in South America until University of Missouri anthropology professor emeritus Robert Benfer identified numerous earthen animals rising above the coastal plains of Peru, a region already renowned for the Nazca lines, the ruined city of Chan Chan, and other cultural treasures.

“The mounds will draw tourists, one day,” Benfer said. “Some of them are more than 4,000 years old. Compare that to the effigy mounds of North America, which date to between 400 and 1200 AD. The oldest Peruvian mounds were being built at the same time as the pyramids in Egypt.”

Benfer identified the mounds, which range from five meters (16.5 feet) to 400 meters (1,312 feet) long in each of the six valleys he surveyed in coastal Peru. The mounds pre-date ceramics and were probably built using woven baskets to carry and pile up rock and soil. 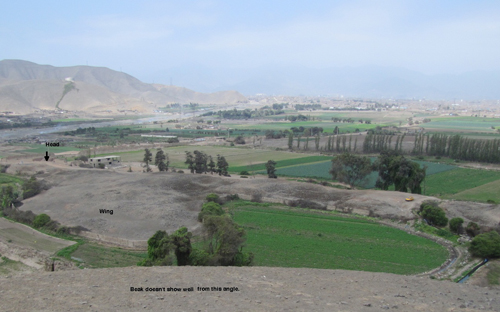 From the ground, the condor at El Paraíso is more difficult to identify. (Image credit: Robert Benfer)

Like the Nazca lines, which include a series of giant animal outlines drawn on the ground to the south, the animal mounds were best observed from a higher vantage point. Google Earth images of the mounds revealed the shapes of birds, including a giant condor, a 5,000 year-old orca, a duck, and a caiman/puma monster seen in bone and rock carvings from the area.

“The finding of animal effigy mounds where there were none before changes our conception of early Peruvian prehistory,” Benfer said. “That they probably represent the Andean zodiac is also a new find. A controversial interpretation of some Nazca figures as representations of the zodiac is supported by these mounds.”

Benfer suggested the structures may have been built as terrestrial manifestations of constellations the ancient Peruvians saw in the stars above. The mounds not only represented the stars, they aligned with them. So far, Benfer has found astronomical orientations at every giant mound.

For example, at the Chillón Valley site, an earthen condor’s charcoal eye lined up with the Milky Way when viewed from a nearby temple. The monstrous caiman/puma mound aligned with the June solstice when viewed from the same temple.

This wire mesh model is of the condor figure that parallels the monster at El Paraíso. A line from the temple through the condor eye can be extended 29 kilometers up the valley where it intersects another condor image. (Image credit: Nathan Craig, Pennsylvania State University)

According to Benfer, astronomer priests may have made directed construction of the mounds and then made observations of the sky and offerings to the Earth from atop the earthen creatures. For the ancients, having a celestial calendar allowed farmers and fisherman to prepare for the year ahead.

“For example, knowing that December 21 had passed was very important. If there was no sign of an El Niño by then, fishers would know they would have another good year, and farmers would face neither drought nor floods,” Benfer said.

Previously, the only other effigy mounds known from South America were a few sites in the Andes, but Benfer’s discoveries may be just the beginning.

“In each field season, I have found more giant mounds and more fields of smaller ones. I will go back in June and July confident of identifying more on the ground,” Benfer said. 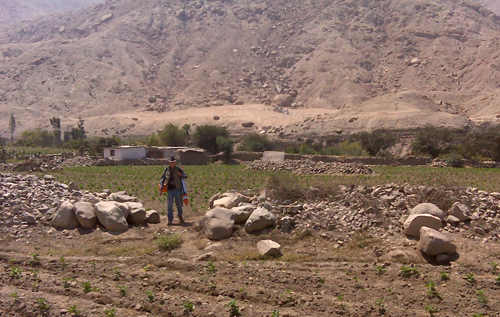 MU anthropologist Robert Benfer stands near some of the smaller mounds. The mound in the distance is a small bird-like figure. (Image credit: Robert Benfer)

Although they appear to be plentiful, researchers overlooked the animal effigies since the first days of scientific archeology in Peru.

“I had always noted that a very large structure just north of Lima resembled a bird. But since there were supposedly no giant animal effigy mounds in South America, I thought it couldn’t be one,” Benfer said.

Then, two years ago, while studying satellite views of archeological sites, Benfer noticed what looked like teeth on one of the mounds north of Lima. The jagged teeth-like structures had been misidentified as irrigation canals. But after a ground survey of the area, he realized he was standing atop the caiman/puma monster of Chillón Valley. He soon found the nearby condor mound and went on to identify numerous other earthen animal effigies.

The results of Benfer’s work were published in the journal Antiquity. The Curtiss and Mary G. Brennan Foundation supported his work as did the research board of the University of Missouri. The Museum of Anthropology and Pre-Columbian Agriculture of the National Agricultural University of Peru provided laboratory and technical support. The field team of Bernardino Ojeda, Omar Ventocilla, Andrés Ocas, and Lucio Laura produced maps and valuable observations.

Although retired, Benfer continues field research in Peru and Mexico. His work today focuses on the intersection of astronomy and archeology, particularly alignments between celestial events and religious structures. He has been invited to submit a major review of his work and will do so this spring.