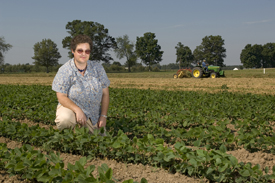 EAST LANSING, Mich. — Crop diversification with shrubby legumes mixed with soybean and peanuts could be the key to sustaining the green revolution in Africa, according to a Michigan State University study.

The study, which appears in the Nov. 22 issue of the Proceedings of the National Academy of Sciences, states that diversifying crops would boost production of nutrient-enriched grain by 12 percent to 23 percent, said Sieglinde Snapp, a crop and soil scientist at Michigan State University’s Kellogg Biological Station who led the study.

Malawi has been called the cradle of Africa’s green revolution. Through its government subsidizing 90 percent of fertilizer and superior corn seed costs, Malawi has reaped substantial gains in productivity of calorie-rich food. The successful program has had some unintended consequences, though, such as reliance on starchy cereals, expensive fertilizer and depleted soils.

Rotating corn with pigeonpea mixtures (a shrubby legume grown in tropical regions) keeps the soil from being stripped of nutrients while increasing nutrient-rich grain productivity. This sustained boost would enhance food and environmental security in Africa, Snapp said.

“This diversified rotation provides multiple benefits compared to simply planting a continuous corn crop,” she said. “One big plus is that it will allow twice as much sunlight capture and nitrogen fixation, which supplements fertilizer and improves the efficiency of any fertilizer that is applied. This translates to more stable grain production and enhanced nutritional grain.”

The nation furthered its green reputation by committing at every level to make this unprecedented long-term and wide-ranging study possible. It was carried out over multiple years and involved thousands of extension educators, farmers, government officials, hospital staff, university educators and farmer research groups, according to Snapp.

“This participatory research approach has led to an agricultural revolution, one that will provide multiple benefits other than increased productivity,” she said. “For example, as dependency on fertilizer and subsidies decrease, the government can use the money to invest in education, health and civil society.”

Snapp’s research is funded in part by the Michigan Agriculture Experimental Station. To read more about MSU’s collaborations in Africa, visit https://special.news.msu.edu/africa/.