ANN ARBOR, Mich.— In an effort to understand how fast sea level could rise as the climate warms, a University of Michigan researcher has developed a new theory to describe how icebergs detach from ice sheets and glaciers.

This process of “iceberg calving” isn’t well understood. While scientists believe it currently accounts for roughly half of the mass lost in shrinking ice sheets, current sea level rise models don’t take changes in iceberg calving into account in their predictions, says Jeremy Bassis, an assistant professor in the Department of Atmospheric, Oceanic and Space Sciences.

Bassis is the author of a paper on the new theory published online today in the Journal of Glaciology. It will appear in print in the January edition.

“Our models cannot predict about half of the mass balance. We don’t know how much of an effect this will have, but we’ve seen several prominent examples where calving is connected with speed-up of the ice-retreat process,” Bassis said.

The Larsen B ice shelf in Antarctica—a 2,000-square-mile, 700-foot-thick slab that had been stable for thousands of years—disintegrated in about six weeks between January and March of 2002. Scientists believe rising temperatures and ice fracturing primarily caused the disintegration. But they don’t have a handle on exactly how it happened. 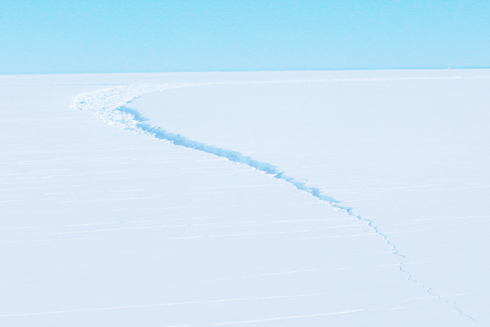 A helicopter view of a crack in the Amery Ice Shelf in East Antarctica that has been propagating at about 3 meters per day for close to two decades. Eventually, this crack system is expected to yield an iceberg. Image credit: Jim Behrens

When ice breaks off of ice shelves, it doesn’t directly or immediately cause melting and sea level rise. But scientists believe it can contribute to and hasten those processes. The icebergs can float into warmer parts of the ocean and melt. And ice calving can perhaps lead to more fracturing.

“What we’ve been lacking is a way to quantify whether calving will increase or decrease in the future, and do it in a way that doesn’t involve information from a particular glacier. There are thousands and thousands of glaciers that might break up because of climate change. We’d like to have a theory that explains how this happens for any regime and this is a step in that direction,” Bassis said.

Bassis’ theory is a statistical methodology that allows him to predict the average iceberg calving rate and how much that can be expected to fluctuate for a given region based on the amount of stress within the ice and its thickness. He was able to construct a more general model than current ones, he says, because he assumed that cracking happens somewhat randomly. He didn’t try to predict where every fracture would occur.

“You don’t need to understand what every glacier is doing if you know what glaciers are doing on the whole,” Bassis said.

Current predictions of sea level rise range from about four inches to 2.5 feet by 2100. This is a wide range that Bassis’ theory could help to narrow.

“From a societal perspective, a significant portion of the Earth’s population lives very close to sea level. We’d like to be able to better predict how much sea level will rise so we can build defenses or, if necessary, plan for migrations,” Bassis said.

The paper is called “The statistical physics of iceberg calving and the emergence of universal calving laws.” Bassis is also an assistant professor in Department of Geological Sciences. This research is funded by NASA.