EAST LANSING, Mich. — Historically, the media have been particularly harsh to sharks, and it’s affecting their survival.

The results of a Michigan State University study, appearing in the current issue of the journal Conservation Biology, reviewed worldwide media coverage of sharks – and the majority isn’t good.

Australian and U.S. news articles were more likely to focus on negative reports featuring sharks and shark attacks rather than conservation efforts. Allowing such articles to dominate the overall news coverage diverts attention from key issues, such as shark populations are declining worldwide and many species are facing extinction, said Meredith Gore, MSU assistant professor of fisheries and wildlife and the School of Criminal Justice. 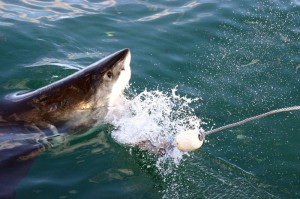 Sharks could benefit from an image campaign. Photo courtesy of Bret Muter.

“The most important aspect of this research is that risks from ­– rather than to – sharks continue to dominate news coverage in large international media markets,” said Gore, part of the research team led by Bret Muter, formerly at MSU and now with the Udall Foundation. “To the extent that media reflect social opinion, this is problematic for shark conservation.”

According to the study, more than 52 percent of global coverage focused on shark attacks on people, and sharks were portrayed negatively in nearly 60 percent of the coverage. That’s compared to a mere 10 percent featuring shark conservation issues and just 7 percent focusing on shark biology or ecology.

Another interesting fact from the study is who is quoted in the stories. Conservation groups were typically quoted or cited highlighting negative effects on sharks. They weren’t, however, part of stories about shark conservation.

“This suggests that conservation groups are either not being sought out by the media in regards to shark conservation issues or they are not engaging enough to make headlines,” Gore said.

The issues affecting sharks’ survival are many. They include the threat of overfishing (overharvesting sharks for their fins), pollution, habitat loss and climate change. Sharks are especially vulnerable to these threats due to sharks’ slow-growth rates, late age of maturity, long gestation periods and low reproductive output.

One way to improve sharks’ image would be to balance the coverage. Examples of positive articles include highlighting the rarity of attacks, discussing preventive measures water users can take to reduce vulnerability to attacks, and discuss conservation issues related to local and threatened species of sharks, Gore said.