University of Delaware researchers are using an underwater robot to find and follow sand tiger sharks that they previously tagged with transmitters. The innovative project is part of a multi-year partnership with Delaware State University to better understand the behavior and migration patterns of the sharks in real time.

“In the past week our new, specially equipped glider OTIS – which stands for Oceanographic Telemetry Identification Sensor – detected multiple sand tiger sharks off the coast of Maryland that were tagged over the past several years,” said Matthew Oliver, assistant professor of oceanography in UD’s College of Earth, Ocean, and Environment. “This is the first time that a glider has found tagged sharks and reported their location in real time.” 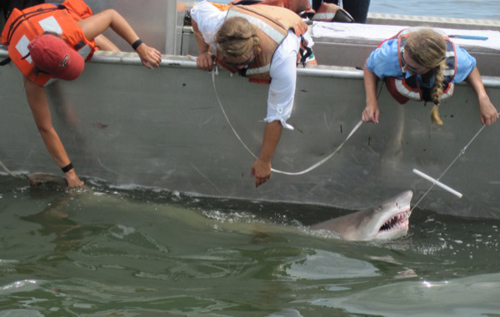 Delaware researchers are tagging sand tigers to learn about the sharks’ migrations. Photo by Matthew Breece

OTIS is a remote-controlled device that looks like a yellow torpedo and normally darts through the ocean to sample water conditions. Oliver outfitted the apparatus with acoustic receivers that can recognize signals given off by the sharks’ transmitters as they travel through coastal waters, rapidly reporting the encounters.

The technology allows the course of OTIS to be changed to follow the sharks and test the water surrounding them. Sharks were initially found on Oct. 10, and OTIS doubled back to again locate the sharks. The approach will help scientists follow where the sharks are going more quickly than conventional tracking techniques. 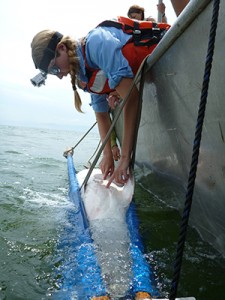 Sand tigers are the largest commonly occurring shark in Delaware’s bay and coastal waters, serving as Delaware Bay’s apex predator and playing a key role in the ecological balance of the region.

“Sand tigers have suffered from a number of threats that ultimately led to population declines,” said Delaware State’s Dewayne Fox. “In 1997 sand tigers were listed as a ‘species of concern’ by the National Marine Fisheries Service, although very little is known of their migrations and habitat requirements.”

The research involves three different types of tags. One is an acoustic transmitter that “pings” receivers while passing by a set of 70 devices situated mostly in Delaware Bay, with a few along the Atlantic coast. The receivers are maintained by Fox, who has tagged more than 500 sharks since 2006.

The team is also using 34 pop-off satellite archival tags, which store data on the sharks’ journeys for one year and then automatically release from the animal to dispatch a location signal for retrieval from the water.

The newest type of tag is called a VEMCO mobile transceiver (VMT), a larger tag that both transmits and receives information to communicate its location and listen for the pings of other sharks, fish or marine mammals outfitted with acoustic tags.

“It will tell us not only where it is, but who it’s with,” Oliver said. “It’s like a social network for sharks.”

Together with their students, Oliver and Fox spent the summer inserting the transmitters into sand tiger sharks in Delaware Bay. Using bait, hooks and little patience, they caught the sharks – up to nine feet long — and carefully pulled them into a stretcher alongside their boat. 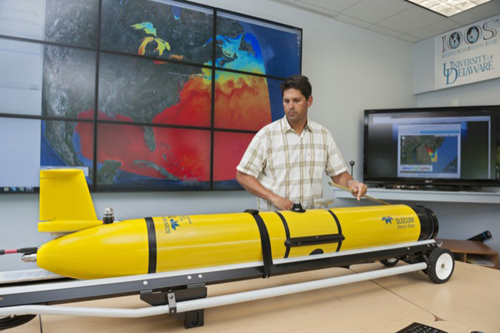 Matthew Oliver, assistant professor of oceanography, is using an underwater robot to help track sharks along the Delmarva Peninsula. Photo by Evan Krape

Veterinarians from the Georgia Aquarium trained Oliver’s graduate student, Danielle Haulsee, to insert the small transmitters in a quick surgery.

Scientists suspect that the sharks migrate widely along the Eastern Seaboard, and the Delaware research team plans to use newly collected information to map sand tiger shark habitats. They will cross-reference the sharks’ data with satellite and remotely sensed environmental conditions to create a comprehensive picture of the animals’ habitats.

“The integration of biotelemetry with ocean observations represents a fusion between observing networks on the East Coast,” Oliver said.

Fox is part of the Atlantic Cooperative Telemetry Network (ACT), which tracks thousands of animals as they move up and down the coast, while Oliver participates in the Mid-Atlantic Regional Association Coastal Ocean Observing System (MARACOOS), which uses satellites, underwater robots and models to study the coastal ocean. Their hope is that the combination of various data sets will assist natural resource managers in predicting where sand tiger sharks live – and when – for conservation and recovery efforts.

Using OTIS will help researchers know which water conditions sharks prefer to swim in during their migrations. The glider can travel further out than the static receivers’ locations and also collect information on temperature, water clarity and oxygen levels. If the sharks head to a certain place, scientists may be able to better understand why, Oliver explained.

Last week his team took an educated guess on where to find the sharks, launching the glider off the coast of Delaware’s Indian River Inlet and heading south. After five days, they received transmissions from sharks about 4 to 9 miles off the coast of Assateague Island, Md. Next they will try to direct the glider to stay near the sharks, unless they move south of the lower Delmarva Peninsula. The machine can stay out on a mission for about four weeks before needing a battery recharge.

“We have at least another two weeks of battery,” Oliver said. “We’ll see how it develops.”