A relatively fast, easy and inexpensive technique for inducing nanorods – rod-shaped semiconductor nanocrystals – to self-assemble into one-, two- and even three-dimensional macroscopic structures has been developed by a team of researchers with the U.S. Department of Energy (DOE)’s Lawrence Berkeley National Laboratory (Berkeley Lab). This technique should enable more effective use of nanorods in solar cells, magnetic storage devices and sensors. It should also help boost the electrical and mechanical properties of nanorod-polymer composites.

Leading this project was Ting Xu, a polymer scientist who holds joint appointments with Berkeley Lab’s Materials Sciences Division and the University of California (UC) Berkeley’s Departments of Materials Sciences and Engineering, and Chemistry. Xu and her research group used block copolymers – long sequences or “blocks” of one type of monomer bound to blocks of another type of monomer – as a platform to guide the self-assembly of nanorods into complex structures and hierarchical patterns. Block copolymers have an innate ability to self-assemble into well-defined arrays of nano-sized structures over macroscopic distances.

“Ours is a simple and versatile technique for controlling the orientation of nanorods within block copolymers,” Xu says. “By varying the morphology of the block copolymers and the chemical nature of the nanorods, we can provide the controlled self-assembly in nanorods and nanorod-based nanocomposites that is critical for their use in the fabrication of optical and electronic devices.”

Xu is the corresponding author of a paper describing this research that has been published in the journal Nano Letters under the title “Direct Nanorod Assembly Using Block Copolymer-Based Supramolecules.” Co-authoring the paper were Kari Thorkelsson, Alexander Mastroianni and Peter Ercius.

Nanorods – particles of matter a thousand times smaller than the stuff of today’s microtechnologies – display highly coveted  optical, electronic and other properties not found in macroscopic materials. To fully realize their vast technological promise, however, nanorods must be able to assemble themselves into complex structures and hierarchical patterns, similar to what nature routinely accomplishes with proteins. 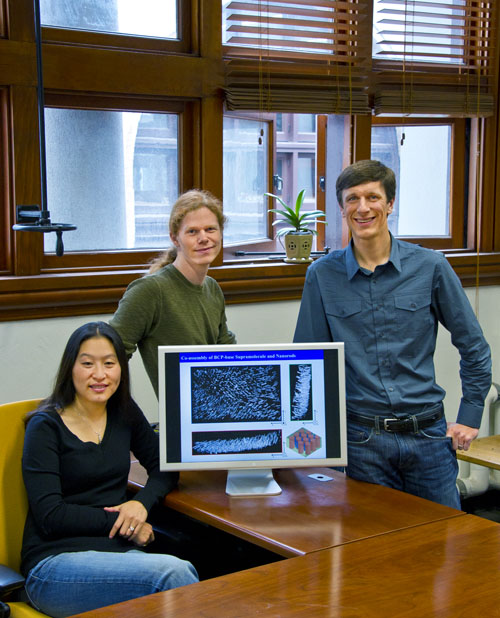 From left, Ting Xu, Kari Thorkelsson and Peter Ercius were part of a team that developed a relatively fast, easy and inexpensive technique for inducing nanorods to self-assemble into one-, two- and even three-dimensional macroscopic structures. (Photo by Roy Kaltschmidt, Berkeley Lab)

Xu and her research group first enlisted block copolymers as allies in this self-assembly effort in 2009, working with the spherical nanoparticles commonly known as quantum dots. In that study, they lashed quantum dots to block copolymers via a “mediator” of small adhesive molecules. In this latest development, Xu and her group again made use of adhesive molecules, but this time to mediate between the nanorods and supramolecules of block copolymers. A supramolecule is a group of molecules that act as a single molecule able to perform a specific set of functions.

Xu and her group incorporate nanorods into solutions of block copolymer supramolecules that form spherical, cylindrical and lamellar microdomains. During the drying process energy is contributed to the system from the interactions between nanorod ligands and polymers, the entropy associated with polymer chain deformation upon nanorod incorporation, and the interactions between individual nanorods. Xu and her group observed that these energetic contributions determine the placement and distribution of the nanorods, as well as the overall morphology of the nanorod-block copolymer composites. These energetic contributions can be easily tuned by varying the supramolecular morphology, which is accomplished simply by attaching different types of small molecules to the side chains of the block copolymers.

“We can readily access a wide library of nanorod assemblies including arrays of nanorods aligned parallel to block copolymer cylindrical microdomains, continuous nanorod networks, and nanorod clusters,” Xu says. “Since the macroscopic alignment of block copolymer microdomains can be obtained in bulk and in thin films by the application of external fields, our technique should open up a viable route to manipulate the macroscopic alignments of nanorods.”

This new technique can produce ordered arrays of nanorods that are macroscopically aligned with tunable distances between individual rods – a morphology that lends itself to the production of plasmonics, which are materials that hold great promise for superfast computers, ultra-powerful optical microscopes, and even the creation of invisibility carpets. It is also a straightforward nanoparticle self-assembly technique that can produce a continuous network of nanorods with nanoscopic separation distances. Such networks can enhance the macroscopic properties of nanocomposites, including electrical conductivity and material strength.

Xu credits much of the success of this research to the exceptional capabilities and staff at the National Center for Electron Microscopy (NCEM), a DOE national user facility at Berkeley Lab, which is home to the world’s most powerful electron microscopes.

“For the study of three-dimensional nanorod assemblies, we needed to implement high-resolution tomography and this posed a challenge not only for collecting the imaging data but also for processing it,” Xu says. “The expertise and skill of NCEM’s Peter Ercius was invaluable.”

Most of this work was done on NCEM’s 200kV monochromated UT Tecnai microscope, an instrument designed to produce optimum high resolution performance in both transmission and scanning transmission electron microscopy modes.

Xu and her group are now investigating the self-assembly of semiconductor nanocrystals that take the shapes of cubes or tetrapods, both of which have important potential applications for photovoltaic and other technologies.

“We’d also like to investigate the self-assembly of nanoparticles into combinations of different shapes,” Xu says.