Lecture or Listen: When Patients Waver on Meds

*According to a new analysis of hundreds of recorded office visits, doctors and nurse practitioners typically issued orders and asked closed or leading questions when talking to their HIV-positive patients about adherence to antiretroviral therapy. Attempts at problem-solving with patients who had lapsed occurred in less than a quarter of visits.*

PROVIDENCE, R.I. [Brown University] — Take your medicine, Doctor’s orders. It’s a simple idea that may seem especially obvious when the pills are the antiretroviral (ARV) drugs that add decades to the lives of HIV-positive patients. But despite the reality that keeping up with drug regimens is not easy for many patients, a new analysis of hundreds of recorded doctor’s office visits finds that physicians and nurse practitioners often still rely on lecturing, ordering, and scolding rather than listening and problem solving with their patients.

Providers asked about adherence to medication in nine out of 10 cases, but their questions were closed or leading, rather than open-ended 90 percent of the time, the researchers found in the study published online Feb. 1, 2012, in the journal AIDS and Behavior. Problem-solving discussions only occurred with 23 percent of the patients who reported lapsing on their medications. Even then, the discussions were decidedly one-way: Providers were much more likely to begin issuing commands then than during the rest of the visit.

“A lot of what happens is that the doctor asks whether a patient is taking pills, and the person says, ‘Well I miss once in a while.’ Then the doctor says, ‘You’ve got to take them,’ and that’s it,” said study lead author M. Barton Laws, an assistant professor (research) of health services policy and practice at Brown Unviersity. “With problem-solving talk, it turns out that it typically consists of the doctor saying, ‘Well, why don’t you do this or that?’” 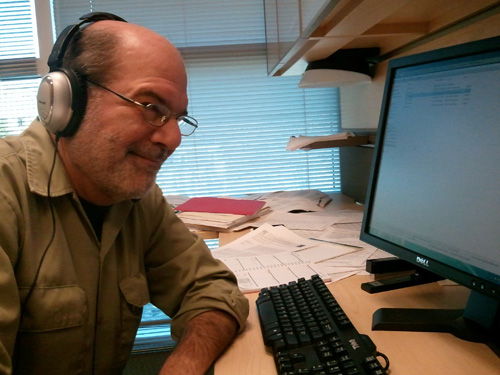 The challenges many HIV patients face in keeping up with medications include a lack of money, unstable housing, substance abuse, and other problems in their life, said Laws, who worked with Ira Wilson, professor and chair of the Department of Health Services Policy and Practice at Brown on the study.

In all, the researchers applied a rigorous coding method to characterize every utterance that occurred between a total of 415 patients and 45 doctors and nurse practitioners during office visits in Portland, Ore., Detroit, Baltimore, and New York City. Of the 311 patients on ARV medication, 143 acknowledged that they were at least somewhat out of compliance with their drug regimens.

Because the researchers coded entire visits and dug especially deeply into the adherence discussions, they were able to determine what proportion of the dialogue concerned medication adherence and how the tone of the conversation changed when it did.

“We were able to isolate that and do it rigorously,” Laws said.

Doctors and patients on ARV treatment devoted less than 6 percent of their utterances to adherence. In the minority of cases where problem-solving even came up, a quarter of what the doctors and nurse practitioners had to say was to issue directives. That compared to issuing directives only 5 to 10 percent of the time during other parts of the visit.

Laws said that although patient-centered doctoring and ideas such as “concordance” have been increasingly acknowledged in the profession, doctors and nurse practitioners still haven’t developed the skills to try different approaches to engaging patients in their own care, such as motivational interviewing.

“This isn’t something that doctors necessarily know how to do, just because somebody says they ought to,” Laws said. “Rather than seeing this as a slam or some kind of a negative statement about doctors’ personalities or how they treat patients, it really is in my view a question of having a set of skills.”

Laws acknowledged that the study did not evaluate whether doctors and nurse practitioners who asked more open-ended questions or who explored patient problems and needs were any more effective in increasing the medication adherence of their patients. The researchers are working toward that goal in their current work.

In addition to Laws and Wilson, other study authors include Yoojin Lee at Brown, Mary Catherine Beach of the Johns Hopkins University School of Medicine, William Rogers of Tufts Medical Center, Somanth Saha and P. Todd Korthius of the Oregon Health and Science University, and Victoria Sharp of St. Luke’s-Roosevelt Hospital in New York.