AUSTIN, Texas — Seed size is controlled by small RNA molecules inherited from a plant’s mother, a discovery from scientists at The University of Texas at Austin that has implications for agriculture and understanding plant evolution.

“Crop seeds provide nearly 70 to 80 percent of calories and 60 to 70 percent of all proteins consumed by the human population,” said Z. Jeff Chen, the D.J. Sibley Centennial Professor in Plant Molecular Genetics at The University of Texas at Austin. “Seed production is obviously very important for agriculture and plant evolution.”

Chen and his colleagues, including David Baulcombe at the University of Cambridge, provide the first genetic evidence that seed development is controlled by maternally inherited “small interfering RNAs,” or siRNAs. 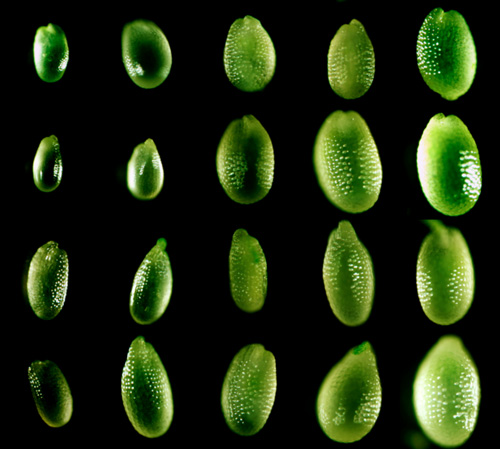 They published their research April 3 in the journal PNAS.

SiRNAs are known to control a number of aspects of growth and development in plants and animals. The researchers used Arabidopsis, a rapidly growing flowering plant in the mustard family, for the study.

In this case, the researchers found that the siRNAs influence the development of a seed’s endosperm, which is the part of the seed that provides nutrients to the developing plant embryo, much like the placenta in mammals. The endosperm is also the source for most of the nutritional content of the seed for humans and animals.

Despite the importance of the endosperm, little has been known about the molecular mechanisms that govern its growth.

The scientists found that when a female plant with a duplicate genome (known as a tetraploid) is crossed with a male plant with a normal genome (called a diploid), not only is there an increase in the maternal genome in their offspring’s seed endosperm, but there is also an associated increase in maternal siRNAs.

Those maternal siRNAs decrease the expression of genes that lead to larger endosperm growth, meaning that the siRNAs create smaller seeds.

“Now we understand that siRNAs play a large role in sensing maternal and paternal genome imbalance and controlling seed development, and that maternal control is important,” said Chen.

The researchers are working to find out how exactly siRNAs regulate gene expression in the endosperm and embryo and how they control seed size. These new findings will enable scientists to develop biotechnological tools for improving seed production and crop yield.

But Chen cautioned that “bigger isn’t always better.” In fact, in his experiments, seeds lacking the control of the maternally inherited siRNAs grew so large that they collapsed.

Chen’s research is funded by the National Science Foundation Genetic Mechanisms program. It was also the result of a Fulbright Award he received to do research with Baulcombe, a Royal Society research professor, at Cambridge. Baulcombe is widely recognized for his pioneering and seminal research discovering the role of siRNAs in gene silencing in plants.

Read more about the research of Dr. Z. Jeff Chen: