A new scientific instrument, a “time machine” of sorts, built by UCLA astronomers and colleagues, will allow scientists to study the earliest galaxies in the universe, which could never be studied before.

The five-ton instrument, the most advanced and sophisticated of its kind in the world, goes by the name MOSFIRE (Multi-Object Spectrometer for Infra-Red Exploration) and has been installed in the Keck I Telescope at the W.M. Keck Observatory atop Mauna Kea in Hawaii.

MOSFIRE gathers light in infrared wavelengths — invisible to the human eye — allowing it to penetrate cosmic dust and see distant objects whose light has been stretched or “redshifted” to the infrared by the expansion of the universe. 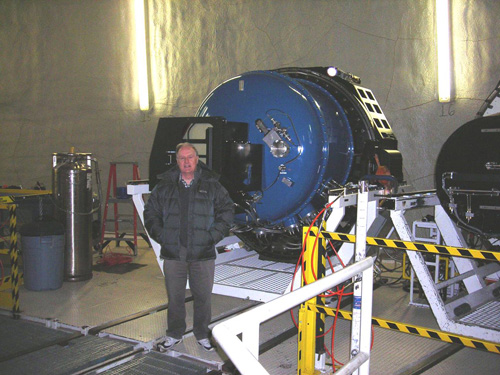 UCLA professor Ian McLean in front of MOSFIRE in the dome of the Keck I Telescope on the summit of Mauna Kea, Hawaii, just before light collected by the telescope was fed into MOSFIRE for the first time on April 4, 2012. (Image credit: Ian S. McLean)

“The instrument was designed to study the most distant, faintest galaxies,” said UCLA physics and astronomy professor Ian S. McLean, project leader on MOSFIRE and director of UCLA’s Infrared Laboratory for Astrophysics. “When we look at the most distant galaxies, we see them not as they are now but as they were when the light left them that is just now arriving here. Some of the galaxies that we are studying were formed some 10 billion years ago — only a few billion years after the Big Bang. We are looking back in time to the era of the formation of some of the very first galaxies, which are small and very faint. That is an era that we need to study if we are going to understand the large-scale structure of the universe.”

With MOSFIRE, it will now become much easier to identify faint galaxies, “families of galaxies” and merging galaxies. The instrument also will enable detailed observations of planets orbiting nearby stars, star formation within our own galaxy, the distribution of dark matter in the universe and much more.

“We would like to study the environment of those early galaxies,” said McLean, who built the instrument with colleagues from UCLA, the California Institute of Technology and UC Santa Cruz, along with industrial sub-contractors. “Sometimes there are large clusters with thousands of galaxies, sometimes small clusters. Often, black holes formed in the centers of galaxies.” 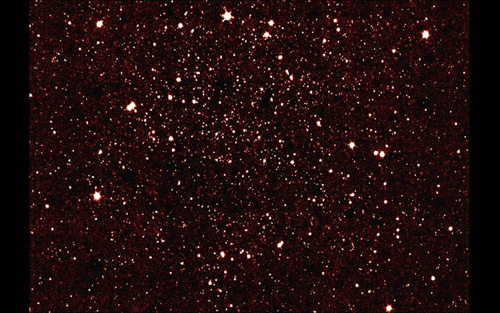 MOSFIRE image of very old stars. This MOSFIRE image from the Keck I telescope shows the high quality of the optics of the new camera. The image is a globular cluster of very old stars, known as NGC5053, which is more than 53,000 light years away, in the halo of the Milky Way. In the constellation of Coma Berenices, it is more sparse than most globular clusters and lacks the usual central concentration of stars. (Image credit: Ian S. McLean/W.M. Keck Observatory)

Light collected by the Keck I Telescope was fed into MOSFIRE for the first time on April 4, producing an astronomical image. Astronomers are expected to start using MOSFIRE by September, following testing and evaluation in May and June.

MOSFIRE allows astronomers to take an infrared image of a field and to study 46 galaxies simultaneously, providing the infrared spectrum for each galaxy. Currently, it can take three hours or longer to obtain a good spectrum of just one galaxy, McLean noted.

McLean built the world’s first infrared camera for wide use by astronomers in 1986 and since then has built eight increasingly sophisticated infrared cameras and spectrometers — which split light into its component colors — as well as helping on a few others.

McLean and Charles Steidel, the Lee A. DuBridge Professor of Astronomy at the California Institute of Technology, led the project to build MOSFIRE from scratch over seven years. Harland Epps, a UC Santa Cruz professor of astronomy and astrophysics, designed the optics for the instrument. A team of nearly two dozen people helped, including Kristin Kulas and Gregory Mace, UCLA graduate students in physics and astronomy who work in McLean’s laboratory; Keith Matthews, an instrument designer from Caltech; and Sean Adkins, an engineer who is the instrument program manager for the Keck Observatory in Hawaii. Most of the mechanical parts for MOSFIRE were built at UCLA and Caltech. The slit unit that enables 46 objects to be isolated was manufactured in Switzerland. The computer programming was led by UCLA.

MOSFIRE cost $14 million and likely would have cost at least twice as much if the scientists had not built it themselves, McLean estimates. 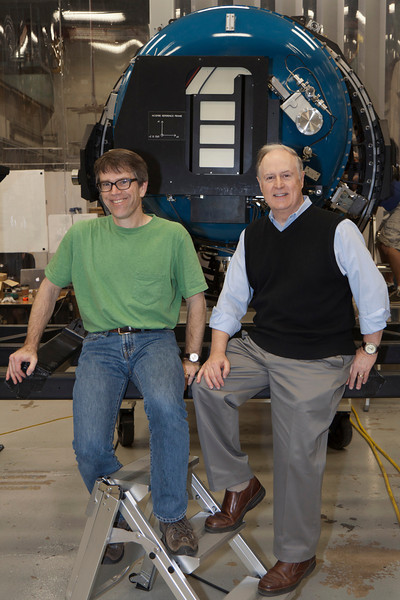 MOSFIRE was federally funded by the National Science Foundation (through the Telescope System Instrumentation program), and by Gordon and Betty Moore. Gordon Moore is co-founder, former chairman and chief executive officer, and chairman emeritus of Intel Corp.

“He is a wonderful man with a penetrating intellect,” McLean said of Moore. “We are deeply indebted to him and hope to be able to show him MOSFIRE this summer.”

“We had an outstanding team,” he added, “with four institutions involved and many industrial partners. It was a fantastic team effort.”

Discoveries made with NIRSPEC include the detection of water on comets, insights into the stars orbiting the enormous black hole at the center of the Milky Way galaxy, and the discovery of the chemical composition of brown dwarfs. Brown dwarfs, failed stars about the size of Jupiter but with a much larger mass, are considered the “missing link” between gas giant planets like Jupiter and small, low-mass stars. 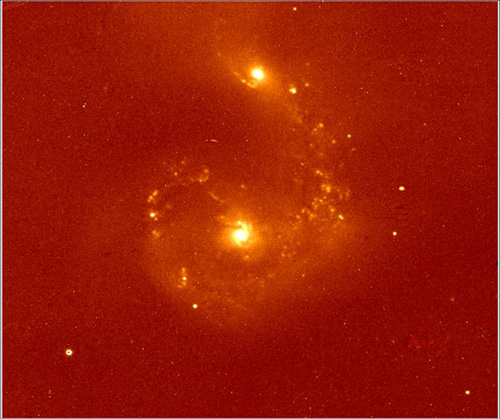 MOSFIRE image of colliding Atennae galaxies. One of the first infrared pictures from MOSFIRE on the Keck I Telescope showing two galaxies in collision: NGC4038 (upper) and NGC4039. Also known as the Antennae galaxies, these objects are about 45 million light years away, in the constellation of Corvus. The exposure was a brief 60 seconds under cloudy conditions. (Image credit: Ian S. McLean/W.M. Keck Observatory)

McLean is also the principal investigator for a research imaging instrument called FLITECAM, which is scheduled to be used, starting this October, on NASA’s SOFIA (Stratospheric Observatory for Infrared Astronomy), a modified 747 SP jetliner that is the world’s largest airborne observatory. FLITECAM, which McLean and his colleagues built at UCLA, is a camera that can be converted to a spectrometer electronically, using a computer. It will be used to study planets orbiting other stars and stars eclipsed when an asteroid or comet in the outer part of the solar system passes in front of them.

McLean “was given the bug to build instruments” by his Ph.D. advisor, David Clarke, at Scotland’s University of Glasgow. McLean built an instrument in the 1970s that was able to make measurements of polarized light no one had ever made before.

An expert on infrared detector systems, McLean is author of a 2008 book used in university courses, “Electronic Imaging in Astronomy: Detectors and Instrumentation,” which demonstrates how we can now take digital pictures across the electromagnetic spectrum, at any wavelength, from gamma rays to radio waves.