During his visit to the Yale campus as a Chubb Fellow, Indian movie actor Shah Rukh Khan said he has no higher objective in life than to make people happy.

Judging by the cheers, howls, laughter, chants, smiles and applause from the more than 1,600 people who gathered to hear the “King of Bollywood” speak in the Shubert Theater on April 12, Khan achieved that purpose while in New Haven.

The award-winning actor — one of the most watched film stars in the world, who is also considered one of the sexiest men in Asia — offered some words of inspiration to students, participated in a question-and-answer session, and entertained his audience by inviting Timothy Dwight College master and dean of undergraduate admissions Jeffrey Brenzel to learn some Hindi and imitate some of his more classic film poses. Some audience members were on their feet when the movie star slid off his suit jacket to participate in a lively dance with Yale sophomore Natalia Khosla.

In his Chubb Lecture, Khan shared some advice to the student members of his audience that, he said, would help them “survive this life.” He advised them to express themselves creatively in a way that is honest and allows them to be true to themselves; to find what makes them happy and pursue it; and to embrace failure, which, he said, ultimately leads to success by forcing one to be pragmatic, work harder, and become more disciplined. 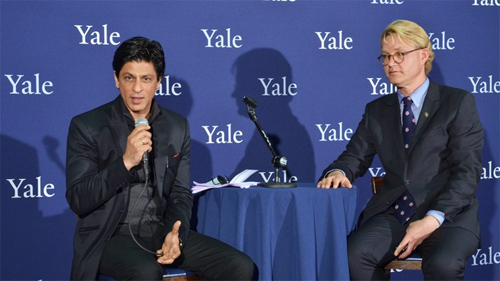 Hours before Khan had arrived in New Haven, those with tickets for the event had begun lining up outside the Shubert Theater. The queue stretched around the corner and part of the way down Chapel Street. Later, while seated in the theater while Khan took part in a brief news conference with members of the media, audience members cheered exuberantly when they heard Kahn was making his way onstage.

Khan started his talk by telling young audience members to pursue creative endeavors in a way that will allow them to balance being genuine and being appreciated for their art.

“Creative expression comes from the deepest experience of the artist himself,” he said. “A good artist cannot be separate from his creation. Good art is honest art. A man may be an artist, a writer, a sculptor, an actor or a totem-pole carver — whatever he is, if what he creates is true to himself, it becomes a vivid testimonial to human creativity. If it lacks honesty, its entire premise is a waste.”

He acknowledged that he has sometimes felt despair when his work has been criticized, adding, “You must learn at such times to be able to see yourself.

“It’s frustrating that I find myself living up to other people’s interpretation of what I ought to be. …” Khan continued. “It becomes a tight balancing act, to keep doing what I do best and not be bothered by the reactions of people I do it for in the first place.”

The film star also told the students they should not be afraid to “defy conventions” or to “walk alone if necessary.”

He urged them to love their parents — who, he maintained, are their best friends in life. 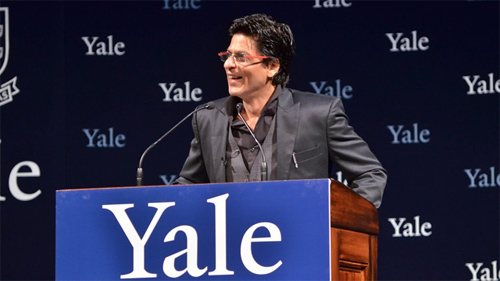 He said learn to laugh at yourselves. Never become cynical about yourself and your life. Image credit: Michael Marsland

“I lost my parents very early in my life, and I miss them dearly,” Khan remarked. “So all of you who still have yours: Don’t listen to them; fool them if you must; a bit of lying is also welcome. But make sure you cherish what you have because when you don’t have them — like me — you really miss someone to be rude to, someone you can take for granted, someone you can say and do whatever you wish with. You miss the comfort of being loved unconditionally. … If you want to survive life, it is best to begin to respect the gift of love right now.”

Recalling his experience of poverty earlier in life, Khan said that he began to equate being poor with failure. Having a fear of failure, he commented, brings one to “the true path to success.” He said he learned through failure that if one approach doesn’t work another one will. Failure also taught him who his real friends are, and made him discover the strength of his own will, Khan commented.

“My hope for all of you is that you retain a lifelong love of learning, that you never cease to dream exciting and inspiring dreams, and — when you fail — you fail well enough to succeed the next time. Don’t be afraid of being afraid: Be afraid of not facing your fears and failures,” the actor urged.

Following his talk, Khan engaged in a discussion about his films and his personal experiences with Brenzel, Yale Law School student Nihkil Sud, and Sarika Arya ’11, who is currently a Woodbridge Fellow in the Office of International Affairs. Noting the appreciation Khan has received all over the world and the “frenzy” of his fans, Arya asked the film star how he would feel if his popularity were to come to an end. 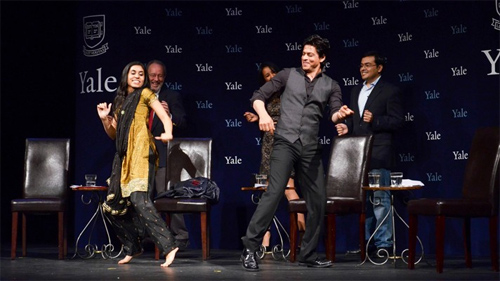 He danced his trademark Chammak Challo dance from his movie “Ra.One” alongside Natalia Khosla, a member of Yaledancers and the Yale Jashan Bhangra dance team. Image credit: Michael Marsland

Recounting how some of the films he has starred in are not entirely realistic and are often more entertaining than serious, Khan replied: “First, one thing I will never ever do is to take myself seriously. … I want to do the same things I did at [age] 4. I am not going to intellectualize … The day I start taking myself seriously is the day it will end. So I’m going to stay silly.”

Asked by Sud about his future goals, Khan said that while he has an interest in creating a studio and a stadium, and improving the cricket team he co-owns, his chief ambition is to continue to entertain.

“My bottom line is [to do] whatever makes you feel happy,” he said. “I’m being very honest. … I want to make people smile a lot.”

His audience laughed heartily when Khan recited some lines from his movie “Don 2” and taught Brenzel some of his gangster poses, and cheered wildly while he danced his trademark Chammak Challo dance from his movie “Ra.One” alongside Khosla, a member of Yaledancers and the Yale Jashan Bhangra dance team.

Isha Ambani ’14, the president of the South Asian Society at Yale, who introduced Khan at the Shubert Theater, told how the actor had remained true to a promise he made four years ago to visit the campus at her invitation. She said that despite the actor’s popularity (“He has stolen the hearts of millions of girls,” she remarked), he “goes out of his way to spread happiness.”

Khan’s visit to Yale was his first at an American university. During his talk, he described Yale as “one of the most beautiful institutions” he has ever seen, and concluded his appearance on the stage by saying, “This is the most fun I’ve had in months.” While on campus, he also met with Yale Daily News reporters and attended a reception and dinner at Timothy Dwight College with students, fellows of the college, and other members of the Yale community.

The Chubb Fellowship is devoted to encouraging and aiding Yale students interested in the operations of government and in public service. More news of Khan’s visit can be found on Yale Facebook.