Using a specially designed facility, UCLA stem cell scientists have taken human skin cells, reprogrammed them into cells with the same unlimited property as embryonic stem cells, and then differentiated them into neurons while completely avoiding the use of animal-based reagents and feeder conditions throughout the process.

Generally, stem cells are grown using mouse “feeder” cells, which help the stem cells flourish and grow. But such animal-based products can lead to unwanted variations and contamination, and the cells must be thoroughly tested before they can be deemed safe for use in humans.

The UCLA study represents the first time scientists have derived induced pluripotent stem (iPS) cells with the potential for clinical use and differentiated them into neurons in animal origin–free conditions using commercially available reagents to facilitate broad application, said Saravanan Karumbayaram, the first author of the study and an associate researcher with the Eli and Edythe Broad Center of Regenerative Medicine and Stem Cell Research at UCLA.

The Broad Center researchers also developed a set of standard operating procedures for the process so that other scientists can benefit from the derivation and differentiation techniques. The process was performed under good manufacturing practices (GMP) protocols, which are tightly controlled and regulated, so the cells created meet all the standards required for use in humans. 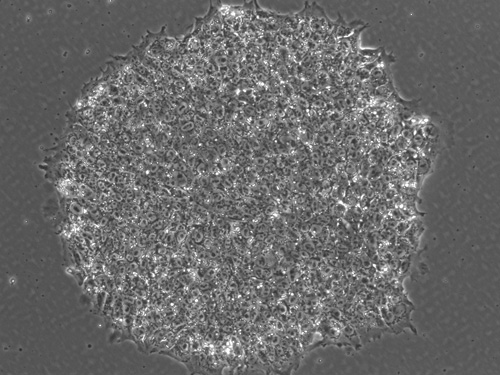 “Developments in stem cell research show that pluripotent stem cells ultimately will be translated into therapies, so we are working to develop the methods and systems needed to make the cells safe for human use,” Karumbayaram said.

The study was published Dec. 7 in the early online edition of the inaugural issue of the peer-reviewed journal Stem Cells Translational Medicine, a new journal that seeks to bridge stem cell research and clinical trials.

Karumbayaram tested six different animal-free media formulations before arriving at a composition that generated the most robust pluripotent stem cells. He combined two commercial media solutions to create his own mix and tried different concentrations of an important growth factor.

“The colonies we get are of very good quality and are quite stable,” said Karumbayaram, who compared his animal-free colonies to those created conventionally using mouse feeder cells.

Efficiency did suffer. Fewer colonies were created using the animal-free feeders, but the colonies did remain stable for at least 20 passages.

The neurons that resulted from the process started life as a small skin-punch biopsy from a volunteer. The skin cells were then reprogrammed to become pluripotent stem cells with the ability to make any cell in the human body. These iPS cells were grown in colonies and were later coaxed into becoming neural precursor cells and, finally, neurons.

The animal-free cells were compared at every step in the process to cells produced by typical animal-based methods, Karumbayaram said, and were found to be of very similar quality.

“We were very excited when we saw the first colonies growing, because we were not sure it would be possible to derive and grow cells completely animal-free,” he said.

Because the cells were grown in a special facility designed to culture animal-free cells, the testing and examination required to make clinical-grade cells should be much simpler, said William Lowry, senior author of the study and an assistant professor of molecular, cell and developmental biology in the UCLA Division of Life Sciences.

To date, at least 15 animal-free iPS cell lines have been created at the Broad Stem Cell Research Center.

“It’s critical to note that we are nowhere near ready to use these cells in the clinic,” Lowry said. “We are working to develop methods to make sure these cells are genetically stable and will be as safe as possible for human use. The main goal of this project was to generate a platform that will one day allow translation of stem cells to the clinic.”

The study was supported by the California Institute of Regenerative Medicine, the National Institutes of Health, the U.S. Department of Defense, the Foundation to Eradicate Duchenne, the UCLA Muscular Dystrophy Core Center and the Broad Stem Cell Research Center.