“I promised them I would look into why that was happening,” Gawarkiewicz says.

The result of his investigation was a discovery that the Gulf Stream diverged well to the north of its normal path beginning in late October 2011, causing the warmer-than-usual ocean temperatures along the New England continental shelf.

The researchers’ findings, “Direct interaction between the Gulf Stream and the shelfbreak south of New England,” were published in the August 2012 issue of the journal Scientific Reports.

To begin to unravel the mystery, Gawarkiewicz and his colleagues assembled data from a variety of sources and recreated a record of the Gulf Stream path during the fall of 2011. First, they tapped into data collected by a program called eMOLT, a non-profit collaboration of fishing industry, research, academic and government entities, run by James Manning of National Oceanic and Atmospheric Administration’s Northeast Fisheries Science Center. For more than a decade the program has recorded near-bottom ocean temperatures by distributing temperature probes to lobstermen.

Manning and scientists from WHOI, including Robert Todd and Magdalena Andres, analyzed a time series of temperatures from two eMOLT sites, OC01 and TA51, which were located over the outer continental shelf near the shelfbreak, and identified two events when temperatures suddenly increased by 6.2 and 6.7°C, respectively, to highs of more than 18°C. 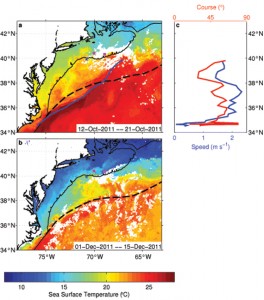 The figures show the maximum sea surface temperatures for the periods (a) October 12–21, 2011, and (b) December 1–15, 2011. The coastline and shelfbreak are indicated by the thin black contours. The dashed black lines in (a) and (b) denote the climatological mean location of the Gulf Stream North Wall in October and December. In (a), the blue line denotes the path of a surface drifter released off Cape Fear, NC, on October 12, 2011, that was entrained in the Gulf Stream and reached Georges Bank 8 days later. The drifter's speed (blue) and course (red) are shown as functions of latitude in (c). In (a–b), the blue star indicates the location of the OOI test mooring, and the magenta squares denote the locations of the eMOLT observations. (Image courtesy Robert Todd, Woods Hole Oceanographic Institution)

“These are very dramatic events for the outer continental shelf, at least 2°C warmer than we’ve seen since 2001,” says Gawarkiewicz. “Near-bottom temperatures of 18°C on the outer shelf are extremely high for late autumn.” The maximum recorded temperature in December 2011 was the warmest bottom temperature recorded in 6 years of records at the OC01 site.

In typical years, the warm Gulf Stream waters only indirectly influence ocean currents and temperatures near the continental shelfbreak south of New England when eddies, called warm core rings, pinch off from the Gulf Stream and drift toward the outer continental shelf. Such rings normally drift past a site after a few weeks, and therefore cause only limited warming of the water on the outer shelf.

Gawarkiewicz and his colleagues collected additional data on water temperature and salinity from December 4, 2011 through January 4, 2012, from instruments on temporary test moorings placed 12 km south of the shelfbreak by the Ocean Observatories Initiative (OOI). The researchers compared those salinity measurements to historical data, and discovered that high salinity levels – consistent with the salinity of waters carried by the Gulf Stream – coincided with the warming periods.

The extent and duration of the two 2011 warming events combined with the high salinity observed by the researchers suggested the cause was not a transient warm core ring, but the Gulf Stream itself that carried warm, salty water to the outer shelf.

To solidify that finding, Gawarkiewicz received serendipitous help from students in the Marine Advanced Technology Education (MATE) program at Cape Fear Community College in Wilmington, NC, who had deployed a surface drifter during the period coinciding with the two warming events. Drifters use satellites to transmit their positions roughly every six hours, key information for the WHOI scientists, who analyzed the drifter tracks and speeds.

“Drifters around the edges of warm core rings drift toward the continental shelf at about 1 knot,” Gawarkiewicz says. “But we saw the drifter cut across the slope towards the shelf at about 2.5 knots. It only took it eight days to travel from Cape Fear, North Carolina, to a point 40 miles south of Georges Bank, a total distance of 580 miles.”

The periods of high speeds for the drifters coincided with the records for high temperatures on the outer shelf, which told the scientists that the core of the Gulf Stream had diverted to 39.9°N at 68°W – 125 miles north of its mean position, further north than had ever been recorded by satellite altimeters at this particular longitude.

The temporary shift in Gulf Stream path observed last fall potentially has significant longer-term implications. Studies have shown that temperature increases of 2°C have caused major shifts in silver hake populations, for example, and in spring 2012, migratory bluefish and striped bass were observed off the coast of Cape Cod much earlier than in previous years. But, the scientists say, more research is needed to determine just how the Gulf Stream’s behavior in 2011 affected the continental shelf ecosystem and marine organisms. 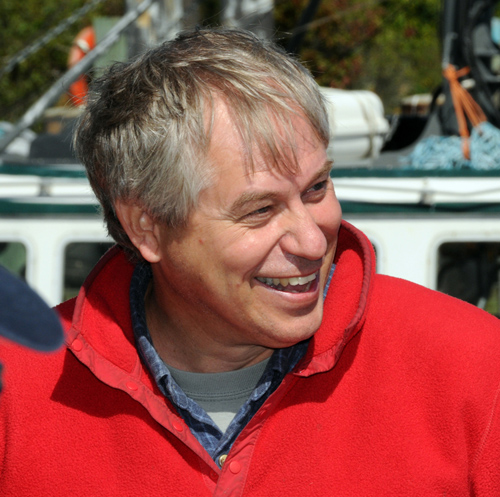 Glen Gawarkiewicz, a senior scientist in WHOI's Physical Oceanography Dept., and his colleagues assembled data from a variety of sources and recreated a record of the Gulf Stream path during the fall of 2011. They discovered that, in late October and early November 2011, the Gulf Stream diverged well to the north of its normal path, causing the warmer-than-usual ocean temperatures along the New England continental shelf. (Photo by Jayne Doucette, Woods Hole Oceanographic Institution)

In the meantime, Gawarkiewicz and his colleagues will be keeping an eye on what the Gulf Stream does this fall, with the hope of someday being able to predict such a shift. “We’re checking in from time to time to monitor it. We’ll be talking to the fishermen, and academics, and keeping an eye on things,” he says.

Fishermen David Spencer, Fred Mattera, and Norbert Stamps first alerted the researchers to the anomaly. Profile data were made available by the OOI, which is funded by the National Science Foundation and managed by the Consortium for Ocean Leadership. Tim Shaw and David Calhoun at Cape Fear Community College provided drifter data. WHOI scientists on this project were supported by the NSF, the Cooperative Institute for the North Atlantic Region, the Penzance Endowed Fund in Support of Assistant Scientists, and the Postdoctoral Scholar Program at WHOI.