What Will You Do If an Earthquake Hits?

The Central Virginia Seismic Zone, it’s called, and it sometimes shakes everything in sight.

As long ago as 1774, people in central Virginia felt small earthquakes and suffered damage from intermittent larger ones. A magnitude 4.8 quake happened in 1875.

Then last year, on August 23, 2011, a magnitude 5.8 quake hit the same region. Several aftershocks, ranging up to magnitude 4.5, occurred after the main tremor.

Will there be another such quake in the mid-Atlantic region?

Whether you live in that part of the U.S., or elsewhere around the country or the world, would you know what to do in an earthquake?

The Great ShakeOut is a series of earthquake drills that will be held in California and many other western states, along with southeast states and Washington D.C., several U.S. territories, and Canada and other countries.

Great ShakeOut drills encourage people to practice how to “Drop, Cover and Hold On” to protect themselves during earthquakes. Other preparedness actions are also recommended.

The first ShakeOut drill was held in southern California in 2008, based on the “ShakeOut Scenario,” a study of a large earthquake on the San Andreas fault. 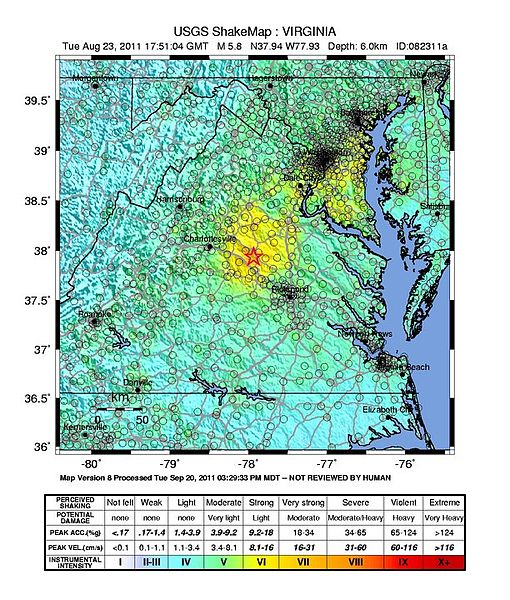 A magnitude 5.8 quake hit central Virginia in August, 2011; when will another strike? Image credit: USGS

The Southern California Earthquake Center (SCEC) at the University of Southern California, funded by the National Science Foundation (NSF) and U.S. Geological Survey (USGS), developed advanced simulations of the quake to estimate potential losses and casualties, and to show the public how shaking would be felt throughout the region.

SCEC staff members coordinate the research of hundreds of geologists and other scientists across the country, and communicate important information to reduce earthquake risks.

SCEC created a registration system where participants in the Great ShakeOut could be counted in the overall total. 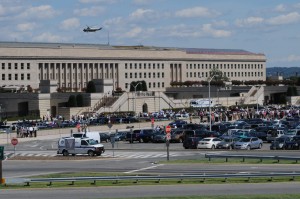 The Great ShakeOut website provides a basis for motivating earthquake preparedness activities that may be adapted for use by states, regions and countries worldwide, each of which have developed new materials and concepts.

“ShakeOut is a great example of the public benefit from long-term NSF investments in basic scientific research and education,” says Greg Anderson, program director in NSF’s Division of Earth Sciences.

“Long-term support for SCEC has advanced our fundamental understanding of earthquakes and the threats they pose. ShakeOut will help people nationwide learn to respond to earthquakes safely, and to protect their families and themselves.”

Part of the appeal of the ShakeOut is its simplicity.

At a minimum, participants practice “Drop, Cover, and Hold On,” the recommended procedure for self-protection in an earthquake. Many schools and other organizations also practice additional aspects of their preparedness plans.

The 2012 Great ShakeOut will be held on October 18, 2012, at 10:18 a.m. local time in each participating state or region, with more than 12 million people in businesses, government offices, neighborhoods, schools and households expected to take part.

Registering allows SCEC to know what people are planning for their drills, and how many are involved. Once registered, participants receive updates and preparedness information.

Because of the success of the ShakeOut in California, SCEC has worked with other regions to create ShakeOut drills, complete with websites and registration systems all managed by SCEC.

In addition to the areas already mentioned that are holding drills on October 18th, the central U.S. region, which held drills in February, 2012, will do so again in February, 2013.

Utah held its first ShakeOut in April, 2012; New Zealand held the first nationwide ShakeOut in September, 2012; and ShakeOut drills are being organized across Japan.

“ShakeOut is changing the way people and organizations are approaching community-wide earthquake preparedness,” says Benthien. “Our goal is to make it easy for them to get better prepared so they survive, and recover quickly.”

If you live in central Virginia, anywhere along the East Coast, or, in fact, anywhere around the world, participating in the Great ShakeOut could save your property–and your life.