Katherine Boo talks of hope and struggle in Annawadi, India

Pulitzer Prize-winning author Katherine Boo found that despite having to struggle daily to survive, the people who live in Annawadi, India, also share the common hopes, dreams and aspirations of people everywhere in seeking to better themselves and their children.

Boo, the author of Behind the Beautiful Forevers: Life, Death and Hope in a Mumbai Undercity, shared her experiences as a journalist reporting from the Mumbai slum during a 2012 University of Delaware First Year Common Reader program presentation held Wednesday, Oct. 10, in Mitchell Hall.

Speaking on the same day when Behind the Beautiful Forevers, published by Random House, was named as one of five finalists for the National Book Award for nonfiction, Boo was introduced to members of the Class of 2016 by Margaret Andersen, Edward and Elizabeth Goodman Rosenberg Professor of Sociology and executive director of the President’s Diversity Initiative.

“You are now part of a UD tradition, where we gather on a day like today, to meet a major national author, whose book was selected for you by a diverse group of faculty and staff because of its engagement of some of the pressing issues of the day,” Andersen said. “This year’s book was selected because of its concern with social justice and global inequality.” 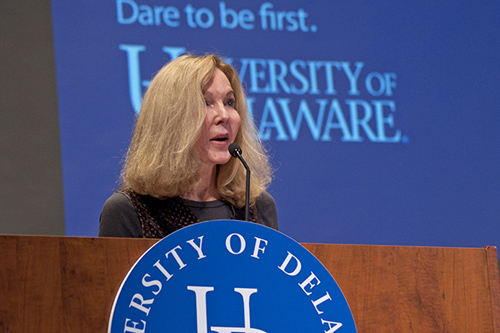 Boo, whose book also has been named as a finalist for UK’s leading nonfiction award, the Samuel Johnson Prize, told the audience of about 650 students that despite their differences in circumstances, young people everywhere share the same dreams and need for questioning the reality of their situation.

“In reality, there is only one big, complicated ‘us,’” Boo said. “We’re all part of a big global family.”

A recipient of the 2000 Pulitzer Prize for Public Service for her Washington Post series on group homes for people with intellectual disabilities, Boo said that, in writing her latest book, she found herself asking what it takes for people to improve their lives, and who makes it and who does not make it out of poverty.

“The public often assume that failure happens because of the lack of capability of the poor,” Boo said. “More often, these failures originate from those with the most power.”

After being accepted by the people there, Boo got to know individuals such as Abdul, a Muslim teenager who saw picking up trash as a way out of poverty.

“I don’t think of myself as telling single, isolated stories, but as trying to make the reader see life through people whose lives are in the balance,” Boo said. “The women and children I met are the real driving force of any upward movement, and when change does happen, it is because those in power recognize the injustice and do something to change it.” 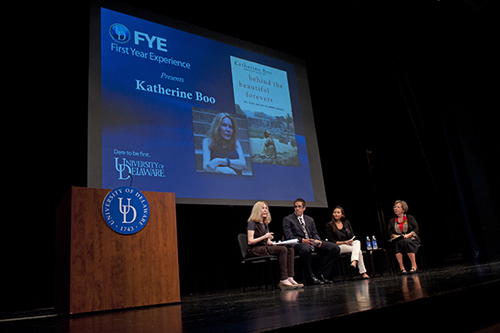 Katherine Boo discusses her book, "Behind the Beautiful Forevers," which has been nominated for a National Book Award. Photo by Duane Perry and Doug Baker

As a writer, Boo said that her job is to satisfy whatever doubts she might have about people and their situations, and to work hard to show the reader the complexity of the individuals that she is writing about.

Looking at these people and their lives also compelled Boo to ask herself what choices she would make if faced with such a limited number of options.

“As a reporter, I ask myself a set of questions inspired by the American philosopher John Rawls: How would I design a society if I didn’t know where in it’s hierarchy I would be placed, and if I didn’t know whether I would be a person of wealth and power, or a poor and vulnerable person?” Boo said. “What system would I create and would it be fair? I would be elated if readers of my book asked themselves the same questions.”

Boo also said that as a writer, she refuses to tidy up all the loose ends and unresolved issues in a final chapter overview.

“I refuse to tack on some kind of summary,” Boo said. “This is about intellectual freedom, something we have more of in America than anywhere else. I do hope that you ask yourself if you are truly open to the deep connections you have with people with whom you at first might seem to have no connection.”

Following her talk, Boo responded to questions submitted by student readers and read onstage by Manuela Monsalve, a senior double major in political science and Spanish studies, and sister of the Lambda Theta Alpha Latin sorority.

Monsalve was joined by Jason Hewett, a sophomore double major in English creative writing and communication with a minor in Spanish. Hewett was first place winner in the First Year Seminar essay contest in 2011. 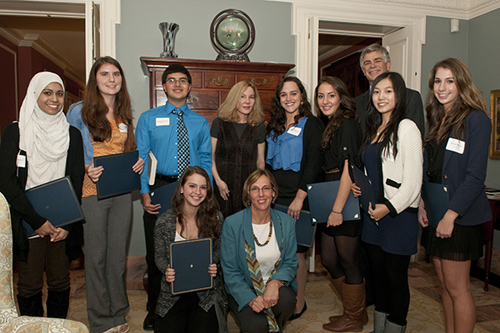 The event, where Boo also met with students after her talk, was followed by a First Year Common Reader essay awards ceremony held at the President’s House.

Nancy Brickhouse, interim provost, welcomed the author and the winners selected from 64 entries. The essays were judged on persuasive use of textual evidence, clarity and creativity.

“Students were asked to select one member of the Annawadi community and, in a unified essay, discuss how the author presents both the achievements experienced by this person and the injustices he or she endures, and how this character, this person inspired the student to reflect upon his or her own situation within the U.S. and the global community,” Brickhouse said. “Judges noticed a common theme within the essays, and it was — perhaps unsurprisingly — an appreciation for the depth and rigor Ms. Boo’s investigation and how her reporting led them to think about their own hardships and achievements.”