In the results of a new study, scientists explain how they used DNA to identify microbes present in the Gulf of Mexico following the Deepwater Horizon oil spill–and the particular microbes responsible for consuming natural gas immediately after the spill.

Water temperature played a key role in the way bacteria reacted to the spill, the researchers found.

Proceedings of the National Academy of Sciences (PNAS) published the results in this week’s journal.

David Valentine and Molly Redmond, geochemists at the University of California at Santa Barbara (UCSB) conducted the study. The National Science Foundation (NSF) and the Department of Energy supported it.

The Deepwater Horizon oil spill was unique, according to Valentine and Redmond, because it happened at such great depth and contained so much natural gas–predominantly methane, ethane and propane. 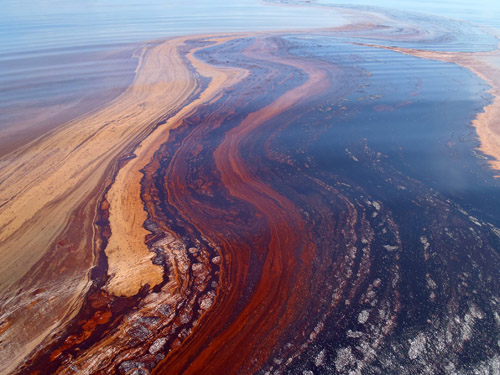 Scientists studied the interaction of the oil spill and microbes in Gulf of Mexico waters. Image credit: Luke McKay, University of Georgia

Those factors influenced the way bacteria responded to the spill.

In earlier studies, Valentine, Redmond and colleagues showed that ethane and propane were the major hydrocarbon compounds consumed in June 2010, two months after the April spill.

By September 2010, the researchers discovered that these gases and all the methane had been consumed.

In May and June of 2010, the scientists found that bacterial communities in the submerged plume were dominated by just a few types–Oceanospirillales, Colwellia and Cycloclasticus–and were very different from control samples without large concentrations of oil or gas.

The bacteria were also very different from the microbial communities in surface oil slicks collected at the same time.

“It’s much warmer at the surface than in the deep water–around 80 degrees Fahrenheit versus 40 F, which is pretty close to the temperature in your refrigerator,” said Redmond, the PNAS paper’s lead author. 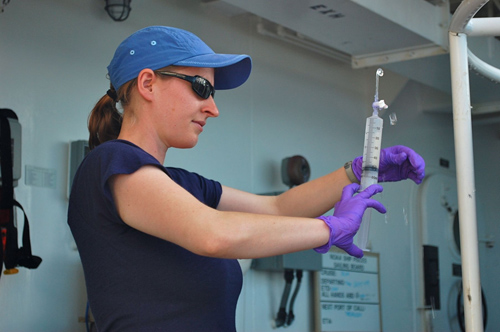 “There was very little natural gas in the surface samples, suggesting that both temperature and natural gas could be important in determining which bacteria bloomed after the spill,” she said.

The bacteria she and Valentine saw in the deep-water samples in May and June were related to types of psychrophilic, or cold-loving bacteria.

“Most bacteria grow more slowly at cooler temperatures–that’s why we keep our food in the refrigerator,” said Redmond.  “But psychrophilic bacteria actually grow faster at cold temperatures than they would at room temperature.”

To provide additional evidence of the importance of temperature, the scientists added oil to water from the Gulf, and incubated it at 40 F and at room temperature (about 70 F). They looked at which bacteria grew at the different temperatures.

In the 40 F samples, Colwellia were most abundant, but were only found in low numbers in the room temperature samples, suggesting that the bacteria have an advantage in cold water. 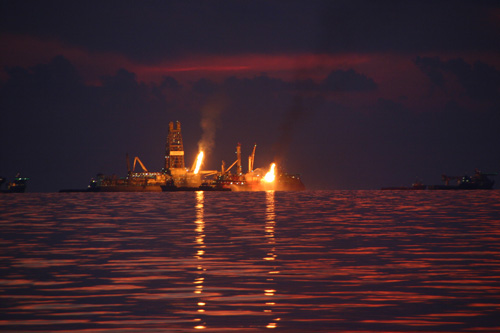 “To figure out which bacteria were consuming methane, ethane, and propane, we used a technique called stable isotope probing, in which we incubated fresh seawater samples from the Gulf with isotopically labeled methane, ethane, or propane,” Redmond said.

The bacteria that grew as they consumed the methane, ethane or propane converted the labeled gases into biomass, including their DNA. By sequencing the DNA, the scientists were able to identify the bacteria.

The bacteria that consumed the ethane and propane were the same Colwellia in the samples from May and June, when ethane and propane consumption rates were high. They were abundant when the researchers incubated oil at 40 F, but not at room temperature.

This suggests, say Valentine and Redmond, that the Colwellia grow well at low temperatures, and can consume ethane and propane.

“The ability of oil-eating bacteria to grow with natural gas as their ‘foodstuff’ is important,” said Valentine, “because these bacteria may have reached high numbers by eating the more-abundant gas, then turned their attention to other components of the oil.

“We’ve uncovered some of the relationships between hydrocarbons released from Deepwater Horizon and the bacteria that responded,” he said.

But questions remain about how the bacteria interacted with one another, and how this affected the fate of the oil.

“This work continues to remind us that the ocean, its microbes, and petroleum hydrocarbons share an ecological history that extends far into the geological past,” said Don Rice, director of NSF’s chemical oceanography program, which funded the research.

“Our ability to respond to marine oil spills is enormously advanced by this kind of basic research.”