There Are No Clear Lines When It Comes To Homeland Security, Says Napolitano

Protecting the nation from terrorism, breaches in cyber security and other threats inside its borders is such a massive undertaking it is “not easy to draw red lines” that can chart individual or departmental responsibilities, Secretary of Homeland Security Janet Napolitano said during a campus visit on Oct. 6.

In a talk hosted by the Jackson Institute of Global Affairs, Napolitano used the example of the so-called “Underwear Bomber” — a suspected terrorist who attempted to blow up (using explosives hidden in his underwear) a Northwest Airlines flight between Amsterdam and Detroit on Christmas Day 2009 — to illustrate the partnerships that are required to ensure the nation’s safety. Her talk in the Law School’s Levinson Auditorium highlighted the importance of international partnerships in that mission.

“Homeland security is really national security and homeland security is really international in nature,” Napolitano told her large audience. She noted that the “Underwear Bomber” suspect is a Nigerian citizen who was educated in the United Kingdom and trained in terrorist tactics in Yemen and who bought his airline ticket in Ghana and flew from Nigeria to Amsterdam before departing from there to the United States. Suspicious passengers — who hailed from 17 different countries — foiled his suspected attack while in Canadian airspace. 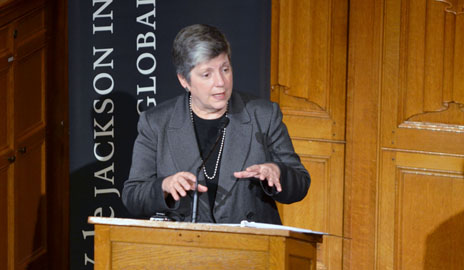 Information about the suspected bomber was collected from various nations by the Transportation Security Administration (part of the Department of Homeland Security), international airlines, and numerous federal agencies. Likewise, her department shared the information it collected with various countries overseas.

“Once we got through the immediate crisis and realized there weren’t others out there on other flights, we took a step back and said this is really a global aviation issue,” said Napolitano. She noted that her department reached out to the United Nations’ International Civil Aviation Organization and worked closely with countries around the world to strengthen the international aviation system against terrorist threats. Her department also set up summits around the world and is working on an agreement with the European Union to establish policies for an exchange of data on suspicious airline passengers.

“Today, America is stronger and more secure than it was 10 years ago, and our international partnerships have been essential to that security,” Napolitano commented. “Security is a shared responsibility, and by working with partners across the country, and increasingly with partners around the world, we will continue to build a strong foundation for a secure and resilient homeland.”

An increasingly scary prospect is the threat of cyber attacks that can cause “massive damage to government and to the private sector,” including the nation’s economy, Napolitano told her audience.

“We are just at the beginning of understanding what needs to be done to really protect cyberspace in a non-military environment,” Napolitano said. She called cyberspace a “free for all,” noting that there are no national boundaries and that “attacks and intrusions can come from anywhere in the world.”

Napolitano said her department — which has 1,500 personnel throughout the world — has to align with the State Department, the Department of Defense and other government units to make sure that homeland security issues are being taken into account in their operations. She said that as her department considers new tactics to fulfill its mission, she is confronted always with the question: Where does homeland security begin and privacy end?

“Where will programs, policies, initiatives that we are undertaking possibly be viewed as infringing on other Constitutional rights?” Napolitano asked. “How do we make sure that we are making decisions in a calculated and intentional way, not being accidental or careless?”

Napolitano joked about the complexity of the work of her department, and questions about the intersection between homeland security and national security, by saying “These are questions with easy areas. There are very clear answers. There is always a right and a wrong. By the way, if you believe that, you probably should be the Secretary of Defense.”

After her 20-minute talk, Napolitano answered questions from Yale students in her audience, covering topics ranging from immigration policy to cyber security to her religious beliefs.

One student asked her if the absence of a serious terror attack on the U.S. since Sept. 11, 2001 should be attributed to luck or to the effective work of her department.

“Is there a possibility that something will get through — or, more likely, something that is homegrown — that can hurt us? We can’t guarantee it won’t happen,” said the Homeland Security Secretary. However, she said, “We are always thinking ahead … about how to most effectively protect us.”