Zach Hambrick agrees with the practice argument – imagine where Bill Gates would be if he hadn’t honed his programming skills, after all – but the Michigan State University scientist takes exception to the view that intelligence plays no role in determining excellence.

In a provocative new paper, Hambrick suggests working memory capacity – which is closely related to general intelligence – may sometimes be the deciding factor between good and great.

In a series of studies, Hambrick and colleagues found that people with higher levels of working memory capacity outperformed those with lower levels – and even in individuals with extensive experience and knowledge of the task at hand. The studies analyzed complex tasks such as piano sight reading. 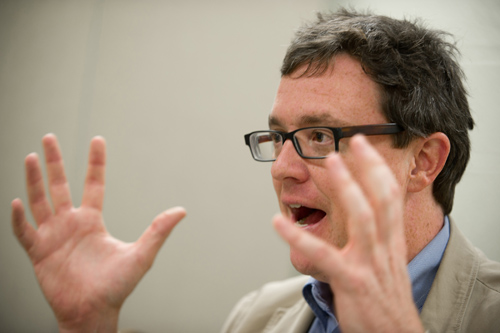 Zach Hambrick, associate professor of psychology, refutes popular theory that intelligence only goes so far in determining excellence. "A high level of intellectual ability puts a person at a measurable advantage – and the higher the better," he says. Photo by G.L. Kohuth

“While the specialized knowledge that accumulates through practice is the most important ingredient to reach a very high level of skill, it’s not always sufficient,” said Hambrick, associate professor of psychology. “Working memory capacity can still predict performance in complex domains such as music, chess, science, and maybe even in sports that have a substantial mental component such as golf.”

In the paper, which appears in the research journal Current Directions in Psychological Science, Hambrick notes that both Gladwell and Brooks wrote bestselling books that make the argument that intelligence only goes so far.

“A person with a 150 IQ is in theory much smarter than a person with a 120 IQ, but those additional 30 points produce little measurable benefit when it comes to lifetime success,” Brooks writes in “The Social Animal.”

Hambrick’s response: “David Brooks and Malcolm Gladwell are simply wrong. The evidence is quite clear: A high level of intellectual ability puts a person at a measurable advantage – and the higher the better.”

Research has shown that intelligence has both genetic and environmental origins, Hambrick said, yet “for a very long time we have tried and failed to come up with ways to boost people’s intelligence.”

Hambrick and his fellow researchers continue to study the issue. “The jury’s still out on whether you can improve your general intelligence,” he said. “We hold out hope that cognitive training of some sort may produce these benefits. But we have yet to find the magic bullet.”