A hemispherewide phenomenon – and not just regional forces – has caused record-breaking amounts of freshwater to accumulate in the Arctic’s Beaufort Sea.

Frigid freshwater flowing into the Arctic Ocean from three of Russia’s mighty rivers was diverted hundreds of miles to a completely different part of the ocean in response to a decades-long shift in atmospheric pressure associated with the phenomenon called the Arctic Oscillation, according to findings published in the Jan. 5 issue of Nature.

The new findings show that a low pressure pattern created by the Arctic Oscillation from 2005 to 2008 drew Russian river water away from the Eurasian Basin, between Russia and Greenland, and into the Beaufort Sea, a part of the Canada Basin bordered by the United States and Canada. It was like adding 10 feet (3 meters) of freshwater over the central part of the Beaufort Sea.

“Knowing the pathways of freshwater in the upper ocean is important to understanding global climate because of freshwater’s role in protecting sea ice – it can help create a barrier between the ice and warmer ocean water below – and its role in global ocean circulation. Too much freshwater exiting the Arctic would inhibit the interplay of cold water from the poles and warm water from the tropics,” said Jamie Morison, an oceanographer with the University of Washington’s Applied Physics Laboratory and lead author of the Nature paper. 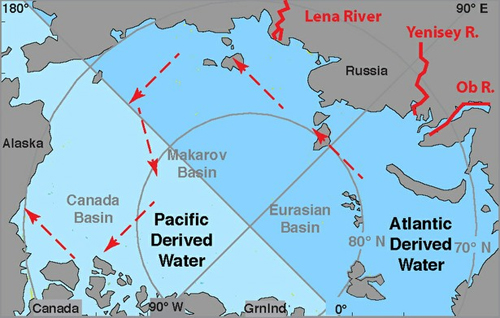 Red arrows show the new path of Russian river water into the Canada Basin. The previous freshwater pathway – across the Eurasian Basin toward Greenland and the Atlantic – was altered by atmospheric conditions created by the Arctic Oscillation. Image credit: University of Washington

Morison and his six co-authors from the UW and NASA’s Jet Propulsion Laboratory are the first to detect this freshwater pathway and its connection to the Arctic Oscillation. The work is based on water samples gathered in the field combined with satellite oceanography possible for the first time with data from NASA satellites known as ICESat and GRACE.

“Changes in the volume and extent of Arctic sea ice in recent years have focused attention on the impacts of melting ice,” said co-author Ron Kwok, senior research scientist with the Jet Propulsion Laboratory in Pasadena, Calif. “The combined GRACE and ICESat data allow us to now examine the impacts of widespread changes in ocean circulation.”

Taken as a whole, the salinity of the Arctic Ocean is similar to the past, but the change in the freshwater pathway means the Eurasian Basin has gotten more saline while the Canada Basin has gotten fresher. 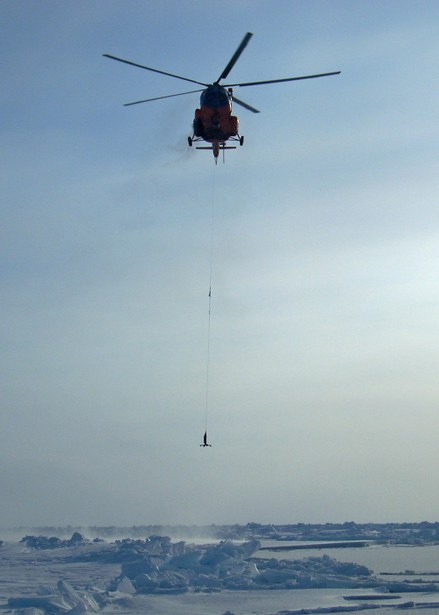 An instrument about to be dropped through an opening in the ice to the seafloor will record ocean bottom pressure to compare with similar data recorded by NASA’s GRACE satellites. Image credit: C. Peralta-Ferriz/UW Applied Physics Laboratory

“The freshening on the Canadian side of the Arctic over the last few years represents a redistribution of freshwater, there does not seem to be a net freshening of the ocean,” Kwok said.

In the Eurasian Basin, the change means less freshwater enters the layer known as the cold halocline and could be contributing to declines in ice in that part of the Arctic, Morison said. The cold halocline normally sits like a barrier between ice and warm water that comes into the Arctic from the Atlantic Ocean. Without salt the icy cold freshwater is lighter, which is why it is able to float over the warm water.

In the Beaufort Sea, the water is the freshest it’s been in 50 years of record keeping, he said. The new findings show that only a tiny fraction is from melting ice and the vast majority is Eurasian river water. 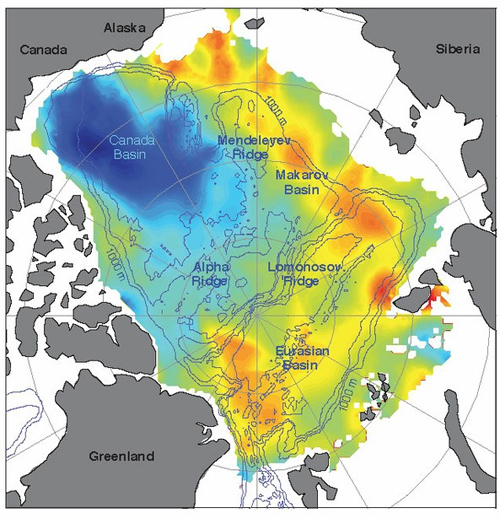 The Beaufort Sea stores a significant amount of freshwater from a number of sources, especially when an atmospheric condition known as the Beaufort High causes winds to spin the water in a clockwise gyre. When the winds are weaker or spin in the opposite direction, freshwater is released back into the rest of the Arctic Ocean, and from there to the world’s oceans. Some scientists have said a strengthening of the Beaufort High is the primary cause of freshening, but the paper says salinity began to decline in the early 1990s, a time when the Beaufort High relaxed and the Arctic Oscillation increased.

“We discovered a pathway that allows freshwater to feed the Beaufort gyre,” Kwok said. “The Beaufort High is important but so are the broader-scale effects of the Arctic Oscillation.”

“A number of people have come up with ways of looking at regional forces at work in the Arctic,” Morison said, “To better understand changes in sea ice and the Arctic overall we need to look more broadly at the hemispherewide Arctic Oscillation, its effects on circulation of the Arctic Ocean and how global warming might enhance those effects.” 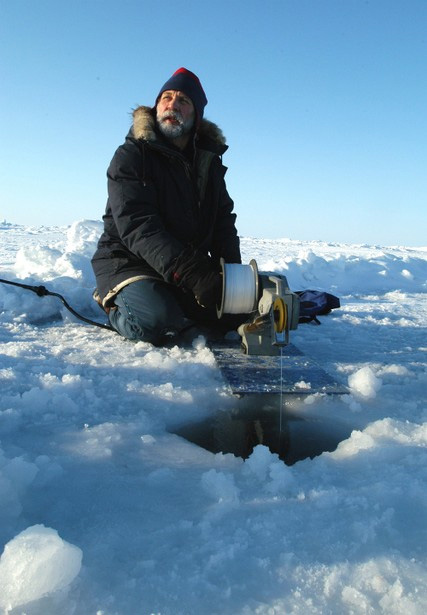 In coming years if the Arctic Oscillation stops perpetuating that low pressure, the freshwater pathway should switch back.

Discerning the track of freshwater from Eurasian rivers would have been impossible without the ICESat and GRACE satellites, Kwok and Morison agree. With satellite measurements of ocean height and bottom pressures, the researchers could separate the changes in mass from changes in density – or freshwater content – of the water column.

“To me it’s pretty spectacular that you have these satellites zipping around hundreds of kilometers above the Earth and they give us a number about salinity that’s very close to what we get from lowering little sampling bottles into the ocean,” Morison said.

About the video: A powerful combination of data from NASA satellites and traditional sampling has led to the discovery of a new pathway of freshwater in the Arctic Ocean, explains this video produced by the UW Applied Physics Laboratory.

Other co-authors are Cecilia Peralta-Ferriz with the UW’s School of Oceanography and Matt Alkire, Ignatius Rigor, Roger Andersen and Mike Steele, all with the UW’s Applied Physics Laboratory.

The work was funded by the National Science Foundation and NASA.

– By Sandra Hines and Alan Buis