Michigan State University’s Gretchen Birbeck – who spends several months each year in the sub-Sahara African nation of Zambia researching epilepsy, HIV /AIDS and cerebral malaria – is the lead author of the medical guideline, which was co-developed with the World Health Organization through the International League Against Epilepsy. 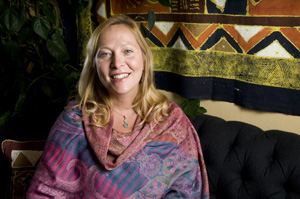 According to the World Health Organization, more than 33 million people worldwide were living with HIV in 2009. Seizure disorders are common among people with HIV, with up to 55 percent of patients requiring treatment with anti-epileptic drugs, known as AEDs, said Birbeck, a professor of neurology and ophthalmology in MSU’s College of Osteopathic Medicine.

Until now, formal treatment guidelines did not exist for those with HIV/AIDS who were in need of AEDs, which treat everything from epilepsy to mood disorders to other neurological ailments.

“Drug interactions between AEDs and ARVs could result in progression to AIDS and/or reduced seizure control,” said Birbeck, also a Fellow of the American Academy of Neurology. “Providing guidelines that help physicians select appropriate therapies for their patients with epilepsy and HIV/AIDS will ultimately improve patient outcomes and possibly decrease the public health threat of the development of drug-resistant HIV.”

In early 2011, Birbeck was awarded a $245,000 grant from the National Institute of Neurological Disorders and Stroke to conduct a cohort study in Zambia – where rates of epilepsy and AIDS are both high – to provide data on possible drug interactions that could make HIV drugs less effective or the disease drug resistant.
Because seizure and HIV/AIDS drug choices are limited in developing countries, the risk of drug interactions is higher in those countries.

“Future research should target epilepsy and HIV/AIDS drug combinations where choices are limited, such as in developing countries, to better understand the risks,” Birbeck said. “It also is important that patients know exactly which drugs they are taking and provide that information to all prescribing health care providers caring for them.”

To establish the guidelines, Birbeck and colleagues systematically reviewed studies published in the medical literature between 1950 and 2010 to determine the prevalence of co-usage of anti-epileptic drugs and antiretrovirals and drug interactions. Nearly 4,500 articles were identified, 68 full studies were reviewed and data from 42 used in the analysis.

Learn more about the guideline’s recommendations at https://www.aan.com/guidelines.

The American Academy of Neurology, an association of 24,000 neurologists and neuroscience professionals, is dedicated to promoting the highest quality patient-centered neurologic care. For more information, visit https://www.aan.com.