*The team scoured more than 500 museum drawers of Green River fossils for crickets and katydids with intact front legs, looking for evidence of ears.*

How did insects get their hearing? A new study of 50-million-year-old cricket and katydid fossils sporting some of the best preserved fossil insect ears described to date are helping to trace the evolution of the insect ear.

According to paleontologist Dena Smith of the University of Colorado Boulder’s Museum of Natural History and University of Illinois Professor Roy Plotnick, who collaborated on the new study at the National Evolutionary Synthesis Center, or NESCent, in Durham, N.C., insects hear with help from some very unusual ears.

Insects have evolved ears at least 17 times in different lineages, said Smith, also an assistant professor in CU-Boulder’s geological sciences department. Smith and Plotnick are trying to figure out when different insects got their ears, and whether predators may have played a role. 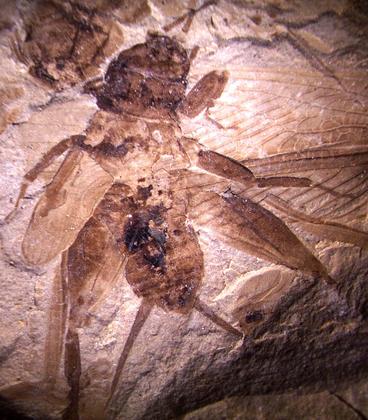 A cricket fossil preserved in the Green River Formation, a series of lake deposits in Wyoming, Utah and Colorado, indicates the insects had developed extremely sensitive ultrasonic hearing by at least 50 million years ago. This particular fossil is from northwestern Colorado. Photo courtesy Dena Smith, University of Colorado.

Modern insects use their ears to tune in to each other’s chirps, trills and peeps. Think of the chorus of crickets, or the love songs of cicadas. But many species can also pick up sounds beyond the range of human hearing, such as the high-pitched sonar of night-hunting bats, according to Smith and Plotnick.

Crickets, moths and other flying insects have ultrasound-sensitive hearing and can hear bats coming, diving or swerving in midflight to avoid being eaten. Insects that evolved such supersensitive hearing would have had a crucial survival advantage, the researchers said.

“The big evolutionary trigger for the appearance of hearing in many insects is thought to be the appearance of bats,” Plotnick said. “Prior to the evolution of bats we would expect to find ears in relatively few insects, but after that we should see ears in more insect groups,” he explained.

Did insect ears get an upgrade when bats came to be? Before this study the fossil evidence for insect hearing was too poorly preserved or scantily described to know for sure, according to the researchers.

To find out, Plotnick and Smith turned to remarkably well-preserved fossils from a series of lake deposits in Wyoming, Utah and Colorado known as the Green River Formation, where some of the earliest bats are found.

Roughly 50 million years ago, fine-grained sediment covered and buried the animals that lived there and managed to preserve them in exquisite detail. “You can see every tiny feature down to the veins in their wings and the hairs on their legs,” said Smith, who has been studying Green River fossils for more than 15 years.

For this study, the researchers examined fossils from a Green River site in Colorado, focusing on crickets and katydids, which have ears on their front legs, just below their knees.

The team scoured more than 500 museum drawers of Green River fossils for crickets and katydids with intact front legs, looking for evidence of ears. “You can just make them out with the naked eye,” Plotnick said. “They look like the eye of a needle.”

In crickets and katydids living today, the ear is a tiny oval cavity with a thin membrane stretched over it that vibrates in response to sound, much like our own eardrum.

The fossil ears measured half a millimeter in length, and were virtually identical in size, shape and position to their modern counterparts. The findings suggest that this group of insects evolved their supersensitive ultrasonic hearing long before bat predators came to be, the researchers say. “Their bat-detecting abilities may have simply become apparent later,” Smith said. “The next step is to look for ears in other insect groups.”

The study appears in this month’s issue of the Journal of Paleontology. NESCent is a nonprofit science center dedicated to cross-disciplinary research in evolution and is jointly operated by Duke University, the University of North Carolina at Chapel Hill and North Carolina State University, with funding from the National Science Foundation.