The pristine state of unpolluted waterways may be their downfall, according to research results published in a paper this week in the journal Geophysical Research Letters.

A species of freshwater algae that lives in streams and rivers, called Didymo for Didymosphenia geminata, is able to colonize and dominate the bottoms of some of the world’s cleanest waterways–precisely because they are so clear.

Didymo does so with a little help from its friends–in this case, bacteria–which allow it to make use of nutrients like phosphorus.

Blooms of Didymo, also known as “rock snot,” says scientist P.V. Sundareshwar of the South Dakota School of Mines and Technology, are made up of stalks that form thick mats on the beds of oligotrophic, or low-nutrient, streams and rivers. Sundareshwar is the paper’s lead author.

“In recent decades, human activities have led to many uncommon environmental phenomena,” he says. “Now we have Didymo.” 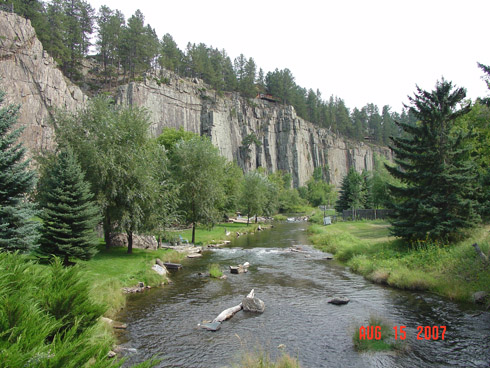 Didymo is present at many points along Rapid Creek, S.D., and in pristine streams and rivers worldwide. Image credit: P. V. Sundareshwar

The freshwater diatom has become notorious. Didymo has taken over low-nutrient rivers in North America and Europe. It has also invaded water bodies in the Southern Hemisphere, including those in New Zealand and Chile.

Because its blooms alter food webs and have the potential to impact fisheries, “Didymo presents a threat to the ecosystem and economic health of these watercourses,” says Sundareshwar.

Algae blooms are usually linked with the input of nutrients that fuel the growth of microscopic aquatic plants. Didymo’s ability to grow prolifically in waters where nutrients such as phosphorus are in short supply puzzled scientists.

Environmental managers tried to mitigate Didymo blooms and predict their spread. But how the diatoms sustained such high growth in oligotrophic systems was unknown.

In a study funded by the National Science Foundation (NSF) and the State of South Dakota Carbon Scientist fund, Sundareshwar and colleagues revealed that Didymo is able to concentrate phosphorus from the water. 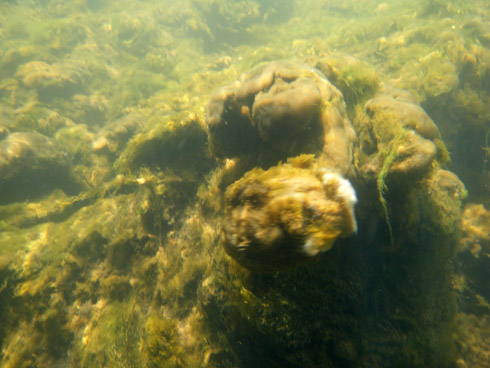 The scientists conducted their research in Rapid Creek, an unpolluted mountain stream in western South Dakota where Didymo was first observed in 2002. The creek regularly has Didymo blooms, with 30 to 100 percent of the streambed covered with Didymo over an area up to ten kilometers (6 miles) long.

Didymo thrives in Rapid Creek through biogeochemical processes in biofilms in the mats. As Didymo mats form, new stalks develop at the surface and older stalks–which have already bound phosphorus–are displaced to the mats’ inner regions.

Phosphorus is available to Didymo thanks to the activity of the bacteria that live inside these mats.

“This study solves the puzzle of how Didymo can produce such large blooms in low-nutrient rivers and streams,” says Tim Kratz, program director in NSF’s Division of Environmental Biology.

“It has uncovered the fascinating mechanism by which Didymo ‘scrubs’ phosphorus from a stream or river,” says Kratz, “then creates a microenvironment that allows microbes to make this nutrient available for Didymo’s growth.” 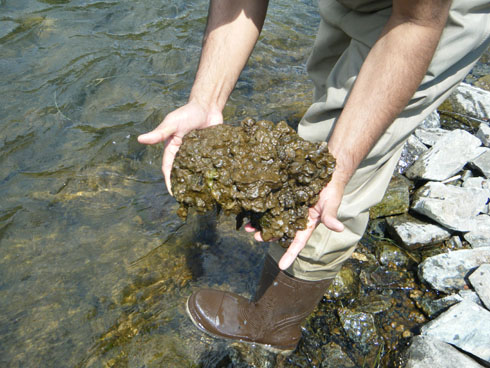 A rock from the bottom of Rapid Creek, covered with mats of Didymo. Image credit: Christine Sandvik

The concentration of phosphorus on Didymo mats far exceeds the level expected based on the nutrient content of surface waters, says Sundareshwar.

“The ability of the mats to store phosphorus is tied to the availability of iron in the water.”

Didymo cells adsorb, or condense on their surfaces, both iron and phosphorus. Then bacterial processes in the mat interact with iron to increase the biological availability of phosphorus.

The process results in abundant phosphorus for cell division, “and hence,” says Sundareshwar, “a resolution to the paradox of Didymo blooms in oliogotrophic streams and rivers.”

“It also has the potential to lead to discoveries that may stem this organism’s prolific growth in rivers around the world,” says Sundareshwar.

“This is how science is supposed to work–research conducted at one small creek in South Dakota can be translated to places across the globe.”

Co-authors of the paper are S. Upadhayay, M. Abessa, S. Honomichl, C. Sandvik, and A. Trennepohl of the South Dakota School of Mines and Technology; B. Berdanier of South Dakota State University and A. Spaulding of the U.S. Geological Survey in Boulder, Colo.