Again, but Faster! The Spectacular Courtship Dance of a Tiny Bird

“The male jumps like he’s been shot out of a cannon,” said study co-author Barney Schlinger, professor and departmental chair of integrative biology and physiology and a professor of ecology and evolutionary biology at UCLA. “It’s exquisite. He sails like an acrobat and lands perfectly on a perch, like a gymnast landing a flawless dismount. Not only is there power to his muscle contractions but incredible speed as well.” 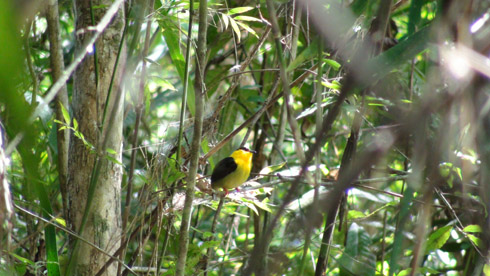 A golden-collared manakin in a rainforest near Gamboa, a town along the Panama Canal. Image credit: Julia Barske/UCLA Life Sciences

The findings will be published in the print edition of Proceedings of the Royal Society B, a leading British journal for biological sciences research, and are currently available in the journal’s advance online edition.

“This heart rate is extremely high; in the avian world, only hummingbirds have heart rates of 1,300 beats per minute,” Barske said.

“Our data suggest the courtship display is a proxy for survival capability,” Schlinger said. “To survive in the wild, it’s an advantage to have extra neuromuscular capability. Being faster can enable a golden-collared manakin to escape a predator.”

Golden-collared manakins (Manacus vitellinus) live in Panama, Colombia and Costa Rica. For the research, Barske spent three months in a rainforest near Gamboa, a town along the Panama Canal, not far from Panama City. She observed the birds for several hours daily, filmed 18 male birds with high-speed video and ultra–high-speed cameras that produced 125 images per second, and recorded their courtship success.

Barske can tell the birds apart from their leg rings and the location of their display arenas. Golden-collared manakins live up to 14 years in the wild.

During the courtship dance, several males gather together in a small area, and each jumps from small tree to small tree while making a fast, powerful, loud snapping sound with his wings. He also does this wing-snap while perched. When the male lands on a perch, he rapidly turns to expose his feathers to the female.

The male performs these feats “not necessarily because he wants to, but because that’s what the female rewards,” Schlinger said. “If the female rewards a slightly faster behavior, then the males will get faster. We propose that elaborate, acrobatic courtship dances evolve because they reflect the motor skills and cardiovascular function of males.”

During the six-month breeding season, a female will observe a group of four to six males — “the patch of forest erupts in sound,” Schlinger said — and choose one to mate with. The male offers no help in raising the offspring.

Co-authors of the study are Leonida Fusani, a faculty member in the department of biology and evolution at Italy’s University of Ferrara and a former postdoctoral scholar under Schlinger, and Martin Wikelski, a director of Germany’s Max Planck Institute for Ornithology and a faculty member at Germany’s Konstanz University.

In earlier research, Fusani conducted high-speed filming of male golden-collared manakins and performed a computer analysis that showed that each male has a unique dance, somewhat similar to how each gymnast performs differently from the others.

Schlinger has studied golden-collared manakins for 16 years because he “was so impressed with their fantastic behavior.

“Here is a very small, 17-gram bird that is living 14 years in the rain forest, telling everybody where they are,” Schlinger said. “They are there year after year.”

Female golden-collared manakins have a larger visual processing area in the brain than males, Schlinger’s previous research has shown, suggesting that females have a fast visual processing speed that enables them to detect slight differences in the male’s courtship dance.