Right Target, but Missing the Bulls-Eye for Alzheimer’s

Alzheimer’s disease is the most common cause of late-life dementia. The disorder is thought to be caused by a protein known as amyloid-beta, or Abeta, which clumps together in the brain, forming plaques that are thought to destroy neurons. This destruction starts early, too, and can presage clinical signs of the disease by up to 20 years.

For decades now, researchers have been trying, with limited success, to develop drugs that prevent this clumping. Such drugs require a “target” — a structure they can bind to, thereby preventing the toxic actions of Abeta.

Now, a new study out of UCLA suggests that while researchers may have the right target in Abeta, they may be missing the bull’s-eye. Reporting in the Jan. 23 issue of the Journal of Molecular Biology, UCLA neurology professor David Teplow and colleagues focused on a particular segment of a toxic form of Abeta and discovered a unique hairpin-like structure that facilitates clumping. 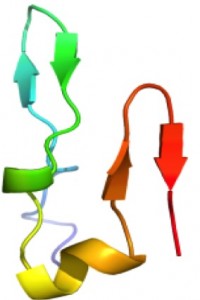 “Every 68 seconds, someone in this country is diagnosed with Alzheimer’s,” said Teplow, the study’s senior author and principal investigator of the NIH-sponsored Alzheimer’s Disease Research Center at UCLA. “Alzheimer’s disease is the only one of the top 10 causes of death in America that cannot be prevented, cured or even slowed down once it begins. Most of the drugs that have been developed have either failed or only provide modest improvement of the symptoms. So finding a better pathway for these potential therapeutics is critical.”

Abeta42 has long been thought to be the toxic form of Abeta, but until now, no one has understood how the simple addition of two amino acids made it so much more toxic then Abeta40.

In his lab, Teplow and his colleagues used computer simulations in which they looked at the structure of the Abeta proteins in a virtual world. The researchers first created a virtual Abeta peptide that only contained the last 12 amino acids of the entire 42–amino-acid-long Abeta42 protein. Then, said Teplow, “we just let the molecule move around in a virtual world, letting the laws of physics determine how each atom of the peptide was attracted to or repulsed by other atoms.”

By taking thousands of snapshots of the various molecular structures the peptides created, the researchers determined which structures formed more frequently than others. From those, they then physically created mutant Abeta peptides using chemical synthesis.

“We studied these mutant peptides and found that the structure that made Abeta42 Abeta42 was a hairpin-like turn at the very end of the peptide of the whole Abeta protein,” Teplow said.

The hairpin turn structure was not previously known in the detail revealed by the researchers, “so we feel our experiments were novel,” he said. “Our lab is the first to show that it is this specific turn that accounts for the special ability of Abeta42 to aggregate into clumps that we think kills neurons. Abeta40, the Abeta protein with two less amino acids at the end of the protein, did not do the same thing.”

Hopefully, the work of the Teplow laboratory presents what may the most relevant target yet for the development of drugs to fight Alzheimer’s disease, the researchers said.

Other authors on the study included Robin Roychaudhuri, Mingfeng Yang, Atul Deshpande, Gregory M. Cole and Sally Frautschy, all of UCLA, and Aleksey Lomakin and George B. Benedek of the Massachusetts Institute of Technology.

Funding for the study was provided by grants from the State of California Alzheimer’s Disease Research Fund, a UCLA Faculty Research Grant, the National Institutes of Health (AG027818, NS038328) and the James Easton Consortium for Alzheimer’s Drug Discovery and Biomarkers.