The researchers conclude that setting up a “trading market,” where farmers earn financial incentives for investing in eco-friendly techniques, would result in a double environmental benefit – reducing fertilizer run-off destined for the Chesapeake Bay, while at the same time capturing carbon dioxide headed for the atmosphere. 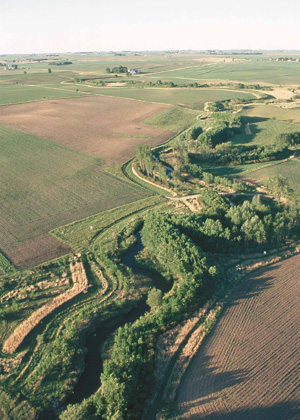 The study, Multiple Ecosystem Markets in Maryland, advises the state’s Department of the Environment how to set up a “nutrient trading market,” as proposed in the 2008 state climate action plan. This nutrient trading would operate alongside markets that sell carbon dioxide credits. The CIER study examines the effects of operating both markets simultaneously.

In these markets, farmers who reduce pollutants below a set level would earn credits. They would sell these credits to other operators, such as sewage and water treatment facilities or power plants that have difficulty meeting environmental targets. No direct government subsidies would be involved.

In these markets, farmers who reduce pollutants below a set level would earn credits. They would sell these credits to other operators, such as sewage and water treatment facilities or power plants that have difficulty meeting environmental targets. No direct government subsidies would be involved.

“Everybody can and should win from these markets,” says principal investigator Matthias Ruth, who directs the University of Maryland’s Center for Integrative Environmental Research. “This could represent an extra revenue stream for farmers, as well as an incentive to use the best nutrient practices that can help clean up the Bay and fight climate change. Taking these conservation steps costs the farmers money, and at the very least a reimbursement for their investment is well-deserved.”

Maryland is one of a handful of states considering whether to create these multiple markets. One key question for policy-makers is whether farmers who achieve reductions in watershed pollution while also capturing CO2 should be able to sell credits in both markets and, in effect, get dual payments for single action.

The study does not recommend a particular answer to this question, but offers policy-makers a series of scenarios – estimates of how the systems will work if farmers can participate in only one or both markets, and whether there should be thresholds before they can take part.

Another key question is whether sufficient carbon dioxide will be captured and traded to justify creation of the market. To determine this, CIER and the World Resources Institute developed a dynamic systems model and projected the likely volumes of carbon dioxide involved.

“As a practical matter, the carbon market will usually offer less financial reward than nutrient trading, because there isn’t that much CO2 captured in this way,” explains report co-author Rebecca Gasper, a CIER researcher. “To earn one water credit, a farmer must eliminate one pound of run-off pollutant. To earn one carbon credit, involves a reduction of one metric ton of CO2. It’s a lot easier for a power plant operator to achieve that than a farmer.” 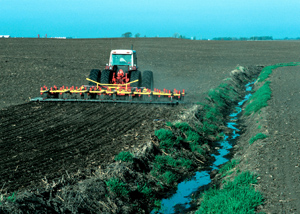 Without a buffer, excess fertilizer often ends up in the watershed. Image credit: University of Maryland

As an example of a best management practice providing the dual environmental benefit, the report points to conservation buffers – putting a green swath of trees or other plants between farm and stream to absorb run-off and filter out pollutants. But, this green buffer can also help capture carbon dioxide, and so help the state meet its CO2 reduction goals. Other practices likely to generate dual environmental benefits include conservation tillage, cover crops and wetland restoration.

The nutrient trading market would work similarly to the one set-up to reduce carbon emissions under RGGI, the multi-state Regional Greenhouse Gas Initiative that Maryland has joined.

The fulcrum of the nutrient market is a target level called the Total Maximum Daily Load. It’s the maximum amount of phosphorous and nitrogen that Maryland farmers can allow to run into streams. The U.S. EPA is expected to finalize this target in December.

If a farmer uses more eco-friendly methods and produces lower levels of pollutants that fall below this target, these can be sold as credits to someone else who is running above the target level. The trade would take place in the nutrient market.

“Setting up this system will require a delicate hand,” says Ruth. “Farmers taking part will face a steep learning curve, and if the system’s too complicated or burdensome, they’ll likely not take advantage of it.”

“In carefully thinking through the options for how to operate and potentially combine nutrient and carbon markets, Maryland is moving out in front as a national leader,” Gasper says. “Linking multiple markets is appealing because of its potential for preserving and restoring ecosystems – particularly if other Bay states decided to participate or set up their own programs.”

A copy of the full report is available online: