Discovery Triples Number of Stars in the Universe 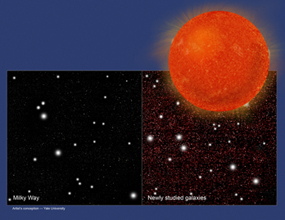 Astronomers detected the faint signature of small, dim red dwarf stars in nearby galaxies (right), and found they are much more numerous than in our own Milky Way (left). Image credit: Patrick Lynch/Yale University

Astronomers have discovered that small, dim stars known as red dwarfs are much more prolific than previously thought — so much so that the total number of stars in the universe is likely three times bigger than previously believed.

Because red dwarfs are relatively small and dim compared to stars like our Sun, astronomers hadn’t been able to detect them in galaxies other than our own Milky Way and its nearest neighbors before now. Therefore, they did not know how much of the total stellar population of the universe is made up of red dwarfs.

Now astronomers have used powerful instruments on the Keck Observatory in Hawaii to detect the faint signature of red dwarfs in eight massive, relatively nearby galaxies called elliptical galaxies, which are located between about 50 million and 300 million light years away. They discovered that the red dwarfs, which are only between 10% and 20% as massive as the Sun, were much more bountiful than expected.

“No one knew how many of these stars there were,” says Pieter van Dokkum, a Yale astronomer who led the research, which is described in Nature’s Dec. 1 Advanced Online Publication. “Different theoretical models predicted a wide range of possibilities, so this answers a longstanding question about just how abundant these stars are.”

The team discovered that there are about 20 times more red dwarfs in elliptical galaxies than in the Milky Way, notes Charlie Conroy of the Harvard-Smithsonian Center for Astrophysics, who was also involved in the research.

“We usually assume other galaxies look like our own. But this suggests other conditions are possible in other galaxies,” Conroy says. “So this discovery could have a major impact on our understanding of galaxy formation and evolution.”

For instance, Conroy explains, galaxies might contain less dark matter – a mysterious substance that has mass but cannot be directly observed – than previous measurements of their masses might have indicated. Instead, the abundant red dwarfs could contribute more mass than realized.

In addition to boosting the total number of stars in the universe, the discovery also increases the number of planets orbiting those stars, which in turn elevates the number of planets that might harbor life, van Dokkum notes. In fact, a recently discovered exoplanet that astronomers believe could potentially support life orbits a red dwarf star, called Gliese 581.

“There are possibly trillions of Earths orbiting these stars,” van Dokkum says, adding that the red dwarfs they discovered, which are typically more than 10 billion years old, have been around long enough for complex life to evolve. “It’s one reason why people are interested in this type of star.”

The discovery is just one example of the research being done by Yale astronomers at the Keck Observatory as part of a $12 million deal made last year, when Yale secured 15 nights of observing time annually over the next 10 years on the twin telescopes in Hawaii. The two 10-meter telescopes, jointly operated by the California Institute of Technology and the University of California, ushered in a new era of astronomy when they were built in 1993 and 1996 and remain the largest optical telescopes in the world.