Scientists use tools called gradients to understand how molecules interact in biological systems. Researchers from North Carolina State University have developed a new technique for creating biomolecular gradients that is both simpler than existing techniques and that creates additional surface characteristics that allow scientists to monitor other aspects of molecular behavior.

The new technique begins by creating a substrate, prepared in the lab of NC State professor Dr. Salah Bedair, out of the semiconductor material indium gallium nitride (InGaN). The substrate itself is a gradient, sloping from an indium-rich end (with a larger proportion of indium to gallium) to a gallium-rich end. The indium-rich end is more conducive to the formation of oxides. When exposed to humidity, negatively charged indium and gallium oxides form on the surface of the substrate. The substrate development for these purposes was proposed by Dr. Tania Paskova, a professor of electrical and computer engineering at NC State. 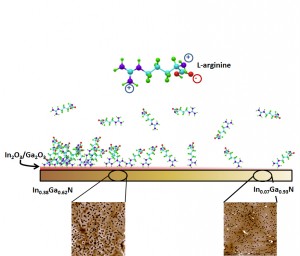 The new technique begins with a substrate made of indium gallium nitride. Negatively-charged oxides form on the surface, which then bind to the amino acid L-arginine. Image credit: Lauren Bain. (Click image to enlarge)

The researchers then put the substrate into a solution that contains an amino acid called L-arginine, which is positively charged at biologically relevant pH levels – such as those found in the human body.

“The L-arginine binds to the negatively charged oxides on the surface of the substrate,” says Lauren Bain, a Ph.D. student at NC State who is lead author of a paper on the work. “Because there is more oxide accumulation at the indium-rich end, there is a higher concentration of L-arginine at that end, and the concentration gradually declines along the surface of the substrate as you move toward the gallium-rich end.

“We studied L-arginine because it is small, but relevant. Because it is small, we could easily assess what was happening during our study,” Bain says. “But because it is a building block for proteins, we can build on this work to study full peptides and proteins – such as ligands that bind to cell receptors.”

“This technique also creates changes in the topography of the InGaN’s surface, based on the different crystalline structures within the material as its shifts from being indium-rich to being gallium-rich,” says Dr. Albena Ivanisevic, senior author of the paper. “This allows us to assess topographical differences in molecular adhesion, which is important, given the variety of topographies found in biological systems.” Ivanisevic is an associate professor of materials science and engineering at NC State and associate professor of the joint biomedical engineering program at NC State and the University of North Carolina at Chapel Hill.