A year after NASA’s Mars rover Curiosity’s landed on Mars, engineers at NASA’s Jet Propulsion Laboratory in Pasadena, Calif., are testing a sophisticated flight-control algorithm that could allow for even more precise, pinpoint landings of future Martian spacecraft.

“The Flight Opportunities Program supports both the development of innovative space technology and the emerging suborbital industry by using commercial suborbital vehicles to test concepts that could further mankind’s exploration and understanding of the universe,” said Christopher Baker, a campaign manager for the program. “The collaboration between JPL and Masten to test G-FOLD is a great example of how we hope to further the exploration of the solar system while building up the industrial base needed to advance future space endeavors.” 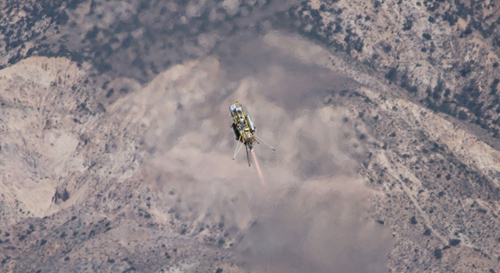 A Xombie technology demonstrator from Masten Space Systems, Mojave, Calif., ascends from its pad at Mojave Air and Space Port on a test for NASA’s Jet Propulsion Laboratory. The vehicle is a vertical-takeoff, vertical-landing experimental rocket. It is being used in collaboration with NASA Dryden Flight Research Center to evaluate performance of JPL’s Fuel Optimal Large Divert Guidance (G-FOLD), a new algorithm for planetary pinpoint landing of spacecraft. Image Credit: NASA/Masten

Masten Space Systems launched the Xombie July 30 from the company’s test pad at the Mojave Air and Space Port. JPL and Masten are planning to conduct a second flight test with a more complicated divert profile in August, pending data analysis.

To simulate a course correction during a Martian entry in the July test, Masten’s Xombie was given a vertical descent profile to an incorrect landing point. About 90 feet into the profile, the G-FOLD flight control software was automatically triggered to calculate a new flight profile in real-time, and the rocket was successfully diverted to the “correct” landing point some 2,460 feet away.

“This flight was an unprecedented free-flying demonstration of the on-board calculation of a fuel-optimal trajectory in real time,” said Martin Regehr, acting task lead for the Autonomous Descent Ascent Powered-Flight Testbed at JPL.

NASA Dryden also aided development of Curiosity’s “sky crane” landing system by conducting two series of pre-launch flight tests of its landing radar, the first under a helicopter in 2010 and a follow-on series with the radar housed in a Quick Test Experimental Pod mounted under the wing of a Dryden F/A-18 in June 2011. The 2011 tests focused on the on-chute acquisition portion of the Mars Science Laboratory’s entry into the Martian atmosphere, when the spacecraft was suspended from its parachute. Data collected from the flights were used to finesse the mission’s landing radar software to ensure that it was calibrated as accurately as possible prior to Curiosity’s landing.

JPL, a division of the California Institute of Technology, Pasadena, manages the Curiosity project for NASA’s Science Mission Directorate, Washington. For information about Curiosity’s accomplishments over the past year, visit: https://mars.jpl.nasa.gov/msl .