EAST LANSING, Mich. — Research by a team of Michigan State University scientists has shed new light on why some body parts are more sensitive to environmental change than others, work that could someday lead to better ways of treating a variety of diseases, including Type-2 diabetes.

The research, led by assistant zoology professor Alexander Shingleton, is detailed in the recent issue of the Proceedings of the Library of Science Genetics.

In particular, Shingleton is studying the genetics of fruit flies and zeroing in on why some of the insects’ body parts will grow to full size even when suffering from malnutrition, while others will not. He uses fruit flies because they use the same genes to control this process as humans.

“The developmental mechanisms by which these changes in body proportion are regulated are really unknown,” Shingleton said. 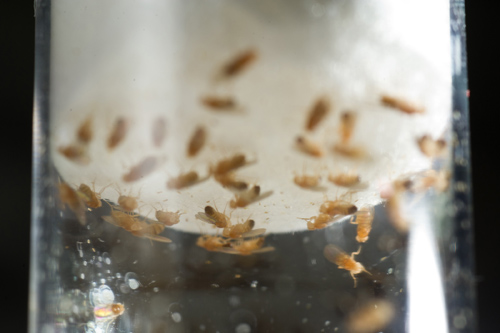 MSU assistant zoology professor Alexander Shingleton used fruit flies as a model for his research into why some body parts are more sensitive to environmental changes than others. Fruit flies use the same genes to control this process as humans do. Photo by G.L. Kohuth.

Shingleton said that in humans, a person’s brain will grow to near full size despite malnutrition or other environmental, or nongenetic, problems.

If scientists can figure out why some organs or body parts are either overly sensitive or insensitive to environmental factors, then it’s possible that therapies could be developed to deal with any number of maladies.

“If we know how we can control sensitivity to environmental issues such as malnutrition, we can, in principle, manipulate genes that are regulating that sensitivity,” Shingleton said. “Genes can be activated so they can actually restore sensitivity.”

Type-2 diabetes is a good example of the body’s insensitivity to nongenetic issues. The most common form of diabetes, Type-2, occurs when the body becomes insensitive to insulin, which is released in response to blood sugar levels. The body needs insulin to be able to use glucose for energy. 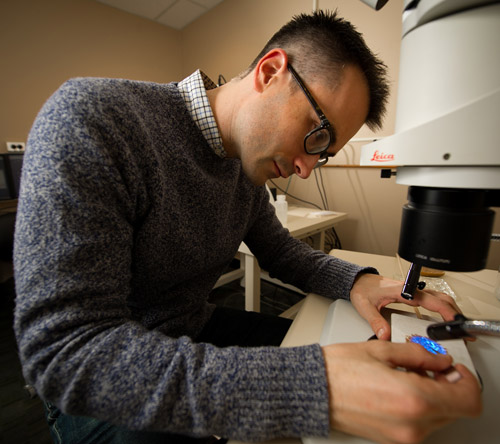 Alexander Shingleton, assistant professor of zoology, led an MSU team of researchers studying why some body parts are more sensitive to environmental changes than others, work that could someday lead to better ways of treating certain diseases. Image credit: Michigan State University

“In diabetes, that response is suppressed,” Shingleton said. “We get desensitization. We know people become insulin resistant, but we’re not quite sure why.”

What Shingleton and colleagues discovered is that even when malnourished, the genitals of a male fruit fly continue to grow to normal size.

Using the fruit fly for this type of research “gives us enormous information about how we as humans work and how we respond to our environment,” Shingleton said. “This provides information on biomedical issues that arise from things like malnutrition or insulin resistance.”

Shingleton’s research is funded by the National Science Foundation and MSU’s Bio/computational and Evolution in Action Consortium, or BEACON.