Researchers at Yale University have discovered new chemical compounds that prevent HIV from replicating in human T-cells. These compounds could result in new, highly effective HIV treatments that are 10 to 2000 times more potent than HIV drugs now on the market.

“The current compounds or slight variants could become drugs,” said Professor William L. Jorgensen, one of two principal investigators behind the research. The other is Karen S. Anderson, a pharmacology professor at Yale School of Medicine. They reported their results online Nov. 15 in the Journal of Medicinal Chemistry.

The new agents work by inhibiting the function of an enzyme essential for HIV’s replication. That enzyme is called HIV-1 reverse transcriptase.

Classed as non-nucleoside reverse transcriptase inhibitors, the compounds prevent HIV from converting its genetic material into DNA, a necessary step for the infection of human cells. 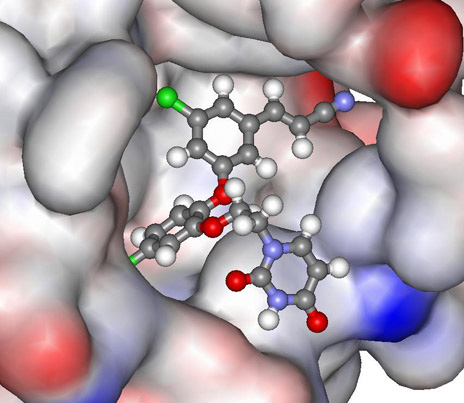 This illustration shows a new anti-HIV agent developed at Yale bound to an enzyme essential for the virus’ replication. Two such agents discovered at Yale could result in HIV drugs that are 10 to 2000 times more potent than those now on the market. (Image by William L. Jorgensen)

The discoveries mark another major achievement by Yale scientists in fighting HIV. In the 1980s, research by the late Yale professors William H. Prusoff and Tai-Shun Lin enabled the development of d4T, a reverse transcriptase inhibitor marketed under the trade name Zerit. More recent research by Yale pharmacologist Yung-Chi “Tommy” Cheng and co-inventors in Japan led to festinavir, a nucleoside reverse transcriptase inhibitor in development by Bristol-Myers Squibb.

Two of the new agents are extraordinarily potent against the predominant, “wild-type” form of HIV, which is highly adept at mutation, according to the researchers.

“The compound that we call JLJ494 is, I believe, one of the most potent compounds ever reported for inhibiting replication of wild-type HIV,” Jorgensen said.

These agents could allow for comparatively lower dosages, and also for prophylactic anti-HIV treatment, he said. Importantly, they also show very low toxicity towards human cells.

“This discovery represents a giant leap forward in the design of more selective and less toxic AIDS drugs ” said Anderson. “We are excited about continuing the development of this new class of anti-HIV compounds.”

A second, closely related compound, JLJ506, is also highly effective against wild-type HIV, as well as against two common mutant forms of the virus.

The Jorgensen-Anderson team’s iterative approach involved extensive computer modeling to design compounds that bind to the target enzyme. They then synthesized the most promising compounds and measured how they affected replication of the virus using live HIV and human T-cells.

Yale has filed a patent application covering the compounds, and the Yale scientific team continues to make new, related compounds.

“We’re not done yet,” Jorgensen said. “There are many details in drug discovery.”

Other members of the team are Mariela Bollini, Vinay V. Thakur, Ricardo Gallardo-Macias of Yale’s Department of Chemistry; and Robert A. Domaoal and Krasimir A. Spasov of the Department of Pharmacology at Yale School of Medicine.

The National Institutes of Health supported the research