How the Brain Strings Words Into Sentences

Advances in brain imaging made within the last 10 years have revealed that highly complex cognitive tasks such as language processing rely not only on particular regions of the cerebral cortex, but also on the white matter fiber pathways that connect them. 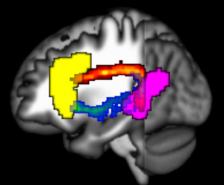 “With this new technology, scientists started to realize that in the language network, there are a lot more connecting pathways than we originally thought,” said Stephen Wilson, who recently joined the University of Arizona’s department of speech, language and hearing sciences as an assistant professor. “They are likely to have different functions because the brain is not just a homogeneous conglomerate of cells, but there hasn’t been a lot of evidence as to what kind of information is carried on the different pathways.”

Working in collaboration with his colleagues at the UA, the department of neurology at the University of California, San Francisco and the Scientific Institute and University Hospital San Raffaele in Milan, Italy, Wilson discovered that not only are the connecting pathways important for language processing, but they specialize in different tasks.

Two brain areas called Broca’s region and Wernicke’s region serve as the main computing hubs underlying language processing, with dense bundles of nerve fibers linking the two, much like fiber optic cables connecting computer servers. But while it was known that Broca’s and Wernicke’s region are connected by upper and a lower white matter pathways, most research had focused on the nerve cells clustered inside the two language-processing regions themselves.

Working with patients suffering from language impairments because of a variety of neurodegenerative diseases, Wilsons’ team used brain imaging and language tests to disentangle the roles played by the two pathways. Their findings are published in a recent issue of the scientific journal Neuron. 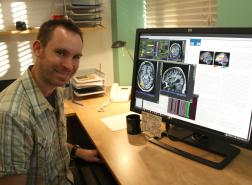 “With damage to the upper pathway, the opposite is true; patients name things quite well, they know the words, they can understand them, they can remember them, but when it comes to figuring out the meaning of a complex sentence, they are going to fail.”

The study marks the first time it has been shown that upper and lower tracts play distinct functional roles in language processing, the authors write. Only the upper pathway plays a critical role in syntactic processing.

Wilson collected the data while he was a postdoctoral fellow working with patients with neurodegenerative diseases of varying severity, recruited through the Memory and Aging Center at UCSF. The study included 15 men and 12 women around the age of 66.

Unlike many other studies investigating acquired language disorders, which are called aphasias and usually caused by damage to the brain, Wilson’s team had a unique opportunity to study patients with very specific and variable degrees of brain damage.

“Most aphasias are caused by strokes, and most of the strokes that affect language regions probably would affect both pathways,” Wilson said. “In contrast, the patients with progressive aphasias who we worked with had very rare and very specific neurodegenerative diseases that selectively target different brain regions, allowing us to tease apart the contributions of the two pathways.”

To find out which of the two nerve fiber bundles does what in language processing, the team combined magnetic resonance brain imaging technology to visualize damaged areas and language assessment tasks testing the participants’ ability to comprehend and produce sentences.

“We would give the study participants a brief scenario and ask them to complete it with what comes naturally,” Wilson said. “For example, if I said to you, ‘A man was walking along the railway tracks. He didn’t hear the train coming. What happened to the man?’ Usually, you would say, ‘He was hit by the train,’ or something along those lines.”

“But a patient with damage to the upper pathway might say something like ‘train, man, hit.’ We found that the lower pathway has a completely different function, which is in the meaning of single words.”

To test for comprehension of the meaning of a sentence, the researchers presented the patient with a sentence like, “The girl who is pushing the boy is green,” and then ask which of the two pictures depicted that scenario accurately.

“Those who have only lower pathway damage do really well on this, which shows that damage to that pathway doesn’t interfere with your ability to use the little function words or the functional endings on words to figure out the relationships between the words in a sentence.”

Wilson said that most previous studies linking neurodegeneration of specific regions with cognitive deficits have focused on damage to gray matter, rather than the white matter that connects regions to one another.

“Our study shows that the deficits in the ability to process sentences are above and beyond anything that could be explained by gray matter loss alone,” Wilson added. “It is the first study to show that damage to one major pathway more than then other major pathway is associated with a specific deficit in one aspect of language.”