Deforestation, considered by scientists to contribute significantly to global warming, has been shown by a Yale-led team to actually cool the local climate in northern latitudes, according to a paper published Nov. 17 in Nature.

“If you cut trees in the boreal region, north of 45 degrees latitude, you have a net cooling effect,” says Xuhui Lee, the study’s principal investigator and professor of meteorology at the Yale School of Forestry & Environmental Studies. “You release carbon into the atmosphere by cutting down trees, but you increase the albedo effect — the reflection of sunlight.” 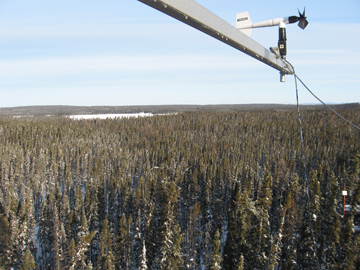 This photo was taken on an instrument tower in a black spruce forest in northern Quebec. The instrument is an anemometer for wind measurement. (Photo by Marc-Andre Giasson)

Lee and a team of researchers from 20 other institutions found that surface temperatures in open areas were cooler because snow cover reflected the sun’s rays back into outer space, while nearby forested areas absorbed the sun’s heat. At night, without the albedo effect, open land continued to cool faster than forests, which forces warm turbulent air from aloft to the ground.

“People are debating whether afforestation is a good idea in high latitudes,” says Lee. “If you plant trees you sequester carbon, which is a benefit to the climate system. At the same time, if you plant trees you warm the landscape because trees are darker compared to other vegetation types. So they absorb solar radiation.”

The researchers calculated that north of Minnesota, or 45 degrees latitude, the temperature decreased by an average of 1.5 degrees Fahrenheit. However, south of North Carolina, or 35 degrees latitude, deforestation appeared to cause warming. In addition, Lee said that “statistically insignificant” cooling occurred between these two latitudes.

The researchers collected temperature data from a network of weather stations in forests from Florida to Manitoba and compared results with nearby stations situated in open grassy areas that were used as a proxy for deforested land.

“The cooling effect is linear with latitude, so the farther north you go the cooler you get with deforestation,” says Lee.

David Hollinger, a scientist with the USDA Forest Service and study co-author, says, “Another way to look at the results is that the climate cooling benefits of planting forests is compounded as you move toward the tropics.”

The researchers call for new climate-monitoring strategies. “Because surface station observations are made in grassy fields with biophysical properties of cleared land, they do not accurately represent the state of climate for 30 percent of the terrestrial surface covered by forests,” the study says.

The study, “Observed Increase in Local Cooling Effect of Deforestation at Higher Latitudes,” was supported, in part, by grants from the U.S. Department of Energy and the Yale Climate and Energy Institute.