ANN ARBOR, Mich.—University of Michigan aquatic ecologist Donald Scavia and his colleagues say this year’s Gulf of Mexico “dead zone” is expected to be larger than average, continuing a decades-long trend that threatens the health of a $659 million fishery.

The 2010 forecast, released today by the U.S. National Oceanic and Atmospheric Administration (NOAA), calls for a Gulf dead zone of between 6,500 and 7,800 square miles, an area roughly the size of Lake Ontario.

The most likely scenario, according to Scavia, is a Gulf dead zone of 6,564 square miles, which would make it the Gulf’s 10th-largest oxygen-starved, or hypoxic, region on record. The average size over the past five years was about 6,000 square miles.

It is unclear what impact, if any, the Deepwater Horizon oil spill will have on the size of this year’s Gulf dead zone because numerous factors are at work, the researchers say.

“We’re not certain how this will play out. But one fact is clear: The combination of summer hypoxia and toxic-oil impacts on mortality, spawning and recruitment is a one-two punch that could seriously diminish valuable Gulf commercial and recreational fisheries,” said Scavia, Special Counsel to the U-M President for Sustainability, director of the Graham Sustainability Institute, and a professor at the School of Natural Resources and Environment. 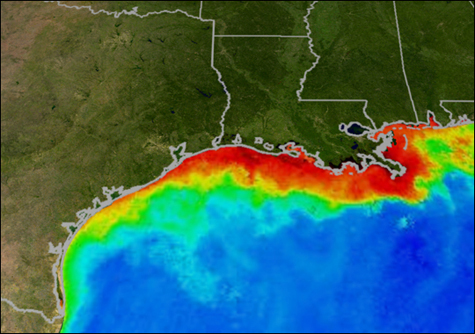 About the image above: The red and yellow areas show the approximate boundaries of a Gulf of Mexico dead zone from several years ago. Image credit: Graphic courtesy of NASA/Goddard Space Flight Center Scientific Visualization Studio.

Farmland runoff containing fertilizers and livestock waste—some of it from as far away as the Corn Belt—is the main source of the nitrogen and phosphorus that cause the annual Gulf of Mexico hypoxia zone. Each year in late spring and summer, these nutrients flow down the Mississippi River and into the Gulf, fueling explosive algae blooms there.

When the algae die and sink, bottom-dwelling bacteria decompose the organic matter, consuming oxygen in the process. The result is an oxygen-starved region in bottom and near-bottom waters: the dead zone.

This year, the situation is complicated by uncertainties related to the Gulf oil spill.

If sufficient oil reaches the area typically subject to summer hypoxia, the size of this summer’s Gulf dead zone could increase for two reasons: microbial breakdown of oil—which consumes oxygen—and the oil’s potential to reduce diffusion of oxygen from the air into the water, the process that normally replenishes oxygen levels in the water column, Scavia said.

On the other hand, the presence of oil could restrict the growth of hypoxia-fueling algae, helping to limit the size of the Gulf dead zone.

The five largest Gulf dead zones on record have occurred since 2001. The biggest occurred in 2002 and measured 8,484 square miles.

“The growth of these dead zones is an ecological time bomb. Without determined local, regional and national efforts to control them, we are putting major fisheries at risk,” Scavia said.

The computer models that generate hypoxia forecasts have been used to determine the nutrient-reduction targets required to shrink the size of the Gulf dead zone. The models rely on U.S. Geological Survey estimates of the amount of nitrogen feeding into the Gulf from the Mississippi and Atchafalaya rivers.

Hypoxia is of particular concern because it threatens valuable commercial and recreational Gulf fisheries. In 2008, the dockside value of commercial fisheries was $659 million. The 24 million fishing trips taken in 2008 by more than 3 million recreational fishers further contributed well over $1 billion dollars to the Gulf economy, according to NOAA.

“As with weather forecasts, this prediction uses multiple models to predict the range of the expected size of the dead zone,” said Robert Magnien, director of NOAA’s Center for Sponsored Coastal Ocean Research. “The strong track record of these models reinforces our confidence in the link between excess nutrients from the Mississippi River and the dead zone.”

The 2010 spring nutrient load transported to the northern Gulf of Mexico is about 11 percent less than the average over the last 30 years, said Matt Larsen, USGS associate director for water.

“An estimated 118,000 metric tons of nitrogen, in the form of nitrate, were transported in May 2010 to the northern Gulf,” Larsen said.

The Gulf hypoxia research team is supported by NOAA’s Center for Sponsored Coastal Ocean Research and includes scientists from the University of Michigan, Louisiana State University and the Louisiana Universities Marine Consortium.

The official size of the 2010 Gulf hypoxic zone will be announced following a NOAA-supported monitoring survey led by the Louisiana Universities Marine Consortium, July 24 through Aug. 2.