COLUMBIA, Mo. ­­­–When the Missouri River flooded in 1993 and 1995, it left a deep layer of sandy silt that covered thousands of acres of rich farmland. Now, MU forestry researchers may have found a crop that can survive a flood and act as a sustainable source of biomass.

During the 1993 flood, Gene Garrett, forestry professor and former director of the Center for Agroforestry, observed that cottonwood trees seemed to thrive in the flood waters.  As a result, Garrett, John Dwyer and Hank Stelzer, associate professors in forestry, initiated a study at the flood laboratory at the University of Missouri Horticulture and Agroforestry Research Center (HARC), to identify superior cottonwood “clone” trees  that would tolerate flood conditions.

The clones trees selected for the study were chosen based upon above-ground production of biomass. The researchers found that seed sources from Mead-Westvaco Corporation and Iowa State University survived and grew under flooded conditions. These results are promising when considering the economic potential for biomass production in the floodplains of Missouri. 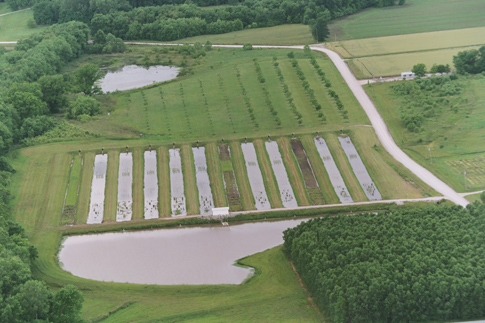 About the image: Located in New Franklin, Mo., the MU flood lab, recognized as the most realistic flood simulator in the Midwest, features 24 two-foot-deep flood channels that can be flooded individually and drained to simulate a variety of flood conditions. Image credit: University of Missouri

“Among the fastest growing trees in North America, cottonwoods can be profitable,” Garret said. “They can be used for biomass, paper, rough-cut lumber for home framing, and interior lumber for cabinets. They thrive in boggy and sandy areas that can no longer sustain traditional crops.”

Located in New Franklin, Mo., the HARC flood lab, recognized as the most realistic flood simulator in the Midwest, features 24 two-foot-deep flood channels that can be flooded individually and drained to simulate a variety of flood conditions.

Given the capability to independently adjust the channels for water depth, standing or flowing water, and duration of flooding, the lab allows researchers to determine the flood tolerance of selected grasses, legumes and tree species. 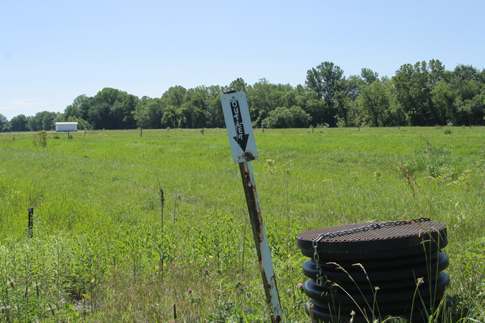 About the image: Water in each individual channel can be raised or lowered, depending on the research needs. The white pump house, visible in the background, moves the water from the pond to the channels. Image credit: University of Missouri

“Before the MU flood lab, we had little scientific evidence on which trees were flood tolerant,” Garrett said. “Data on tree flood tolerance, as well as information about commercial markets for cottonwoods, are being given to Missouri farmers who now have more options in their bottomlands that are prone to flooding”

Dwyer also received a Mizzou Advantage grant to search for economical ways to reduce the consumption of fossil fuels by planting bio-energy plantations that provide woody biomass.Mizzou Advantage was created to increase MU’s visibility, stature and impact in higher education locally, statewide, nationally and around the world.

An important first step in initiating the program is a round of grants, totaling more than $900,000, that will fund 26 networking and other projects. MU officials’ goal is that Mizzou Advantage will strengthen existing faculty networks, create new networks and propel Mizzou’s research, instruction and other activities to the next level.