When Li Liao, associate professor in the University of Delaware Department of Computer and Information Sciences, saw Roger Craig’s almost-perfect GRE score while Craig was applying to graduate school at UD, the faculty member said to himself, “Wow, this guy is smart.”

Liao says he took a chance on Craig, who had no formal training in computer science. Craig would go on to exceed his adviser’s expectations, studying bioinformatics and earning master’s and doctoral degrees in computer and information sciences at UD.

Craig also would set several records on the Jeopardy! quiz show in 2010 and 2011, among them, the all-time record for single-day winnings ($77,000). Craig said that when he hit the daily doubles, he almost always bet everything.

It’s important to take chances, especially when you know the probability of success, Craig, now CEO of Cotinga LLC, a predictive analytics consulting firm he co-founded, told the audience at the Graduate Student Forum on Friday, May 4, at Clayton Hall. The event was organized by the Graduate Student Senate with funding support from the Office of Graduate and Professional Education. 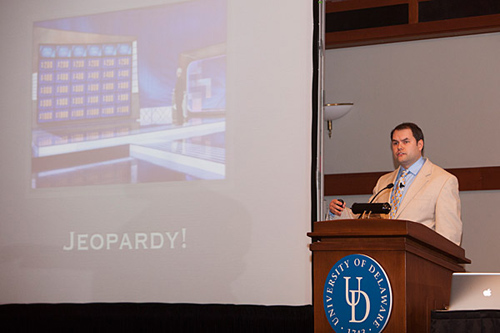 UD alumnus Roger Craig shares the keys to his success on the quiz show "Jeopardy!" and beyond with UD graduate students at the Graduate Student Forum. Craig received his master of science and doctoral degrees in computer and information sciences. Photo by Ambre Alexander

A total of 160 graduate students registered to attend the forum, which featured oral and poster presentations by graduate students. Topics ranged from the use of nanomedicine to revolutionize cancer therapy, to the restoration of Old Master paintings.

During his keynote talk on leadership and innovation, Craig shared these take-away messages: Deliberate practice and preparation are essential, there is a myth about having innate talent, and you can’t do it alone.

Speaking to his success on Jeopardy!, Craig said he “reverse engineered” the game by using J! Archive, the online archive of past questions developed by fans. Without this tool, he says he would not have been able to achieve what he did.

Craig downloaded all of the questions and put them into a database. Through data-mining and text-clustering, he identified the topics most likely to occur in game questions, and tested himself using his own program. Last summer, Craig gave a presentation at New York University about the technique, which he refers to as “Knowledge Tracking.” 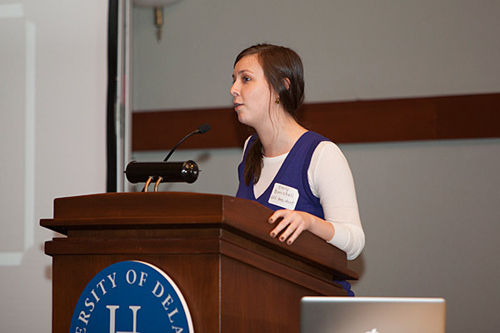 Craig’s self-analysis included a visual of bubbles representing a statistical snapshot of his brain relative to Jeopardy!, and how it would fare in the category of architecture, for example, which is more highly valued than other categories.

“You want to identify the stuff you don’t know,” explained Craig, whose undergraduate degree is in biology and biochemistry.

With this insight into his “quantified self,” Craig had opened the gateway to “efficient learning,” identifying the subject categories to attack in order.

“I wasn’t the smartest or the fastest – I just had one of the most scientific, data-driven study methods,” Craig said.

While Craig took a rational, data-driven approach to winning at Jeopardy, one thing he didn’t predict was how he would feel when he won.

He couldn’t sleep from all the excitement and blames a lack of sleep and “being out of shape” for his demise in game 7. 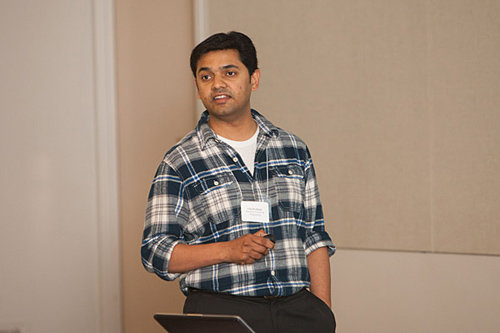 Vinu Krishnan, doctoral student in materials science and engineering, presents on "Nanomedicine to Revolutionize the Future of Cancer Therapy." Photo by Ambre Alexander

Later, presented with the opportunity to compete in the Tournament of Champions, Craig vowed to lose 10 pounds to boost his mental agility and to look good on camera. He tracked everything he ate and used the Google My Tracks app in his quest to exercise more.

Asked by a student what he did with the money, Craig said he paid taxes, paid bills and stashed some away. His biggest purchases: an iPad and a couple of trips with his girlfriend.

Now leading his own company, Craig has lots of ideas for the future, including other ways to put his “Knowledge Tracking” to use. 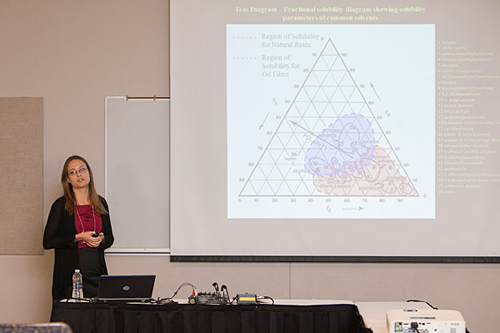 In her presentation, "Restoring Old Master Paintings: Art Conservation and the Science of Cleaning," Kristin deGhetaldi, doctoral student in preservation studies, took her peers through her remarkable restoration of "Portrait of a Young Woman in White" at the National Gallery of Art. Photo by Ambre Alexander

He wonders why we can’t keep records on every test taken in school and college, just like we have a medical record.

“When you have this data, it becomes so powerful,” he says. “It could be an early warning system for people with learning disabilities or for Alzheimer’s.”

He also envisions textbooks being dynamically generated some day.